Besides the fact that he writes articles for a magazine (most) people don’t buy to read, his entire CNN career arose because Sarah Huckabee Sanders apparently one time hurt his feelings.

Karem had his press pass suspended on August 2 (a la Acosta did last year) and, like in that case, the White House was on the losing end as, on September 3 a federal judge demanded that Karem have his pass restored. The suspension stemmed from his July 11 meltdown and near scuffle with Salem Radio Networks host Sebastian Gorka.

A federal judge ruled against the White House on Tuesday and ordered President Trump and press secretary Stephanie Grisham to immediately restore the press credentials of Brian Karem, a Playboy columnist and CNN political analyst.

"Karem has shown that even the temporary suspension of his pass inflicts irreparable harm on his First Amendment rights," US District Court Judge Rudolph Contreras wrote in his opinion.

Reacting to the decision, Karem told CNN, "It's good for me, but it's great for the free press. Today was about all of us."

Ah yes. Cloaking onself in the First Amendment is perhaps one of the things the press does better than, well, actually doing their jobs.

Reacting to the news, the pompous clown offered a tweet of himself posing with a gray background making a peace sign with the caption: “God bless the Constitution, free speech, due process and [Ted Boutrous] and his great legal team.”

Hours earlier, Karem showed what a detestable insult he is to the idea of journalism (even though his behavior is the perfect symbol of how far the industry has fallen) by offering this tweet about Senate Majority Leader Mitch McConnell (R-KY): 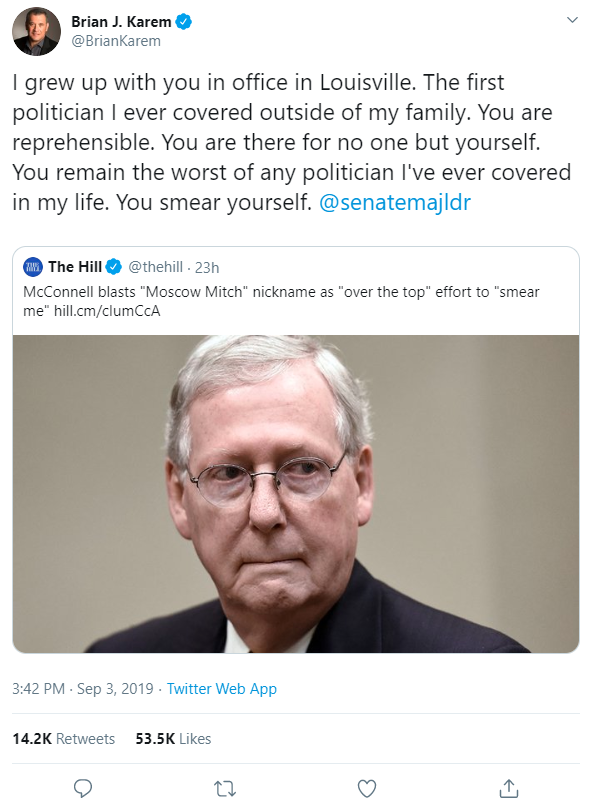 Needless to say, this is the sort of behavior that’s continually accepted by bosses Sam Feist and Jeffrey Zucker along with CNN colleagues like Wolf Blitzer, Alisyn Camerota, Chris Cuomo, and Brian Stelter to name a few.