Needless to say, it’s safe to assume that CNN and Jeffrey Zucker are proud of political analyst and Playboy White House correspondent Brian Karem following his shouting match Thursday with Salem Radio Network host Sebastian Gorka. If so, it would further illustrate why CNN isn’t a serious news organization.

After the President’s summit on social media censorship and his remarks about citizenship (which CNN panned), someone could be heard on any number of videos from the scene (presumably Security Studies Group’s Jim Hanson) telling Karem, “Don’t be sad. Don’t be sad.”

Instead of ignoring the crowd and walking away, Karem decided to make a scene while others like colleague Jim Acosta could cry foul afterward, telling no one in particular: “No, I’m just standing around. This is a group of people who are eager for demonic possession.”

While some laughed, Gorka wasn’t impressed, yelling: “You are a journalist, right?”

Karem continued to up the ante, seemingly challenging Gorka to a fight: “Hey, come on over here and talk to me, brother. We can go outside and have a long conversation.”

As most would, Gorka was exasperated, charging over to Karem and while asking him if he’s indeed “[y]ou’re threatening me in the Rose Garden.”

“You are a punk. You’re not a journalist. You’re a punk,” Gorka added before walking away.

Again refusing to be a professional and instead act like an immature teenager, Karem screeched to Gorka that he should “go home” and “get a job.” Whatever that means.

Hilariously, a woman on the video could be heard shouting in Gorka’s direction that “you should not be attacking journalists like this” while another snowflake wondered if “mocking reporters means freedom.” 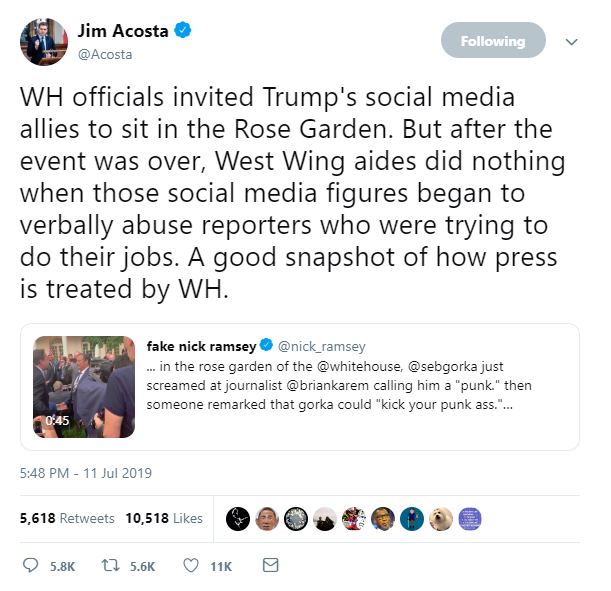 In a White House where the administration has eliminated press briefings and taken away passes that allow reporters access to the building, the upside down press conference had the air of prophecy. It was a glimpse of a future where the president leaves major media outlets on the outside and instead speaks to a handpicked groupof admirers.

Yet even in front of his friendly audience, Trump’s willingness to engage with the media was limited. The Rose Garden event was billed as a “news conference,” which typically includes at least a couple of questions and White House staffers were seemingly prepared for that, with microphones at the ready. However, when he was done speaking about his latest executive order, Trump turned and walked back into the Oval Office without taking questions — even from members of the right-wing press.

In an email to Yahoo News shortly afterwards, Karem said the incident began when he “invited him [Gorka] to go and talk outside.”

“I didn't think the Rose Garden was the appropriate setting. But he took it to mean, as he later explained, that I wanted to be physical,” Karem said. “My intention was never to provoke a physical confrontation in the Rose Garden.”

Karem also said he went up to Gorka after their exchange and offered to shake hands, but Gorka refused.

Apparently, journalists are allowed to yell at people under the First Amendment. But everyone else? Possibly not because it’s dangerous. My goodness journalists are so insufferable.

Hanson’s version of the video concluded with the kicker as he told Karem: “Just for the record, [Gorka would] kick your punk ass.”

No word on whether Oliver Darcy and Brian Stelter will go on tangents to suggest that this showcases why America is unsafe for journalists and that such criticism of the press must be curtailed.