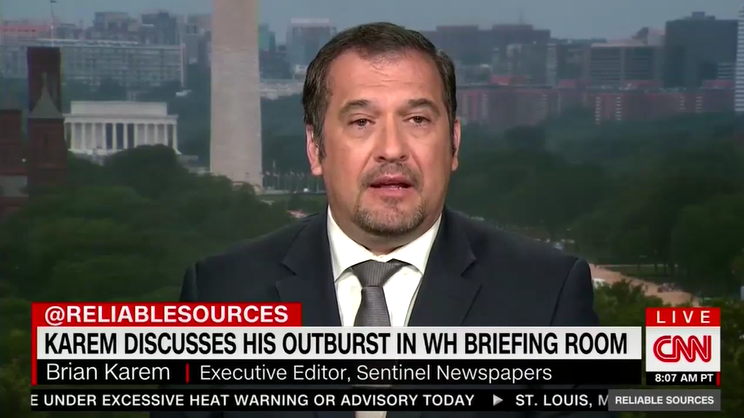 [Two executives of the Media Research Center attended, and neither needed an exorcism.]

Karem's "wisecrack" started a verbal battle with former Trump aide Sebastian Gorka, who yelled from a distance "And you’re a journalist, right?” Karem replied, “Come on over here and talk to me, brother. We can go outside and have a long conversation.” Gorka came over and yelled "You’re a punk! You’re not a journalist! You’re a punk!”

On his Twitter account, Karem proclaimed "I can and will appeal this decision." Playboy hired lawyer Ted Boutrous to appeal, the same lawyer CNN used to reinstate their Senior Screamer, Jim Acosta. Boutrous tweeted "The only person who should be banned from the White House as a result of this exchange between @BrianKarem and @SebGorka is @SebGorka."

Playboy also tweeted like they're a First Amendment giant instead of a naked-girly magazine. "Suspension of credentialed press by the government is incredibly concerning. We are working with our lawyers to appeal the decision to suspend. @briankarem. Since 1953, Playboy has fought to protect First Amendment rights, and the fight must continue today."

This decision is a little slow in coming, three weeks after that fight. Trump took questions from Karem on Friday. Brian Stelter reported this is a "preliminary decision," and Karem has a few days to submit a response.

Stelter suggested "I think both Karem and Gorka came away looking bad. But Karem is a fixture at the W.H. Trump fielded one of his questions on Friday. Even if you absolutely disagree with his approach to the job, this suspension seems like it could be the top of a slippery slope..."

Karem is not a "fixture." He's more of a "fixture" on CNN, where passionately hating Trump boosts your career.  I suspect this suspension will be quickly reversed. But I also suspect that's not the point. It's a chance to remind everyone that Karem is another screeching egotist that CNN pretends is a worthy representative of journalism.

This is not a "slippery slope." The "democracy dies in darkness" dramatists like Stelter predicted some tremendous crackdown on the liberal media that's never really materialized. Failing to schedule a briefing to let Acosta yell is not a crackdown.

We like briefings, because they expose the leftists caterwauling about "demonic possession." But they often energize the 90-percent-negative networks.

Check out the lamest hits of Brian Karem here.