Surprise: Networks Give Over 28 Minutes to Alleged Murder of Cop by Illegal Immigrant [UPDATED] 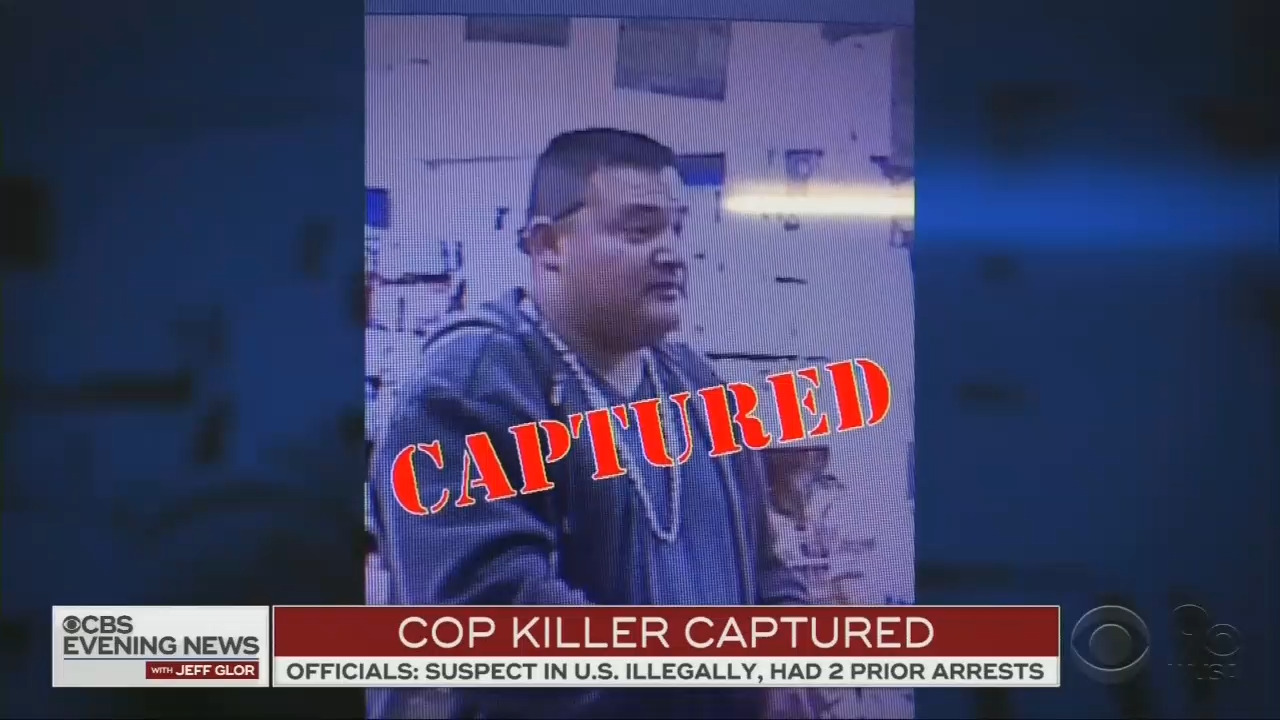 UPDATE, 7:16 p.m. Eastern: All three Friday night network newscasts gave full reports on the arrest of the illegal immigrant who allegedly murdered Singh (along with five others who allegedly assisted the suspect in avoiding law enforcement). This brought the total of coverage to 28 minutes and 21 seconds.

The CBS Evening News again led the newscast with the latest developments from and fill-in anchor/NFL Today host James Brown correspondent CBS’s Mireya Villarreal, totaling two minutes and 49 seconds. ABC’s World News Tonight was next with two minutes and 22 seconds and then NBC Nightly News in third with one minute and 22 seconds.

While MSNBC has been out to lunch on the Christmas night murder of Newman Police Cpl. Ronil Singh allegedly by an illegal alien, the broadcast networks of ABC, CBS, and NBC have surprisingly given this story heavy coverage to the tune of over 20 minutes over the last three days.

Fortunately, the Sacramento Bee reported that an arrest has been made in Singh’s death, citing law enforcement officials as having told them that a suspect “was arrested in Bakersfield either Thursday night or Friday morning.” The Bee added that there would be a press conference on Friday afternoon. 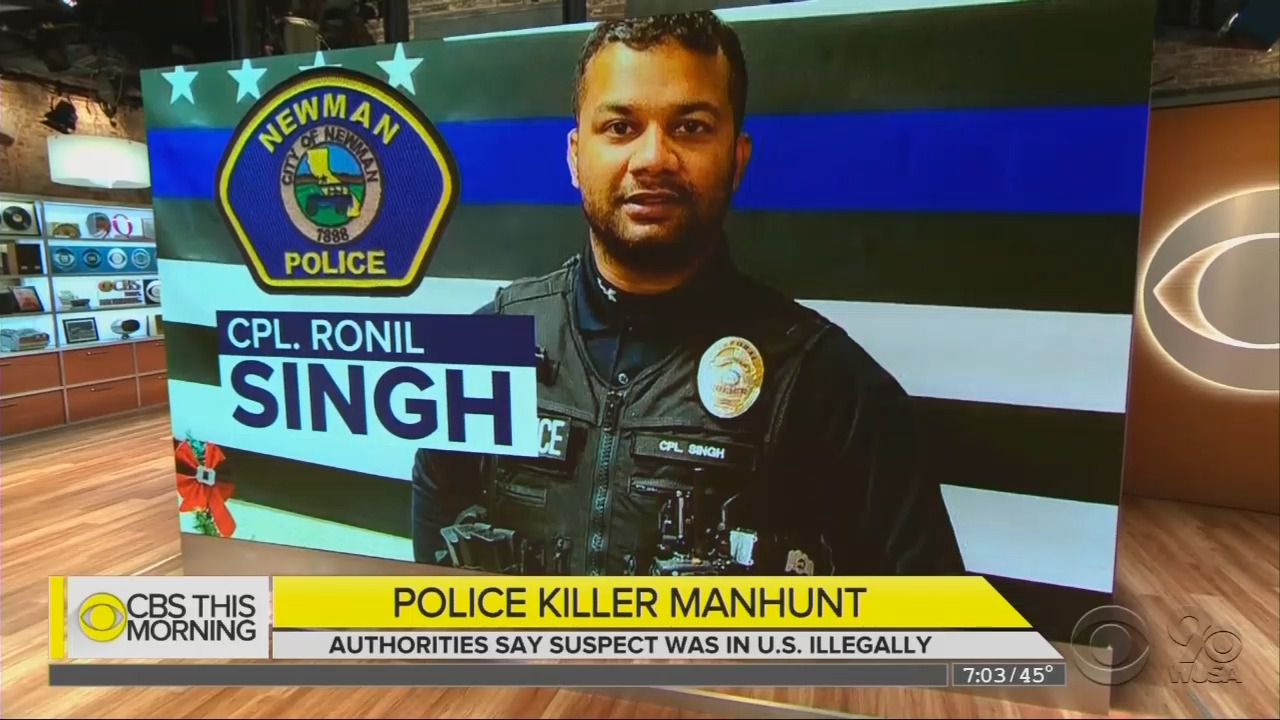 As for the media coverage, it first started rolling in on the Wednesday evening newscasts and through the Friday morning shows, ABC, CBS, and NBC have given 21 minutes and 48 seconds to the manhunt for Singh’s killer. Further, all stories were full segments and not news briefs.

For a cable breakdown of this story, my colleague Brad Wilmouth has a piece here.

As expected, CBS led the way with the most coverage, giving Singh’s murder and the manhunt 10 minutes and one second. The CBS Evening News started covering it on Wednesday and, along with CBS This Morning, the network has diligently kept viewers updated.

In fact, this disturbing crime by yet another illegal alien led off Thursday’s CBS Evening News and Friday’s CBS This Morning.

Speaking of ABC, their newscasts (Good Morning America and World News Tonight) have dedicated eight minutes and six seconds since Wednesday night. NBC’s Today and NBC Nightly News came in last with three minutes and 41 seconds. On top of that, NBC didn’t acknowledge the manhunt for this armed and dangerous individual until Thursday night.

To give a shoutout to the network correspondents doing admirable work reporting on Singh’s murder and avoided making President Trump’s tweets the center of attention, they include ABC’s Will Carr and Clayton Sandell, CBS’s Mireya Villarreal, and NBC’s Morgan Chesky. 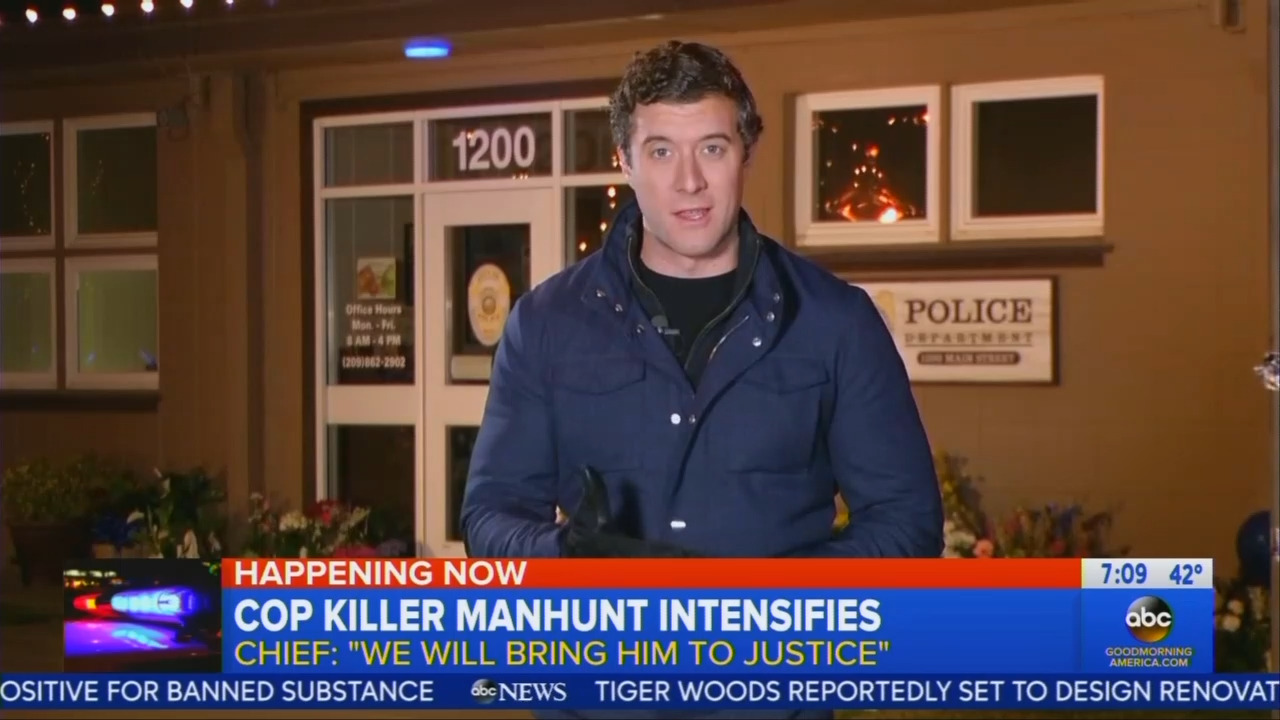 The illegal immigrant wanted by California cops for the murder of one of their own may have connections to a Mexican-American street gang, according to an image circulating on social media confirmed as authentic by investigators.

The photo shows the alleged “cop-killer” posing in a tank-top shirt, with a metal chain necklace draped around his neck and a large flaming skull tattoo visible on his right arm. Underneath the tattoo is the word “$ur3no$,” which, according to police in Washington State, is Spanish for “southerners”.

“Sureños are a group of Mexican-American street gangs with origins in southern California (south of Bakersfield),” reads a profile on the group in a police gang recognition guide. “The gang has allegiance to the [California] prison gang, Mexican Mafia, aka “La Eme”.

Ten alleged members of the Sureños gang were charged in April for their suspected roles in seven murders in the Bay Area dating back to 2006, the Los Angeles Times reported.

Appearing on the Fox News Channel’s Ingraham Angle late Thursday, Stanislaus County Sheriff Adam Christianson told fill-in host Lisa Boothe that “Officer Singh really should be the focus of this investigation and his sacrifice but I also want everybody to know that immigration is good for America if done legally.”