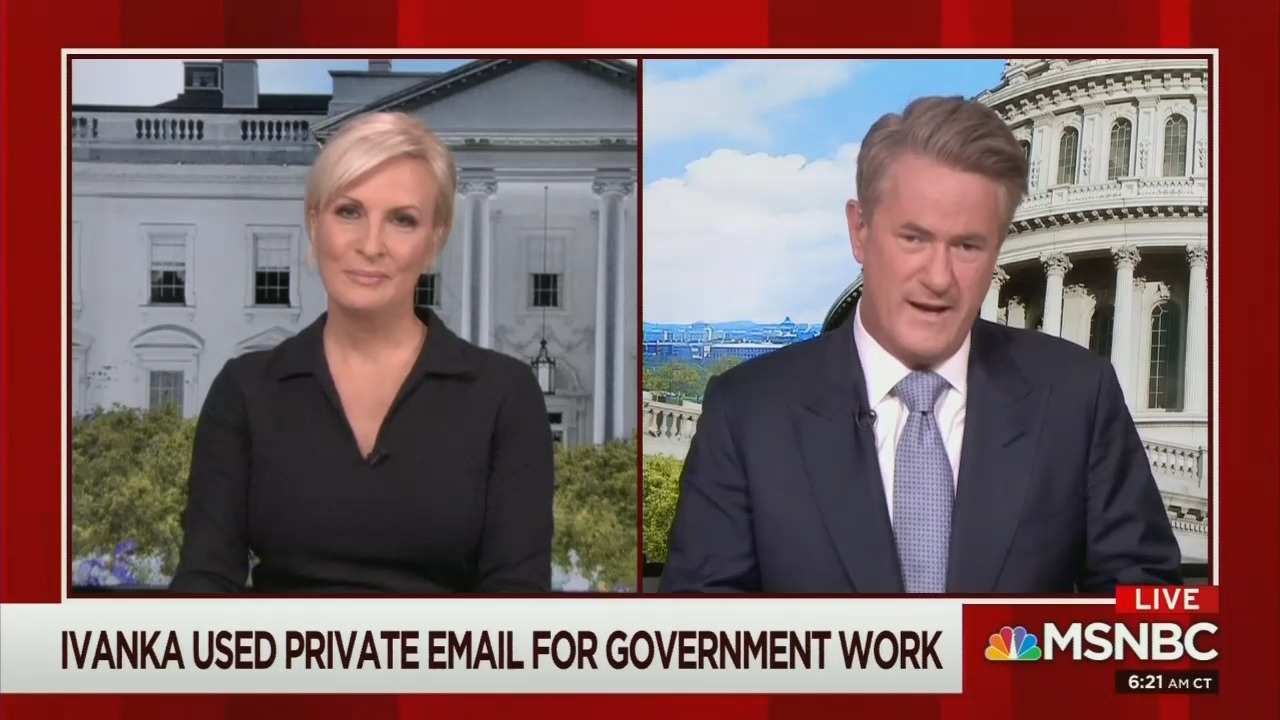 On Tuesday, MSNBC’s Morning Joe co-hosts and former Trump enthusiasts dedicated just over five minutes more airtime during their first show after a Washington Post scoop about Ivanka Trump using a private e-mail address to conduct official government business than they did on March 3, 2015 for the first show since The New York Times blew the whistle on Hillary Clinton’s private e-mail address and server.

All told, the 2018 version of co-hosts/lovers Mika Brzezinski and Joe Scarborough spent 54 minutes and 8 seconds on Ivanka Trump’s e-mail story that was initially broken in October 2017 by Politico, but facts be damned. In contrast, they gave 49 minutes and 3 seconds to the Clinton scandal. Both included the tradition repeats of initial segments in the 8:00 a.m. Eastern half-hour.

“So we don't know, Mika, whether judges are going to be required to get involved in the future...But, boy, a lot more questions than answers this morning...Public records are public and they have to be preserved. Now, no one is expected her father and his constitutionally challenged followers to start screaming for Ivanka to be locked up,” Scarborough lamented.

The faux Republican made the case that this was far more serious because “she has far more access to the president of the United States than Hillary Clinton ever did in the Obama administration.”

Meanwhile, Brzezinski opined that Ivanka’s actions belong “in the category of hypocrisy, lack of self-awareness with a dab of irony.” 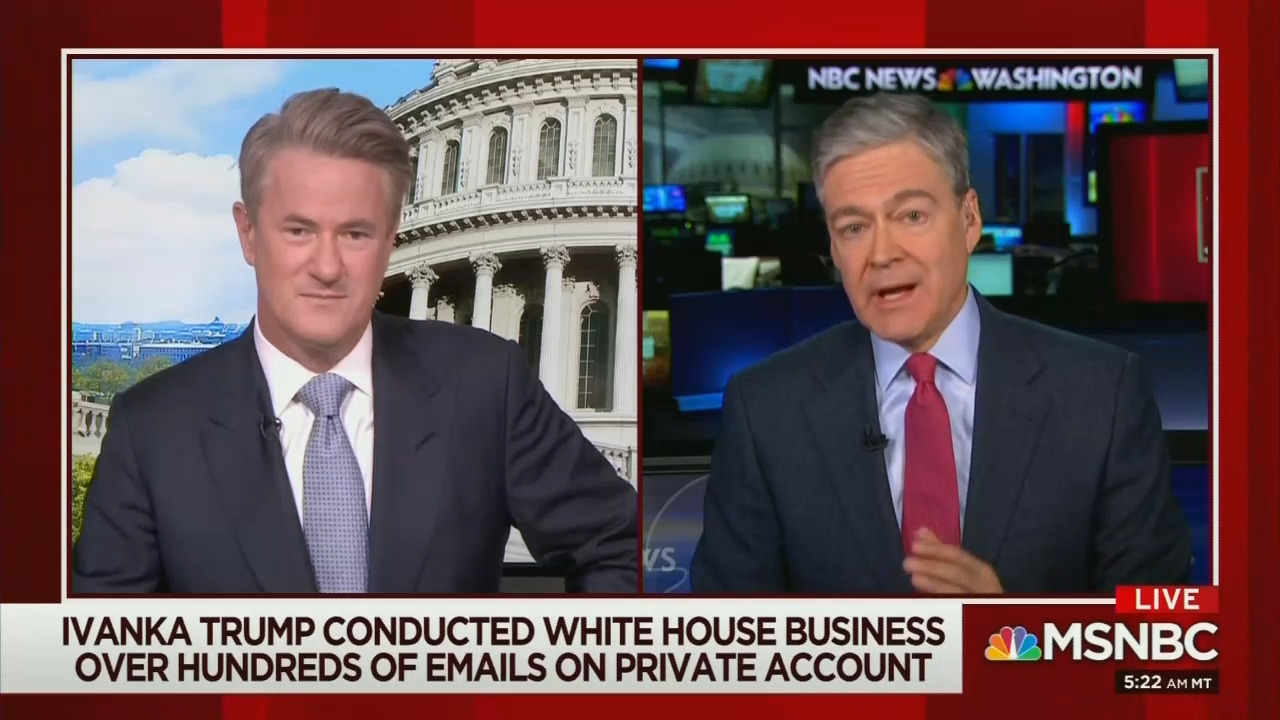 Without evidence, Scarborough insisted that everyone knew in the Trump orbit because “there is no way — they’re ignorant” as “these Trumps...don’t understand government” and aren’t “chained to history.”

Embracing his role as a liberal hack, CNBC Washington correspondent John Harwood defended Clinton because she was rightfully “paranoid” of the media and Republicans attacking her, so that was why she “wasn’t able to be authentic” (click “expand”):

I also think just on this e-mail situation with Ivanka, it is plain that that was an entirely, almost entirely disingenuous scandal during 2016. I don’t think Democrats are going to spend a whole lot of time flapping their gums about Ivanka Trump’s emails simply because they’re different from Republicans. Republicans used that as a tool. Democrats, I think, in the majority, in the Congress are going to decide that they got bigger fish to fry than being as disingenuous as the Republicans were about Hillary Clinton's emails....Look I think the media has got a lot to answer for about the 2016 campaign. It was obvious, to me, during most of the 2016 campaign that the Hillary Clinton e-mail scandal was about one thing. It's about her protection of information and by the way, public officials generally try to evade transparency as much as possible....You hear these excuses from Ivanka Trump, this was about scheduling. Don't we remember that Hillary Clinton said well half the e-mails that I didn't turn over is about yoga classes and that sort of thing....Look, I think the decision by Hillary Clinton to have a private server and do her non-classified e-mail off of the State Department non-classified system was about trying to protect her information and the fact as you just said she had been pursued by Republicans for years and she's kind of paranoid. That was a problem that she had in her leadership. She wasn't able to be open and authentic and it — it — it crippled her candidacy.

Harwood continued with more lunacy, downplaying Hillary’s matter as a “trivial” “nothing burger” since “there was nothing of significance” found (click “expand”):

However, I do — and on Mika's point I'm not saying the e-mails may not be important for Ivanka Trump or for Hillary Clinton for that matter depending on what's in them. When we saw the Hillary emails released, it was all a nothing burger. There was nothing of — of significance there, this — the classified, the existence ever some trivial amount of some classified information and that classified stuff that was in there was kind of trivial showed that it was empty as a scandal. Now, if Ivanka Trump was actually using that private e-mail to do the self-serving private, money-making actions that we're looking at right now in terms of what's already in the public record, yes that will be important. It depends on the content of the e-mail, not the fact that you have a private e-mail or used GMail as opposed to your government account.

Think what Harwood said was on point? Look no further than the liberal sages over at Politifact to prove this nonsense wrong.

Brzezinski similarly fretted that “we made vicious fun of her and it’s pretty tough for her.”

The Daily Beast’s Sam Stein similarly complained that “the media really did obsess over the Clinton story in 2016” and cited TV Eyes finding only one mention from Fox & Friends in their first hour about Ivanka. Brzezinski and Scarborough laughed at the finding as “fantastic.”

Stein then pointed to a “frustration that people have here is that the media really did obsess over the Clinton story in 2016” and wondered if “the same people who thought it was such a big story then consider it such a big story now.” Harwood insisted that they wouldn’t. Well, turns out, MSNBC wasn’t as keen on the Hillary story as they were with Ivanka!

Of course, Ivanka didn’t set up her own e-mail server and have an IT company oversee it. It’s not any less of a bad headline or storyline for the White House. 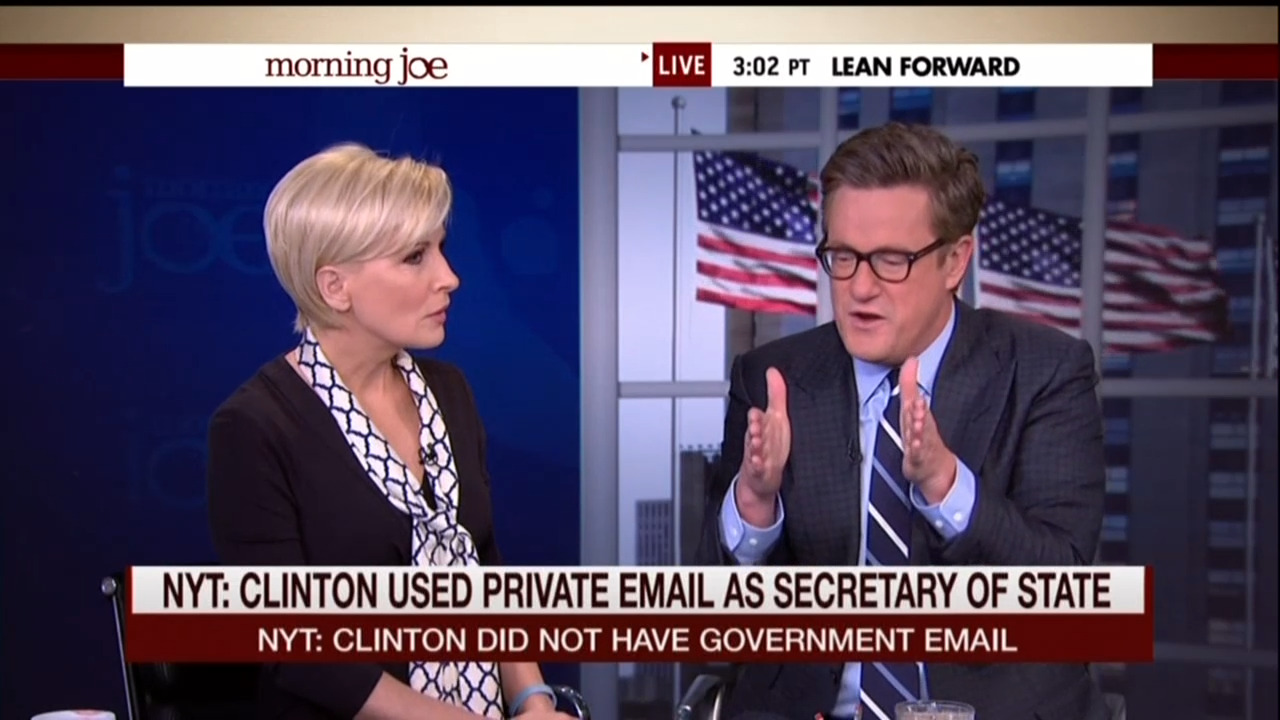 Going back to 2015, our Mark Finkelstein wrote at the time that the show’s cast of characters were lambasted on Twitter for their condemnations of Clinton and the seriousness with which they were treating the story. Brzezinski complained that she felt a “massive onslaught” of “hatred” on Twitter from Clinton supporters.

She felt it was so bad that she wondered if New York Times reporter Michael Schmidt had been stricken with a “fear of retribution or something” following his appearance seeing as how he wrote the initial Clinton story.

Luckily for Schmidt, things panned out well for him as he’s remained with The Times while adding an MSNBC contributor gig.

The reality is, of course, that using a private e-mail of any kind to conduct official government business is not exactly the most stellar move you could make and especially if you’re someone close to the President whose 2016 campaign was successful due to, in part, a distrust of Hillary.

But like most Trump stories, the press always finds a way to show its hypocrisy.