‘Hardball’: Trump Wants ‘White’ Fans to ‘Hate’ NFL Players, Only ‘Morons’ Back Him on the Anthem

Doing their part to drive another wedge into the polarizing NFL debate over national anthem protests, MSNBC’s Hardball host Chris Matthews proclaimed on Tuesday night that President Trump’s strategy is to make “white guys” attending NFL games “hate” the predominantly African-American players while a panelist deemed Trump supporters on the kneeling debate to be “morons.”

Matthews was teeing up comments from Philly Voice’s Jimmy Kempski when he observed what’s so great about sports is situations where one might “see a South Philly Italian guy with an Allen Iverson jersey” and people who “go to different churches...but Sunday afternoon we get along.”

The liberal pundit continued to dither away, but he concluded with an argument similar to one he made on May 31 about Fox News viewers except it was “white guys” watching NFL games:

Trump has found the one area we all sort of agree on...and he says let's fight. He knows what he’s doing. He wants white guys in — in jobbers on cold days with their feds — their faces all red and some, you know, Vikings game or Green Bay game, they want them to hate the players. This is what he wants, Trump. [TO KEMPSKI] Am I wrong or right? I think I'm right. You're thinking you’re the expert.

Kempski agreed with this race-baiting claim, but appropriately noted that the issue had started to fade away with millions pledged for various player-backed causes in addition to the new anthem police, but the President decided to resurrect this issue.

Matthews then asserted that Trump “thinks he’s got the white fans” and wanted to know if Kempski agreed. Instead, The Nation’s Dave Zirin replied that “white fans are polarized” while Kempski almost simultaneously claimed that “he’s got morons is what he has.”

How classy. Supporters of standing for the Star-Spangled Banner are “morons?” And this came from the same person who lamented seconds earlier that the President will continue to spend a lot of his time “divid[ing] people.”

Speaking of eye-rolling statements, Zirin told Matthews that Tuesday should be a day not to celebrate the Eagles winning the Super Bowl.

Instead, it would be because they’re the wokest “team that we’ve seen in sports in some time, completely independently of Donald Trump and what they were going to do today was actually going to make history” if they could have gone to the White House.

As a footnote later in the segment, it was quite ironic that former NFL player Donté Stallworth called out the President’s repugnant birtherism beliefs about Barack Obama while Stallworth himself was a rabid conspiracy theorist as, for many years, he was a 9/11 truther.

To see the relevant transcript from MSNBC’s Hardball on June 5, click “expand.” 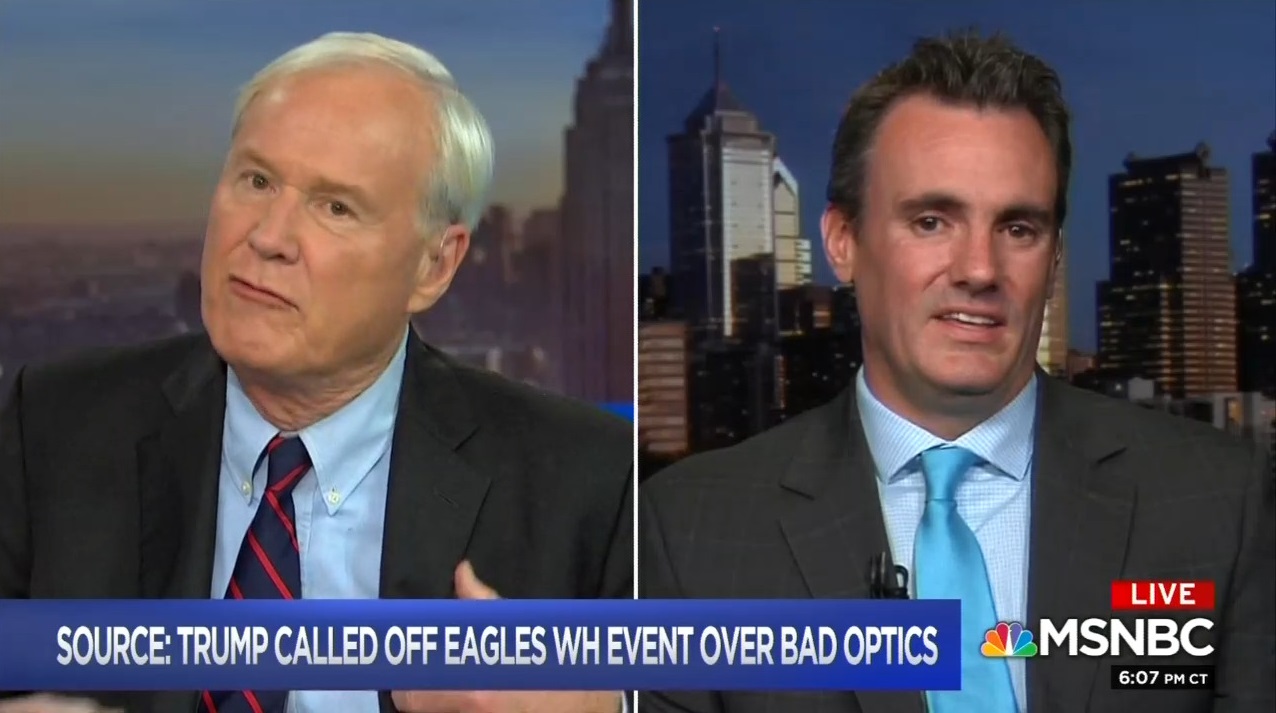 CHRIS MATTHEWS: Jimmy, I want to talk about Philly, first of all, because I grew up there. I haven’t been there in awhile, but I've been to some games lately and I have to tell you, you know, there's nothing more inspiring in an American way to see a South Philly Italian guy with an Allen Iverson jersey on because you just say, normally day-to-day, they may not get along too, as well but in football time or basketball night, they do get along. They root for the same teams, they root for the players, the running backs, the quarterbacks together. It's unity. Sunday morning is not a time of unity in this country. We go to different churches, unfortunately, but Sunday afternoon we get along and it's true in Washington, D.C. and the Redskins I see guys who are African-Americans get completely into the game with red makeup, the whole routine, the Indian music, everything. I got to tell ya. It's a united thing. It’s a united thing and Trump has found the one area we all sort of agree on, cab drivers and drivers, people that don't normally like each other block-to-block, agree on sports and he says let's fight. He knows what he’s doing. He wants white guys in — in jobbers on cold days with their feds — their faces all red and some, you know, Vikings game or Green Bay game, they want them to hate the players. This is what he wants, Trump. Am I wrong or right? I think I'm right. You're thinking you’re the expert.

JIMMY KEMPSKI: I agree. I covered the parade that they had after the Super Bowl. There were 3 million plus people, I think, that attended that and it was all backgrounds, all kinds of races and, Donald Trump in my view has — couldn't care less about the national anthem. I mean —

KEMPSKI: — this — this whole situation was kind of wrapping itself up. The NFL had you know, put out over $80 million over the next seven years, that would go toward the — the education of, you know, police and the community and how they can better work together. These are things that Malcolm Jenkins, who raised his fist during the national anthem during — before Eagles games, that was a big thing he advocated for. So there was progress being made, and really there was no need for any [INAUDIBLE] whatsoever from Donald Trump to kind of bully the owners into putting out a new policy in which the NFL can fine teams for players kneeling during the anthem and then, in turn, the teams can fine the players. There's no need for that whatsoever. It was an issue that was going away, but he doesn't want it to go away because, again, this is something that it's something that his base has, you know, has kind of embraced, unfortunately and it's something you're going to see him continue to try to, like you said, divide people. 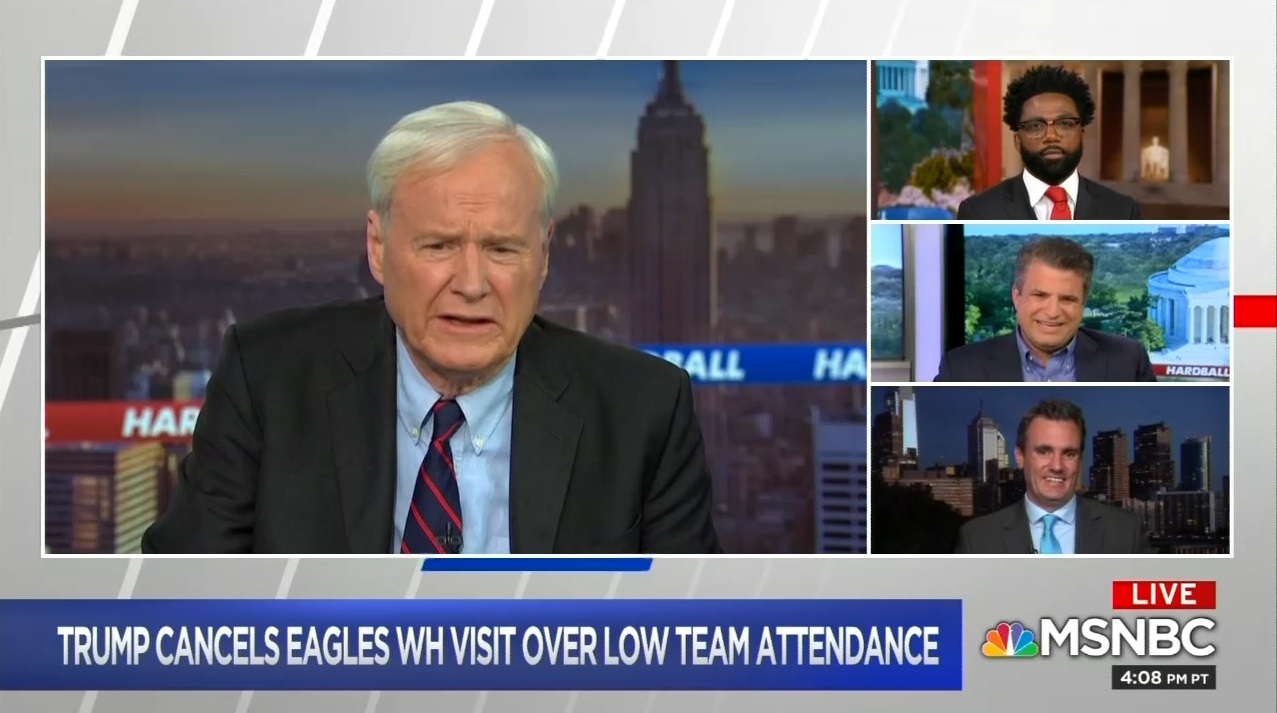 MATTHEWS: He thinks he's got the white fans. Does he with this? Does he got ‘em?

DAVE ZIRIN: No, it’s the white fans are polarized.

KEMPSKI: He’s got morons is what he has.

MATTHEWS: He’s got morons. Thank you. Let me go to David on this. David, I haven't spoken to you.

MATTTHEWS: What do you make of Trump's play to divide? I think he knows he would rather talk about your side or my side ethnically —

DAVE ZIRIN: Yeah, well, first of all, today is a day to celebrate the Eagles not because they won the Super Bowl but because this is the most socially conscious team that we've seen in sports in some time, completely independently of Donald Trump and what they were going to do today was actually going to make history. You know, sports teams have been going to the White House since the Johnson administration, not Lyndon Johnson, Andrew Johnson. It goes back to 1865. And yet, you have never seen a team, on political grounds, you know, 75 percent of the team it was looking like saying they weren't going to show up and they were clear about their reasons and these are reasons that Donald Trump does not want to confront. He doesn't want to have the discussion about the reasons they're putting forward. They're talking about Donald Trump's racism, what Donté referred to with Charlottesville. They talk about his sexism as Tory Smith has. They talk about immigration, they talk about criminal justice. These are the discussions they want to have and Donald Trump won't talk about those issues unless its to fan their flames, so what he does is he diverts the discussion, he diverts, he demonizes and he fills the rhetoric with deceit. 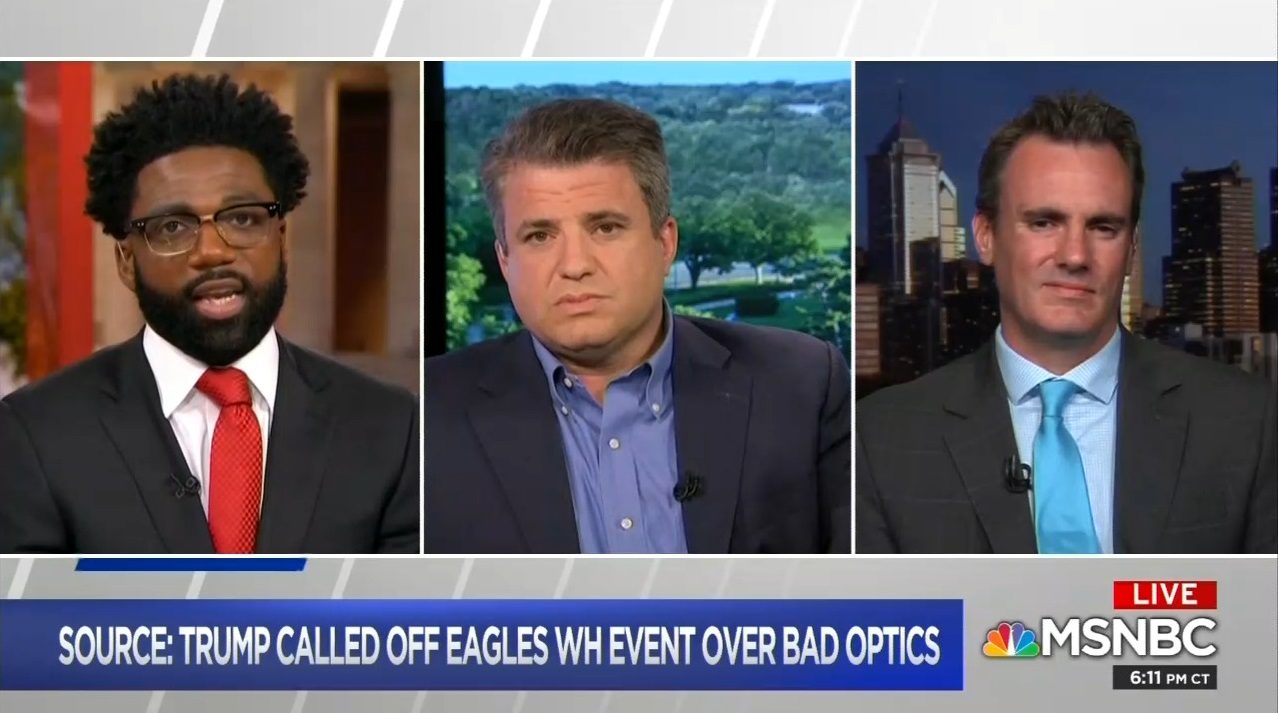 MATTHEWS: The first African-American President, according to Donald Trump for a couple of years, was an illegal immigrant, Donté. That’s how he portrayed him. Then he starred saying well, he learned his anti-colonialist, British attitudes from his father who he had never really met. I mean, the lies that Trump told about Barack Obama, the first African-American President, to me, is his original sin and I don't have any problem with somebody remembers it [sic] and I think the players remember it. Your thoughts? What is it about the general attitude towards Trump that inspired players to say I'm not going down for the photo op?

STALLWORTH: Yeah, I think you hit it — you hit it perfectly and the players have known this you know, if not before he started his campaign with that type of rhetoric with the whole birther issue up until his campaign and the number of things Dave mentioned, the immigration, misogyny, the racism, the dog whistling, it's been happening for a very long time. You know, last season and the season before that. Obviously it's continuing now and up till today.