#Nutso: Check Out This Far-Left CNN Article on MLK’s Socialism; Compares Him to a Phone App 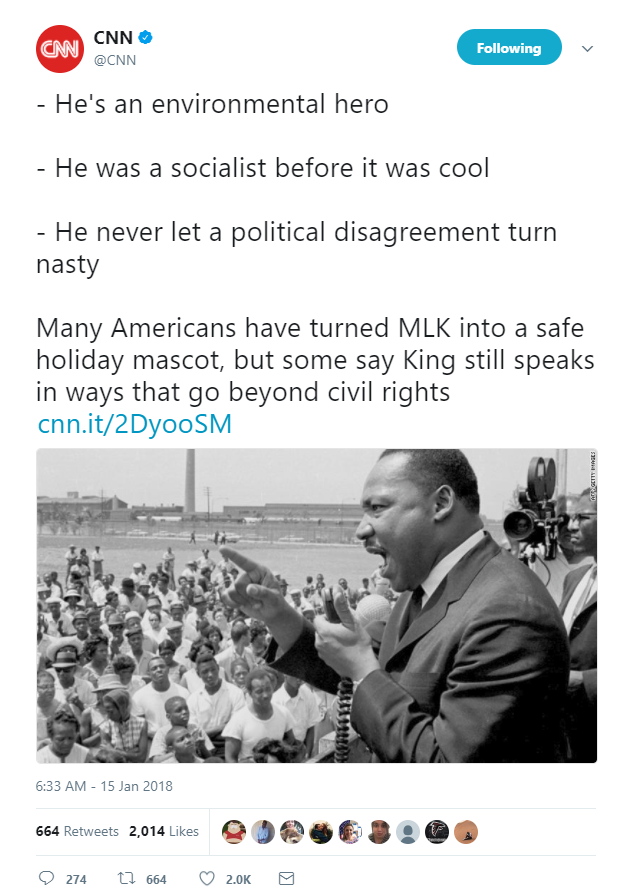 To mark Martin Luther King, Jr. Day, CNN.com uncorked a stunningly crazy piece by CNN enterprise writer John Blake about modern day lessons from King such as his supposed status as “an environmental hero” and the need to embrace socialism since “[h]e was a socialist before it was cool.”

Blake also inadvertently maimed King by comparing him to a smartphone app whose “legacy has to be updated to remain relevant.” So, things like equality, non-violence, and sharing Jesus Christ’s forgiveness need updating? Give me a break.

Before setting up the first of three points, Blake boiled down one of the country’s most revered figures to a cellphone app:

If you're concerned about inequality, health care, climate change or even the nastiness of our political disagreements, then King has plenty to say to you. To see that version of King, though, we have to dust off the cliches and look at him anew.

If you're more familiar with your smartphone than your history, try this: Think of King not just as a civil rights hero, but also as an app -- his legacy has to be updated to remain relevant.

Here are three ways we can update our MLK app to see how he spoke not only to his time, but to our time as well:

The first point was on environmentalism and plucked various quotes that argued Dr. King put the country on the path toward a new awareness of our ecology. But King’s prominence came years after the 1962 publication of Silent Spring by Rachel Carson, which is attributed by many (lefties) to have been the nexus of environmentalism.

Blake foolishly never seemed to point out that King viewed nature as part of God’s marvelous beauty created by Him. Blake would dig into King’s Christian faith in his third (and more sensible) point about disagreements and reconciliation, but he missed the mark here.

The second point was simply laughable, which was that “[h]e was a socialist before it was cool” and how that ugly ideology is no longer “a slur” thanks to “many younger Americans...developing a distrust of capitalism.”

Blake touted King quotes about the need for “redistribution of wealth” and supposed useless of capitalism, but Blake offered no counterargument that socialism and its sister ideology communism are responsible the deaths of millions of people.

Someone informed Blake that he shouldn’t be celebrating socialism considering the situation in Venezuela, but Blake replied by arguing that the troubles there have nothing to do with socialism one bit: 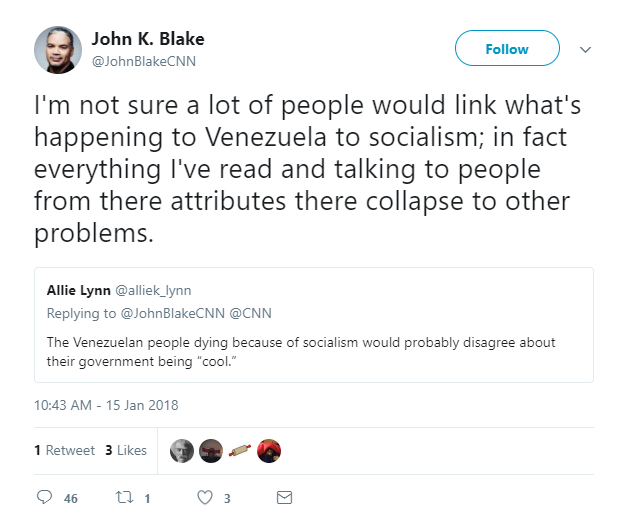 To his credit, there’s much more to agree with on the third point regarding his reaction to the more radical and arguably violent rhetoric from Malcolm X and Blake finally emphasized his faith, but the first two (and the app comparison) are so far divorced from reality it’s perfect for CNN and its Twitter account.