'When they go low, we go lower' must have been the mantra for Friday’s Hardball as host Chris Matthews and his opening set of guests denounced Republicans as “North Korean infantry men” led by “racist” President Trump, “sniveling and supine” Ben Carson, “decorative” African-Americans, and “pathetic” House Speaker Paul Ryan.

AM Joy host and far-left bloviator Joy Reid made it clear what kind of opening segment this would be, ranting about how “repulsed” she was with Republican Senator Lindsey Graham (S.C.) for not seeking out every possible camera and denounce Trump’s “racist commentary” like Democratic Senator Dick Durbin (Ill.) did.

The liberal host complimented Carson as “a good guy,” but faux Republican Washington Post columnist Jennifer Rubin dismissed him because he won’t quit his job (and presumably join the Resistance).

Out of the blue, Matthews regurgitated an insult about Republicans exhibiting “lemming behavior” and “marching in line” behind Trump “like North Korean infantrymen.”

Reid drove MSNBC’s discourse into the ditch as she spewed hateful venom against African-Americans backing Trump:

I agree with Jennifer, Ben Carson absolutely does not need to be there. He has a career and a reputation that was separate and distinct from Donald Trump. Donald Trump disparaged him during the campaign and now he's as sniveling and supine as the rest of them and all of those African-Americans, Trump's sort of black friends assembled around him...all of these people, they obviously are just grubbing for position...None of them have any credibly with the black community.

This was too much for Matthews as he gently stepped in and expressed reservations, but Reid went even further by demeaning their humanities and dubbed them “decorative” items.

House Speaker Paul Ryan didn’t escape ridicule with Rubin lambasting him as being “pathetic,” lamenting “how far he has fallen” and decried his denouncement of Trump’s “s***hole countries” comment as “outrageous.”

Matthews then attacked him as a “not very personal” human being who only cares about his “Ayn Rand, objectivist goals” and “doesn't care about these moral questions or these issues of how we should talk as American.”

Ryan believes in the sanctities of life and traditional marriage while Matthews and Reid don’t, but sure, tell me how Paul Ryan doesn’t have any morality.

Reid replied that “[t]here has never been a more single-minded politician than Paul Ryan” because the “pathetic” Speaker “cares only about eviscerating the social safety net, repealing the 20th century, all of the New Deal, the Great Society, he wants that gone.”

Before Matthews wrapped things up, Reid told him that the GOP will always “fall in line” since, “[a]s you said, they’re the North Korean army marching behind the Dear Leader.”

Amidst all these insults and every segment after that, Matthews refused to offer an on-air apology for asking his staff for a “Bill Cosby pill” as water was being poured for Hillary Clinton prior to an interview on January 5, 2016. With that in mind, who’s the real wimp, Chris?

Here’s the relevant transcript from MSNBC’s Hardball on January 12: 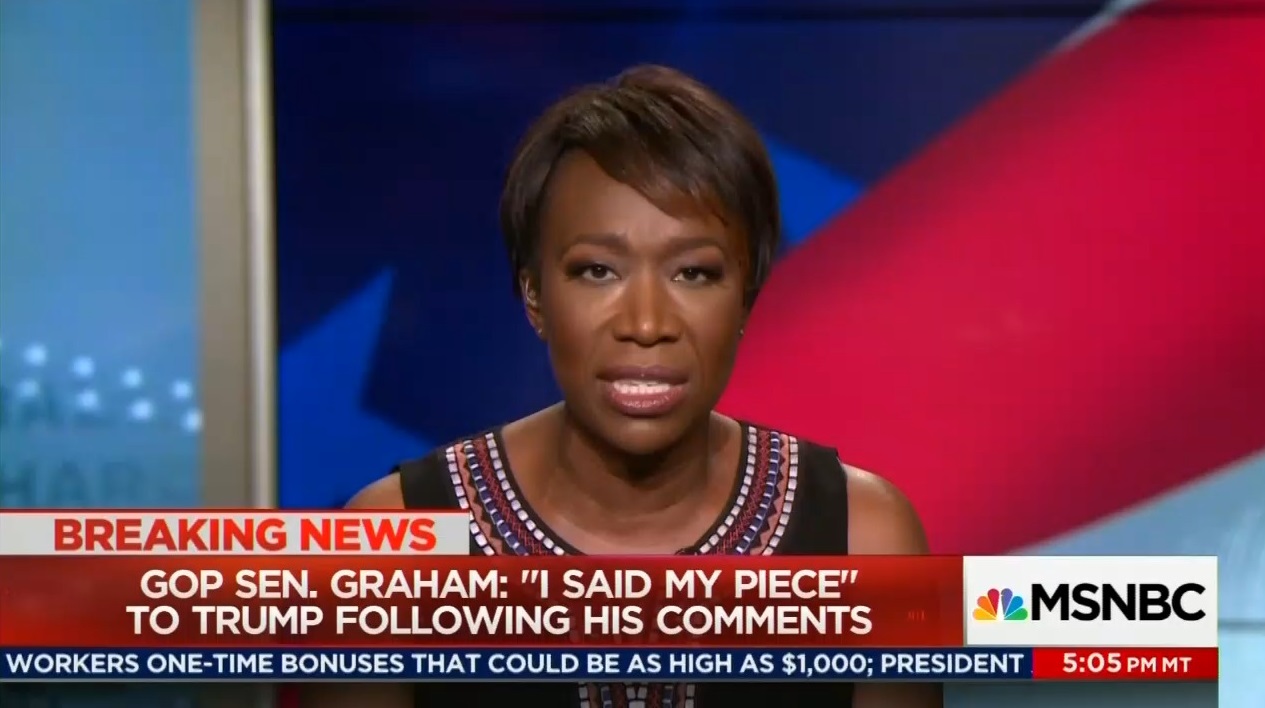 JOY REID: As a child of immigrants myself, I was disgusted by his comments but I think, Chris, I'm even more repulsed by people like Lindsey Graham who don’t have the guts to come out and condemn Trump publically. How — how shameful for those men to sit around that table, listening to this racist commentary and they don't have the courage to walk out to a camera and do what Dick Durbin did. Shame on them. Shame on Lindsey Graham just telling Tim Scott. Tell us what you told him.    Shame on him.

CHRIS MATTHEWS: How would you like to be Ben Carson in standing there? Ben Carson — whatever you think of his politics, I think he's a good guy. But he has to play the part as an African-American cabinet member.

JENNIFER RUBIN: Actually, he doesn't. He can leave and that's what bothers me as well. Not a single person —

RUBIN: — yeah. Not a single person in the White House staff, not a single person who works for one of those Senators who doesn’t remember walks out the door and says no, this is a bridge too far. What is the matter with these people?

MATTHEWS: Well, one reason is there's a lemming behavior by all Republicans that we’ve all noted here that goes beyond any of these moral questions. They seem to be marching in line like North Korean infantry men. They just do. You know, let's get back to that, Joy, why do Republicans say yes, sir every time Trump says do this? Every time —

MATTHEWS: — the tax bill, everything.

REID: Yeah, no, and it’s interesting because, you know, there are different ways to look at it, I agree with Jennifer, Ben Carson absolutely does not need to be there. He has a career and a reputation that was separate and distinct from Donald Trump. Donald Trump disparaged him during the campaign and now he's as sniveling and supine as the rest of them and all of those African-Americans, Trump's sort of black friends assembled around him, Darryl Scott answering on his behalf, Katrina Pierson, all of these people, they obviously are just grubbing for position and looking for something for themselves. None of them have any credibly with the black community.

REID: Set them aside.

MATTHEWS: You don't know their motive.

MATTHEWS: Well, you just know that —

MATTHEWS: — you call them on the Republican side —

MATTHEWS: They call them the worst kind of good soldiers. Well, and anyway — 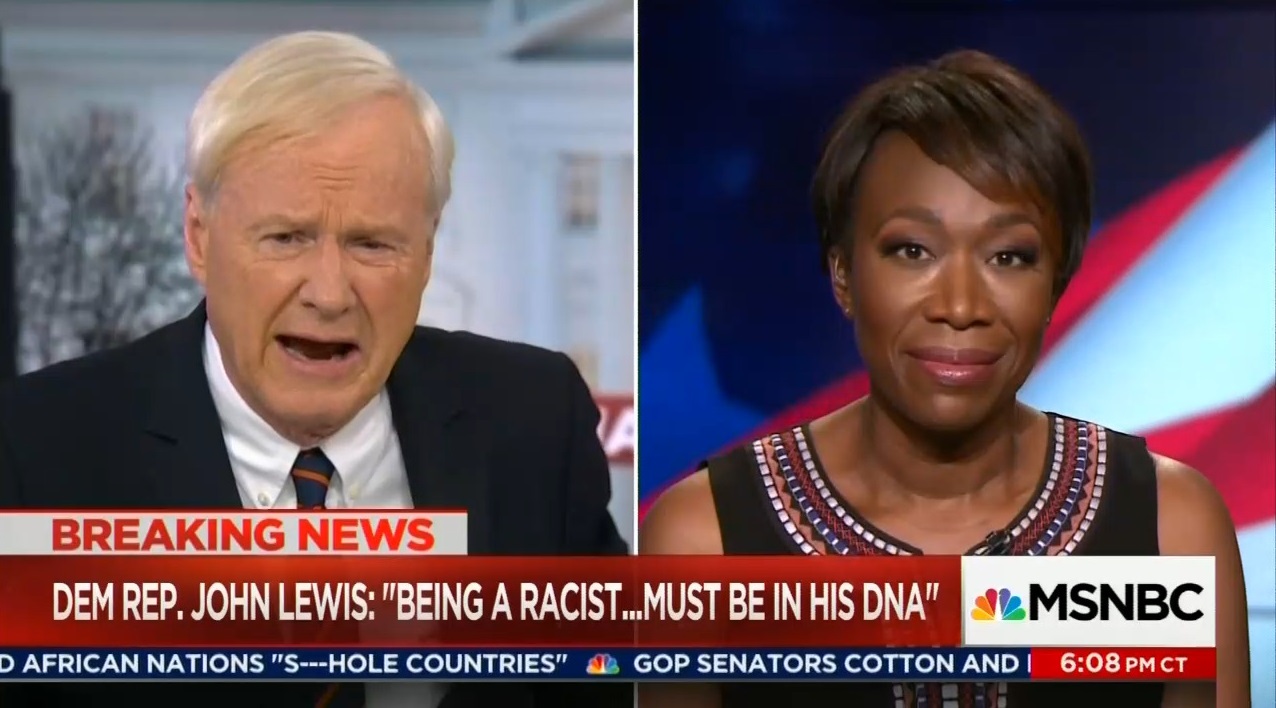 MATTHEWS: Let me go to Joy on this. I think everything Paul Ryan hears or thinks about has to do with his agenda. He’s not very personal. It's all about this sort of Ayn Rand, objectivist goals he has.

MATTHEWS: You know, that's his goal in life and anything that advances that is fortunate.

MATTHEWS: And anything that doesn't is unfortunate.

MATTHEWS: He doesn't care about these moral questions or these issues of how we should talk as American.

REID: I agree with you. There has never been a more single-minded politician than Paul Ryan. He cares only about eviscerating the social safety net, repealing the 20th century, all of the New Deal, the Great Society, he wants that gone and it is true. He is pathetic. I think it's one of the darkest, sort of chapters in the Trump era is there Paul Ryan revealing himself. 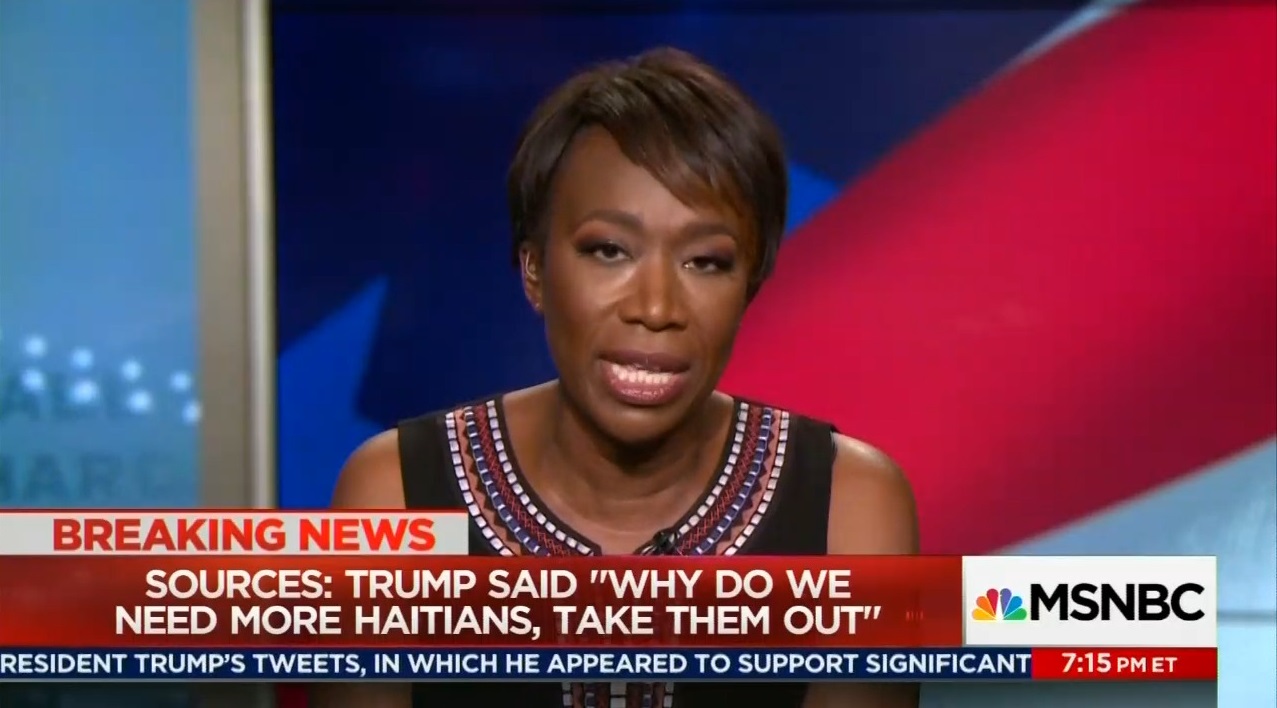 REID: So, the question is whether or not there can be good faith negotiations with such a person, with Stephen Miller still whispering in his ear and still, you know, with the Attorney General whispering in his ear and I think Democrats need to make a gut check, is it worth siting around that table with this man, given that he has now put his racist views on the table.

REID: Yeah, they will. The Republicans will fall in line. As you said, they’re the North Korean army marching behind the Dear Leader.

MATTHEWS: Every time I see those pictures of that —

MATTHEWS: — uniformity and regimentation, I think of the Republican caucus in the Senate.