On Tuesday afternoon, MSNBC Live host Katy Tur reinforced the notion held by some (here, here, and here) that, quite simply, she’s not ready for primetime when it comes to being a substantive host. The latest example came when her far-left economic views ran into a buzzsaw against Republican Congressman and former economics professor Dave Brat.

The interview lasted over ten and a half minutes and was hostile from the get go. After Tur stated that Brat has praised tax reform, she complained that “37 of 38 experts surveyed by the University of Chicago's Initiative on Global Markets said the GOP tax bill would cause the U.S. debt to substantially increase much faster than the economy.”

Brat went right to work, schooling Tur on how that survery only looked at “the effect of the narrow tax bill on revenues and on the deficit” instead of considering the current rate of economic growth (and thus revenue) as a result of the bill.

Tur made a factual error when she claimed that the non-partisan Tax Foundation is “conservative” to bemoan their analyses about the deficit, but Brat rolled with the punches and invoked the liberal media’s pronouncements that the economy would crash if Donald Trump were elected:

But the mainstream media a year ago said if President Trump wins the stock market would fall through the basement. It’s exactly — everybody had it wrong, right? The press had it all wrong. Everyone said, oh, the economy is going to tank. The stock is going to — it is through the roof. It’s 70 all-time highs. 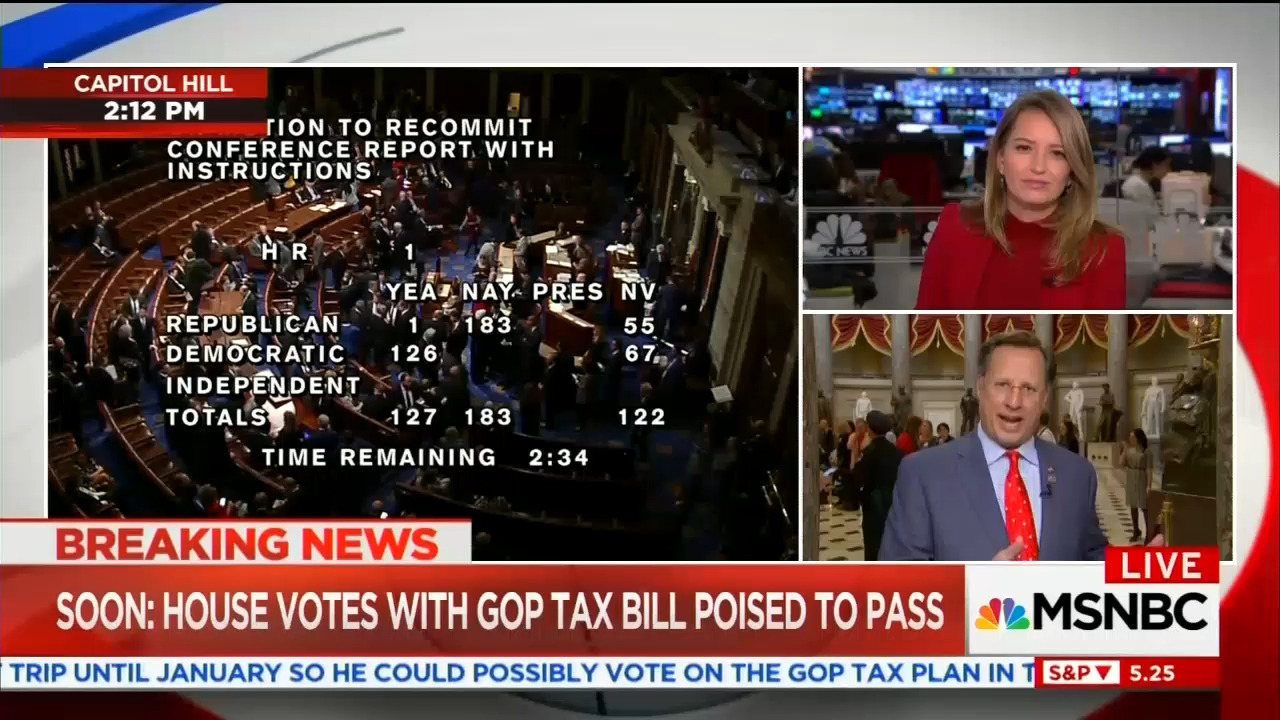 The smug factor went way up as Tur proclaimed to Brat that “it feels like you are relying on this tax cut of the corporations, of the wealthy to trickle down.” When Brat mentioned that “[w]e were all poor until 1776” and capitalism began to flourish, Tur followed up with a chain reaction of befuddling questions for the ages:

TUR: Why do you need economic growth at the corporations? Why is this a tax cut that’s going to corporations? Corporations are sitting on record profits —

TUR: — record — record cash stocks. So, why give this to the corporations and not to the average American citizen?

BRAT: Well, because it's better to give tax cuts to corporations than it is to dictators and pharaohs and the head of federal government, right? That's what causes economic growth. Everybody works —

TUR: I'm not talking about dictators or pharaohs or the head of governments.

BRAT: Right, well, we are giving a tax cut to every bracket to the middle class. A single mom at home will get over $1,000 back. The 70,000 family with two kids married will get $2,950. $2,950. So, we’re giving them stuff too but the growth piece is by far the most important. Wages have been flat for 30 years. Bernie brought that up, right? Bernie won that. He was winning on that. Trump came in, ran on the middle class. Wages have been stagnant, flat for about 30 years. They need relief. We haven't had proposals from the other side to how you increase productivity. That’s the only —

TUR: Why do you believe the tax cuts for wealthy and corporations are going to help the economy? There is no evidence that that’s actually worked in the past.

BRAT: Yeah, well, there — all the evidence from every Nobel Laureate. I did my Ph.D. in economic growth on the solo model —

TUR: I know. You told me a lot of this in the past.

BRAT: If you read that literature, the biggest contributor to economic growth is capital. There’s no debate. The second is probably human capital. The third is technological growth. It’s hard to measure that. Those are the three determinants of economic growth in — in our country's history, right? So, if you want the economy to grow, you’ve got to invest in capital, human capital, technology and you’ve to be positive about business. Everybody works for either a small business or corporation, right? And so that's what feeds and pays for government. If that's not growing, like in Virginia, our economy only grew at 0.6 last time. How do you fund government jobs when the Virginia economy is only growing at 0.6?

That’s all real. Katy Tur, author, NBC News Trump campaign correspondent, MSNBC host extraordinaire, wondering why there needs to be economic growth in order for businesses to succeed. That’s what you get for someone who grew up in a family of journalists.

Tur thought she had Brat trapped when she played a clip from a Wall Street Journal event in which few major CEOs raised their hands when asked about the chances of their companies increasing their investments if tax reform passed.

However, Brat was ready. He responded by noting that the small audience wouldn’t have been statistically valid to render any judgement:

You just did a random sample of in less than 30. Statistics require at least 30 data points to do any kind of science and then if you control for other variables, you need more. So, you just did a nice little sample of a few people. That don’t tell you anything. The entire economic literature over the past 50 years since Solo wrote his piece and then Mancu — I did my piece on Mancu at Harvard and it all shows, on average, if you give corporations an incentive to invest in capital, they do so, right? Billionaires can only have so many boats and houses and whatever. The rest goes into the stock of the company and then they reinvest.

Tur continued channeling Bernie Sanders by bemoaning how he’s “trusting that these corporations, which are already sitting on a ton of cash — over a trillion dollars in cash, that by giving them more money, they're suddenly going to start saying, hey, I want to give this to my worker.”

The Virginia conservative responded that corporations have refused to be big spenders in the years because “you have to be irrational not to invest that and make more unless the current environment is no good and for the last eight years, we just had regulation on regulation so the cash didn't go into the economy.”

That’s what has to happen. Now the cash is going into the economy. The Federal Reserve is the best evidence of this. They’re raising interest rates for the first time, right. A quarter, a quarter, a quarter. That tells you, for the first time in the last eight years, they wouldn't do that. Now they’re raising rates. That tells you they have confidence in the underlying economy as well as the stock market. They think that it’s robust enough to raise interest rates and so, that shows you businesses will start to put all that cash sitting on the sidelines at rest. That’s a terrible thing.  I agree with you. We want that invested in the economy in the capital equipment to give workers wage rates. That’s what — if the average worker, right, just look at General Motors or the assembly line, Henry Ford, you put capital in the hands of your workers, Americans do great things and that’s what we want to do.

The MSNBC host kept ranting about “the top 0.1 percent” when she switched gears to dismissing Brat’s passion for this subject and desire for the country’s quality of life by wondering if he’s only supporting tax reform to please his donors. What a cheap shot.

In part, Brat replied: “If you're familiar with my election, that question is kind of humorous, but let me go back to the economics. Supply and demand. The demand side is the people. We’re going to give them the money.”

The match ended on a bizarre note when Tur pressed Brat to reveal how much money he makes and what tax bracket he would be placed under the new plan. Brat disclosed that he would be taxed at the 24 percent rate, adding that “the first $24,000 in income is not taxed for anybody” and hence why, despite the media’s insistence, some middle and low-income earners can’t receive a tax cut. 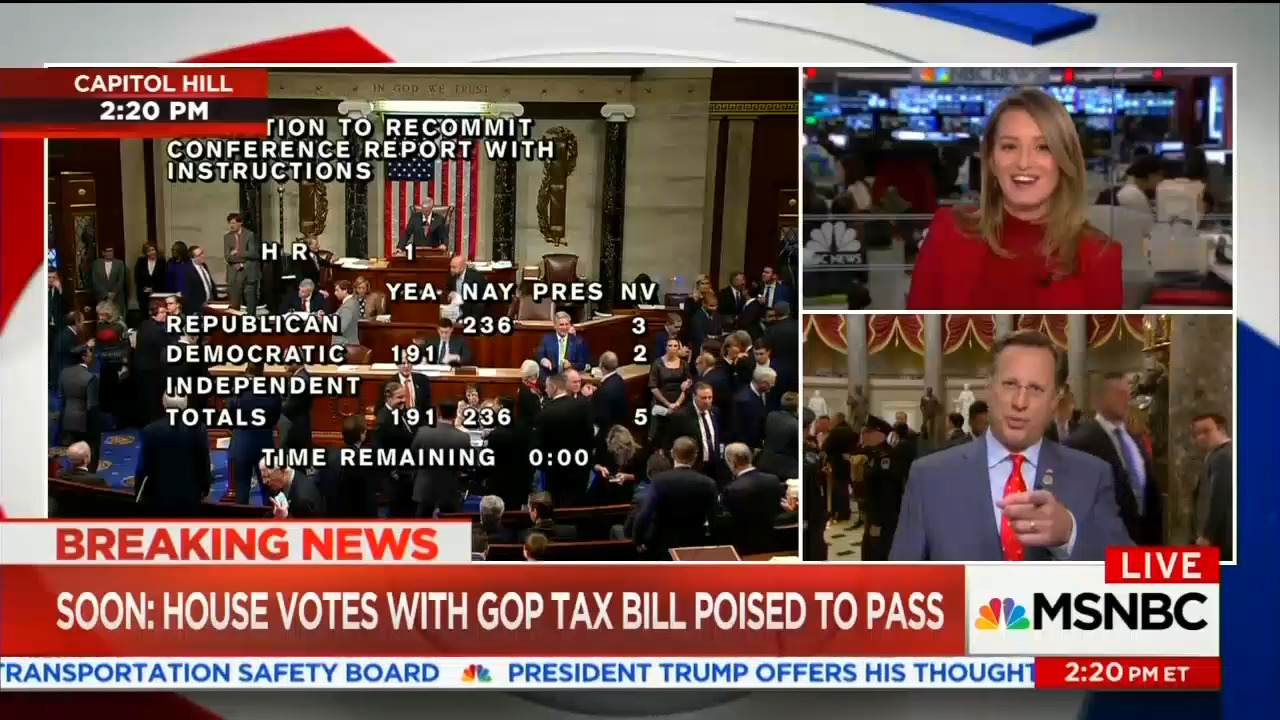 Brat turned the tables on Tur as she attempted to usher him away, asking her how much she made. Allegedly, Tur couldn’t remember:

TUR: — or selling it to the American people like you are.

BRAT: Well, check out what you’re making too, so it’s fair and balanced.