Why People Hate the Media: Journalists Lash Out at Sanders Asking What They’re Thankful For

On Monday afternoon, some journalists provided another small nail in the coffin of the media’s credibility when they lost their collective minds on Twitter over White House Press Secretary Sarah Huckabee Sanders asking reporters to share what they’re most thankful for this Thanksgiving week.

Sanders still allowed reporters to ask questions and most responded with thoughtful answers, but a few ignored it (including the Associated Press’s Zeke Miller and Washington Post’s Jenna Johnson). For some journalists on Twitter, they lambasted Sanders for her “bizarre” exercise that one labeled “harmful to a democracy.”

NPR’s Domenico Montanaro was the most offended, showcasing how he honestly needs to lighten up and be a normal human being. In a series of tweets, he argued that the simple request was somehow a threat to the country’s stability: 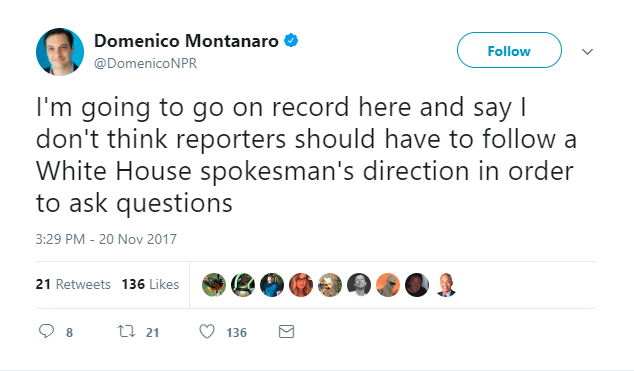 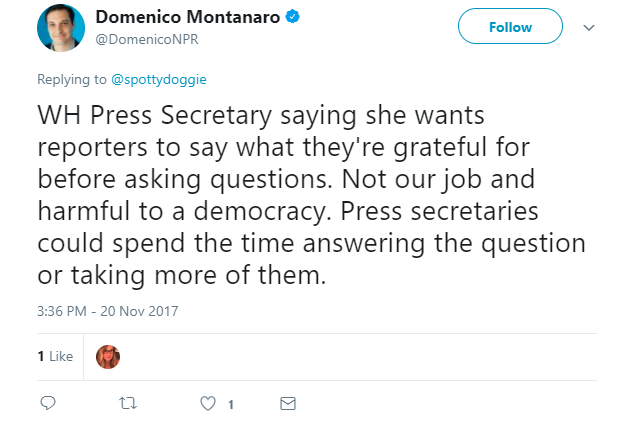 The Daily Beast’s Asawin Suebsaeng was right behind Montanaro in having a meltdown, firing off a series of tweets, starting with how he’s “thankful for not having to go to the briefing room every day” in a subtweet about Sanders. In the next three tweets, he was far more direct:

Freelance journalist Kate Bevan was similarly annoyed, tweeting for Sanders to “fuck off” and “[h]ope the reporters said they were thankful for a free press.” For the record, a number of them did, with Bloomberg’s Margaret Talov and ABC’s Cecilia Vega citing that as their sole answers.

BuzzFeed News editor Hayes Brown was mortified, expressing grief that anyone went along with Sanders’s question: 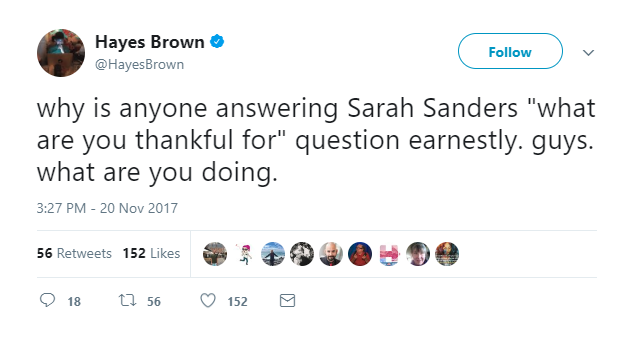 Showing how partisan some in the media are, Politico’s Timothy Noah stated how upset he was that no one in the briefing room responded with “Robert Mueller’s ‘wide-ranging request’ for DOJ documents” in the Russia probe.

Washington Blade White House reporter Chris Johnson disliked it, but was able to convey it without spouting off: 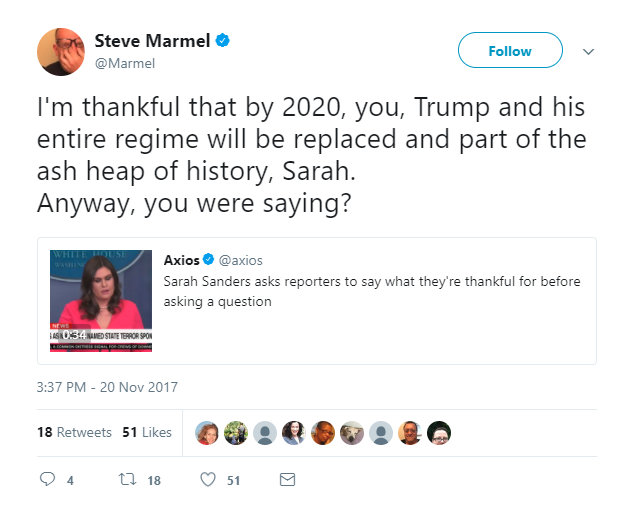 For one tweet of note just outside journalism, Hillary Clinton confidant Philippe Reines tweeted that it was equal to one President Trump cabinet meeting in which his cabinet secretaries showered him with praise to the media’s horror.

Like Reines, a number of tweets complained that Sanders “forced” them to say “what they’re thankful for.” The horror! Thinking positively about the good things we’ve all been blessed by in our lives! Oh no!

Once the briefing was over, Washington Post columnist Josh Rogin proclaimed that he’s “thankful that awkward briefing is over.”