MSNBC’s MTP Daily host Chuck Todd led off Wednesday’s show with an asinine, pants-on-fire assertion that Alabama Republican senatorial candidate Roy Moore “doesn't appear to believe in the Constitution as it's written” because Moore said our rights come from God.

For any non-revisionist individual who’s read the Constitution or commentaries on it, they would know that Todd’s slam against Moore is pure and utter fake news. Why? It’s because the Constitution ensures that our God-given rights aren’t hinged upon by the government.

Todd started by touting the “purge of the GOP establishment” in addition to “[a] crisis of confidence in Mitch McConnell, a weakened President who's now scrubbing his Twitter feed, and the political earthquake in Alabama underneath it all.”

Before outlining other positions held by Moore that could be considered controversial, Todd started by taking a jab at the label “Christian conservative” because that “doesn't even begin to describe” Moore, who “could very well be your next U.S. Senator.”

Now, here’s the falsehood in question: “If you don't understand just how freaked out some folks in the GOP and the White House are about what that means, then you don't know Roy Moore. First off, he doesn't appear to believe in the Constitution as it's written.”

The Meet the Press moderator then played a clip of Moore telling a journalist the following: “Our rights don't come from the government. They don’t come from the Bill of Rights. They come from Almighty God.”

Somehow, this led Todd to reply “that’s just a taste of what are very fundamentalist views that have gotten him removed from office twice as Alabama chief justice.”

The Washington Free Beacon’s Alex Griswold quickly went to town on Todd’s head-scratching claim, noting in one tweet: “That was precisely the view of the Founders. They saw rights as inalienable, natural, God-given, etc., not something given by man.”

“The Constitution doesn't GIVE you rights, it guarantees them. That which is given by the government can be taken away,” Griswold added in another tweet.

The Declaration of Independence contains the clearest, most concise, and most eloquent articulation of the American creed: a political definition of man in two axioms, and three corollary propositions on government.

[T]he founders also laid down the timeless and universal principles that were to define the new country. In that second paragraph, we find the clearest, most concise, and most eloquent articulation of the American creed. The truths proclaimed by the Declaration of Independence define us as a nation and bind us together as Americans. They unite the diverse pluribus into an American unum.

What came next in his August 27, 2013 piece blows away Todd’s claim about Moore on its own [emphasis mine]:

Nearly all of us, at one time or another, refer to our “constitutional right to free speech.” While this common phrase may seem harmless, it points to a larger misunderstanding of where our rights come from — a misunderstanding that undermines many of our most fundamental policy debates.

The fact is, the U.S. Constitution protects our God-given rights from government. The government does not (as the phrase above implies) grant those rights to us as citizens. This is perhaps the most widely misunderstood aspect of our system of government.

He continued later in the column [emphasis mine]:

Were the Constitution the granter of the right to free speech, religion, assembly and so forth, the First Amendment would not start out, “Congress shall make no law.” That part of the sentence clearly states that the government has no rightful authority over those things and is blocked from infringing upon them. This is the concept of negative rights.

A negative right is one that cannot be infringed upon by outside forces. Government is not granting you the right to free speech. That right already exists. Government is expressly forbidden from attempting to infringe on it.

The Declaration of Independence asserts that all men are endowed by their Creator with certain unalienable rights. In other words, our rights to life, liberty and the pursuit of happiness are God-given, not government given.

However, if you think that we are granted our fundamental rights by the government, then you are more likely to seek additional favors from the government. If the government is the grantor of all good things, what is to stop someone from thinking up more good things that could and should be granted by our elected leaders?

Here’s the relevant transcript from MSNBC’s MTP Daily on September 27: 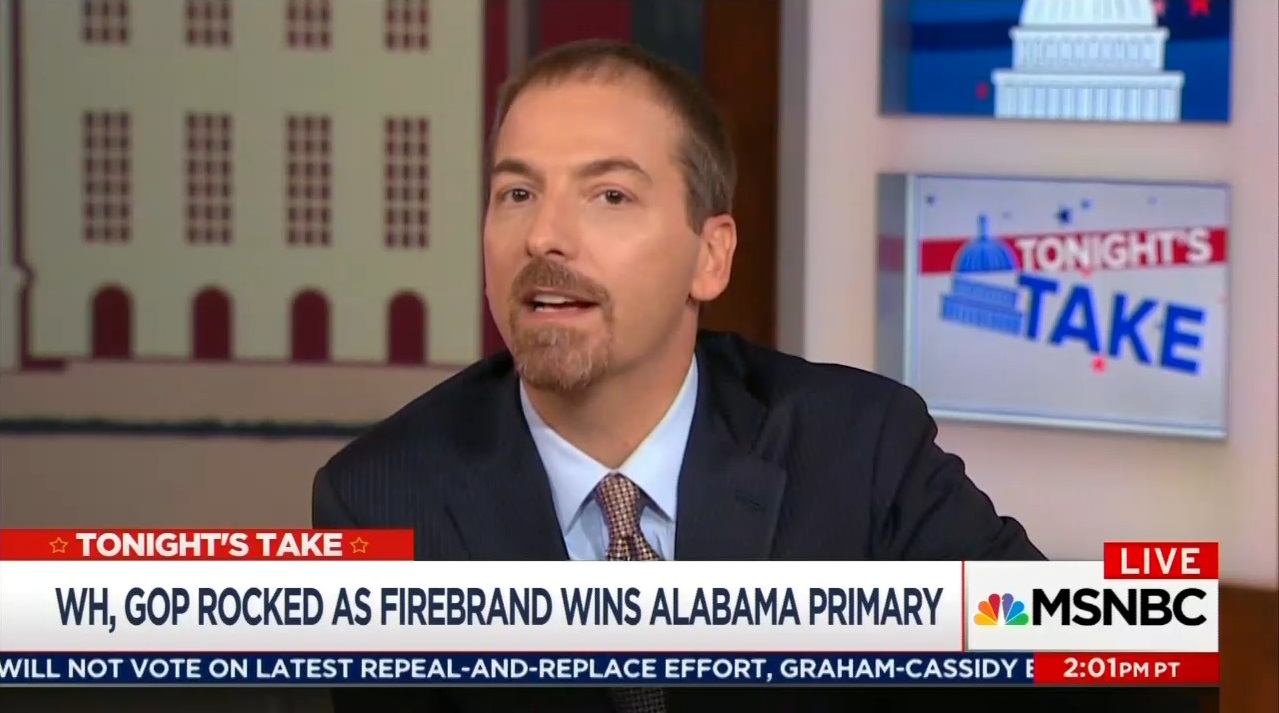 CHUCK TODD: We begin tonight with a purge of the GOP establishment. A crisis of confidence in Mitch McConnell, a weakened President who's now scrubbing his Twitter feed, and the political earthquake in Alabama underneath it all. If you're not familiar with this guy, pull up a chair. Because after knocking off the President, McConnell's preferred establishment candidate in the Alabama runoff by nearly ten points, Roy Moore where the phrase Christian conservative doesn't even begin to describe him, could very well be your next U.S. Senator. If you don't understand just how freaked out some folks in the GOP and the White House are about what that means, then you don't know Roy Moore. First off, he doesn't appear to believe in the Constitution as it's written.

TODD: Now, that's just a taste of what are very fundamentalist views that have gotten him removed from office twice as Alabama chief justice. Once for refuse toll follow a federal court order to remove this 350-pound monuments of the Ten Commandments that he had installed in the state courthouse and once for ordering state judges to ignore the United States Supreme Court's ruling that same-sex marriages are constitutional.