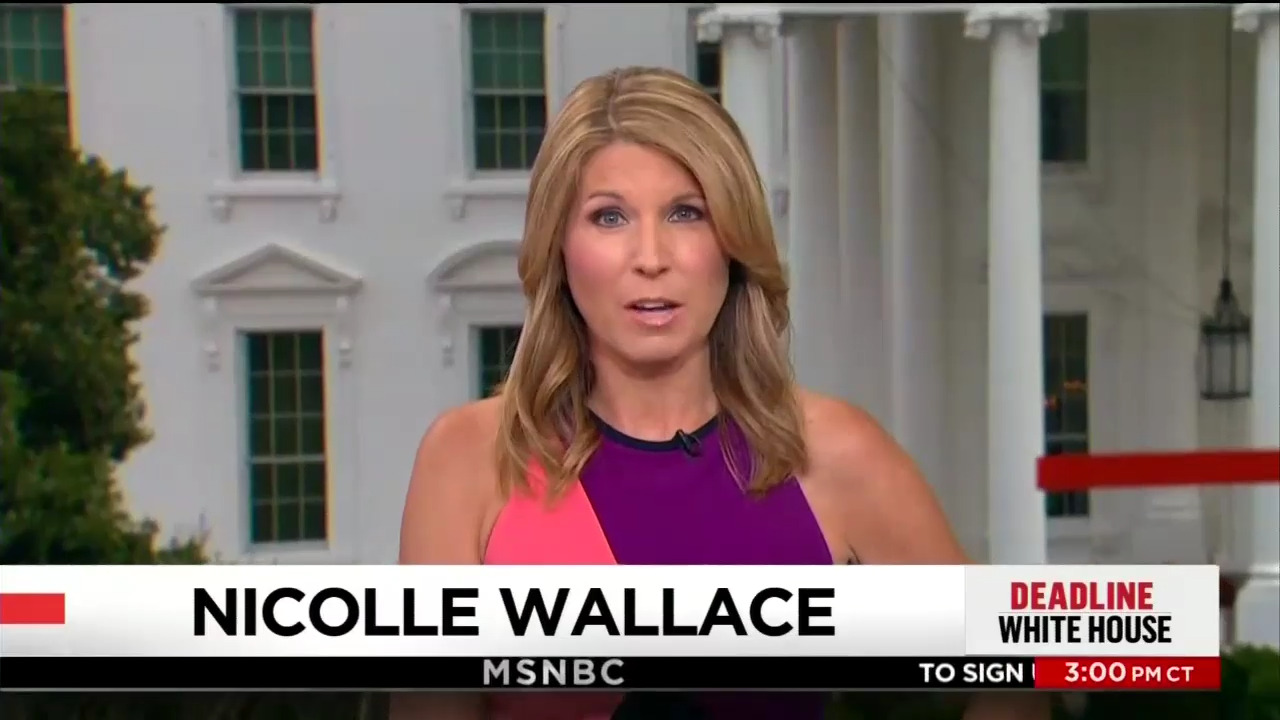 Former Bush administration official, former failed McCain campaign aide, and current MSNBC host Nicolle Wallace was featured in Sunday’s New York Times Magazine in which she promoted her liberal tilt compared to other Republicans and complained that “there’s no other news” besides President Trump.

Contributor Ana Marie Cox’s question on the media was the penultimate one prior to asking about her Trump-voting parents:

What do you think you’d be covering if you didn’t cover Trump? One of the symptoms of the time of Trump is that there’s no other news. I sometimes think: If there were another Arab Spring, how would we cover it? I don’t know. It’s an impossible question to test because you can’t remove Trump and see what we would do without him, but it’s an interesting question.

You’ve talked about how your parents voted for Trump. Have they changed their views of him? We don’t talk about politics anymore.

This is patently absurd. Wallace seemed to not acknowledge the role of agenda-setting, a media theory taught in college classes, ranging from government to communication to journalism.

Quoting from the official definition, agenda-setting doesn’t so much have to do with politicians (read: Trump), but rather the “ability (of the media) to influence the salience of topics on the public agenda.” It goes back to the media’s constant focusing on Trump during the Republican presidential primary and crowding out his opponents.

The media set the agenda and thus we ended up with Trump winning the nomination and presidency. Same goes for when the liberal media refused to cover Hillary Clinton scandals, the IRS scandal, or Debbie Wasserman Schultz’s former IT guy Imran Awan.

Going back to the beginning of the interview, Wallace flaunted her softness as a left-leaning Republican (which has made both McCain colleague Steve Schmidt and herself all the more appealing for MSNBC and NBC News):

You’re a former Republican communications strategist who worked for George W. Bush, John McCain and Sarah Palin, and now you have a show on MSNBC. What’s it like on that side of the table? I was always the ‘‘squishy’’ one on the Bush White House staff. No one I worked for was ever deceived by my degrees of conservative principles, and that was my value to them: I understood the other side. I helped most of the people I worked for soften their polarizing edges. But to say that I would be totally unemployable in today’s political climate is probably an understatement. That’s just not what any of them do.

Cox didn’t even have to bring up Palin as Wallace invoked the former VP candidate while speculating what’s it like working in the Trump White House: “As chaotic and dysfunctional as it looks from the outside, from my experience with Sarah Palin, I know what’s known and discussed publicly is usually just the tip of the iceberg.”

Building off that, Cox asked about Palin if she was “only the tip of the iceberg.” Wallace smugly responded that “what I think was unknown was the degree of her rejection of us asking her to do anything that wasn’t her own idea.”

Hmm, you know what probably wasn’t her idea? Being thrown into a proverbial lava pit with the now-infamous Katie Couric interview.

She then continued [emphasis mine]:

We were dealing with someone who was maybe ahead of her time. Her irreverence and disdain for the establishment of her own party and her embrace of the ‘‘isms’’ — nativism, isolationism, you know — she blew the walls out on the political norms before Donald Trump did. She was obviously onto something. She had crowds five times the size of McCain’s. We think it was all about her political skills, but it was also about her message. She railed against the mainstream media, she attacked all of us, her own advisers. That her audiences were so enthusiastic about that was the early signal that the party had changed.

Excuses, excuses. And these are the same groups of people that trash President Trump whenever he mentions Hillary Clinton.

In terms of sympathy, she won’t receive any from this space or you, the readers. What’s so delicious is the fact that “all of us” in the form of Palin’s “own advisers” are one in the same with “the mainstream media.”

Both groups are in the same income bracket, enjoy a cosmopolitan lifestyle filled with lavish dinner parties (to borrow a word from Stephen Miller), and come venomously dripping with disdain for average Americans.

And if they don’t come complete with disdain, it’s the smug view that they know better and what’s in the best interests of the peons outside Los Angeles, New York, and Washington.

In other words, these guys and gals are the ones who loved what Jim Acosta did in treating a poem at the base of the Statue of Liberty like it’s the law of the land.