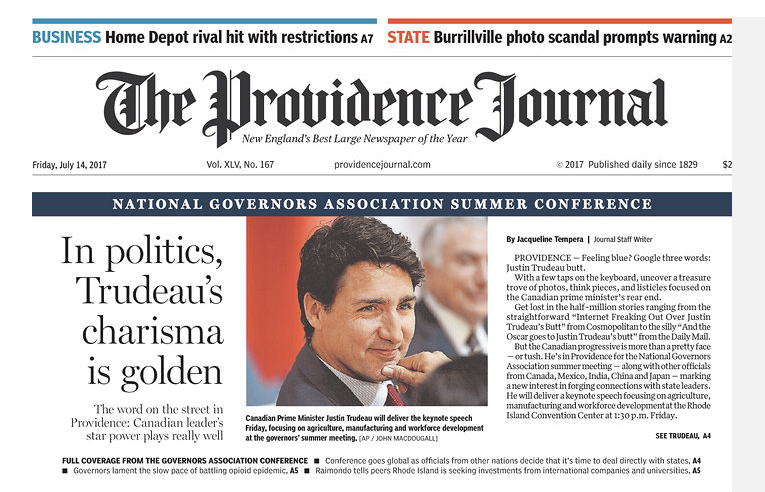 Reporter Jacqueline Tempera eventually got to Trudeau’s adoring fans and leftist background, but she herself seemed to be channeling David Brooks or Eleanor Clift when she spilled this ink:

With a few taps on the keyboard, uncover a treasure trove of photos, think pieces, and listicles focused on the Canadian prime minister’s rear end.

But the Canadian progressive is more than a pretty face — or tush.

I wonder if Tempera was singing I Like Big Butts to herself while she was writing this. In all seriousness, what an embarrassment for journalism. And they wonder why people don’t take the establishment, liberal media seriously anymore. 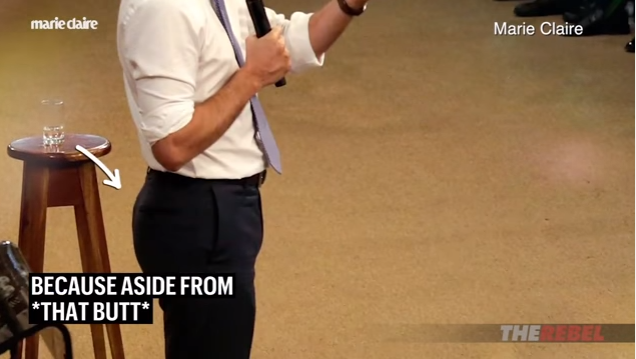 On that note, President Trump complimenting French President Emmanuel Macron’s wife on being in good shape? Tasteless, the media have said. But what about this?

Tempera highlighted Trudeau’s plans at the NGA and gave readers a brief biographical synopsis (including his privileged upbringing as the son of the late former Canadien Prime Minister Pierre Trudeau).

She also interviewed people on the streets of Providence about Trudeau as well as Roger Williams University professor June Speakman. Needless to say, the bar couldn’t be any lower for respondents than Tempera’s ogling [emphasis mine]:

Some, like Anna Lawrie, who was visiting from the United Kingdom said, “He seems nice.” But what she really loves is his politics.

And Olia Yelner, from Connecticut, said she was happy he’d come talk to state leaders in a way she feels President Donald Trump has not.

“He’s like super progressive. He’s young. He’s like the opposite of our president in every single way.”

A few magical political moments have defined Trudeau’s tenure. One: when he greeted Syrian children at the airport with winter coats and said, “You’re safe at home now.”

“That just makes you choke up,” said Speakman. “I get goosebumps. Especially in contrast to President Trump’s approach to refugees.”

She added: “For progressive Americans that is like, ‘Wow — why can’t our president have that kind of a humanitarian approach?’”

Some of the respondents appeared in a video accompanying the online version of the post (including a few who didn’t recognize Trudeau when shown a picture of him). In the video, she suggested that Trudeau is the “Ryan Gosling of politics.”

For as much as the left wants to harangue Trump for his statements towards women, perhaps the media should look at themselves in the mirror too. Back in 1998, then-Time magazine White House correspondent Nina Burleigh exclaimed how she’d “happy to give” Bill Clinton a blow job “just to thank him for keeping abortion legal.”

On July 10, 2001, ABC journalist and then-Good Morning America co-host Diane Sawyer told colleague Charlie Gibson this following a report claiming that Republicans have three times as many nightmares as Democrats: “After pepperoni pizza and banana milkshakes once, I dreamed about Bill Clinton.”

The Obama era arguably provided more examples. Chris Matthews will live in infamy for the “thrill going up” his leg about Obama, but there were others. Brooks expressed infatuation with the crease in Obama’s pants while then-colleague Judith Warner swooned in a February 5, 2009 post that she once “dreamt of Barack Obama.”

“He was taking a shower right when I needed to get into the bathroom to shave my legs....I launched an e-mail inquiry....Many women - not too surprisingly - were dreaming about sex with the President,” she added.

A Washington Post story on Christmas Day 2008 from Eli Saslow included this dozy about Obama exercising:

Between workouts during his Hawaii vacation this week, he was photographed looking like the paradigm of a new kind of presidential fitness, one geared less toward preventing heart attacks than winning swimsuit competitions. The sun glinted off chiseled pectorals sculpted during four weightlifting sessions each week, and a body toned by regular treadmill runs and basketball games.

Needless to say, Tempera will live forever alongside these shameless journalists with her own personal source of temptation: Trudeau’s rear end.