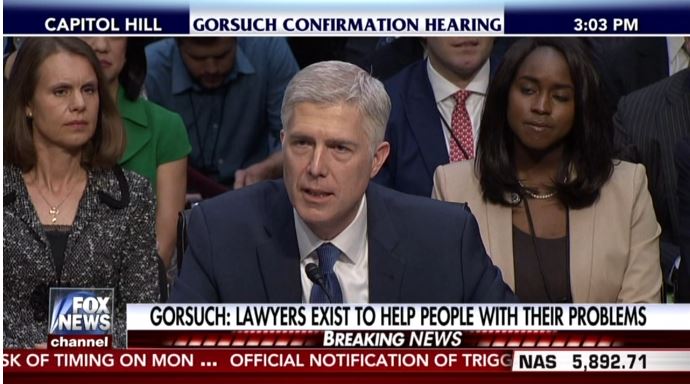 On Monday, the liberal broadcast networks and cable outlets tag-teamed to ignore live opening day coverage of Judge Neil Gorsuch’s Senate Judiciary Committee hearing to become the next Justice to the U.S. Supreme Court, instead spending over 11 hours of live coverage on the FBI Director James Comey, addressing allegations of Russian collusion with the Trump campaign.

Gorsuch’s opening statement lasted only 16 minutes and nine seconds, but the broadcast and cable networks were so obsessed with Russia and putting the argument in the minds of viewers that Clinton lost the election because of Russia (not, say, her campaign stops, messaging, or scandals), that they failed to cover Gorsuch.

ABC, CBS, and NBC all broke into regularly-scheduled programming for the start of the House Intelligence Committee hearing, offering breathless live coverage with NBC fawning over Democrat Adam Schiff (Calif.) and painting only Republicans as partisans.

NBC spent over 49 minutes fretting about Russia causing Hillary Clinton to lose the election to President Trump while ABC came in with roughly 37 minutes of airtime. CBS brought up the rear with almost 16 minutes, consisting of the opening statements and testimony from the NSA’s Michael Rogers and FBI Director Jim Comey.

Over on CNN and MSNBC, they offered real-time, wall-to-wall airtime for the Comey hearing with only short pauses for the committee’s lunch break and the opening moments of White House press secretary Sean Spicer’s latest combative press briefing.

MSNBC shocked no one in the NewsBusters newsroom and devoted the most coverage to the Comey and Rogers grilling, awarding 5 hours, 2 minutes, and 51 seconds. Alas, CNN was not far behind, devoting 4 hours, 38 minutes, and 45 seconds.

While CNN was busy calling Monday “the worst and most perilous day” of the Trump administration and MSNBC had Brian Williams predicting that he hearings could “dissolve” the Trump presidency, Senate Judiciary Committee members gave statements praising and smearing Gorsuch.

However, viewers on CNN and MSNBC never had the chance to hear from their elected officials, Colorado Senators Cory Gardner (R) and Michael Benet (D) introducing Gorsuch, or Gorsuch himself giving a background of his life, work, and judicial philosophy.