Cue the sad trombone, folks. Despite the best efforts by Stephen Colbert, Bill Maher, Rachel Maddow, and other lefties, the “big three” of ABC, CBS, and NBC offered positive reviews of President Trump’s “profoundly different” Tuesday night speech to a Joint Session of Congress that “rested on words, including rebirth, hope, opportunity, and common good.”

NBC’s Meet the Press moderator Chuck Todd argued that it was “the same speech he's been giving over the last couple of months” on a substantive level, but “the striking thing was the tone.”

Today co-host Savannah Guthrie gushed that Trump “clearly felt loose and conversational and a genuine moment inside the hall tonight when he introduced the widow of Navy special officer Ryan Owens and you know, I think in terms of emotion, that clearly was the high point and he handled that very well.”

She added that Trump offered “a lot of soaring rhetoric and big, big promises, including, a quote in the prepared text, every problem can be solved.”

Former Bush administration official Nicolle Wallace agreed: “Absolutely and you have to consider that this was the best speech of his political career, his short political career.”

MSNBC host and NBC White House correspondent Hallie Jackson also noticed the delineation from his usual act of “throwing verbal grenades to members of Congress” as “[t]onight, he was offering a kind of an olive branch.”

“From the very beginning, the President set a tone that this speech would be different. Remember those opening few lines? It was a full throated condemnation of hate crimes and that is something he has come under fire before in the past for not speaking out strongly enough. This was the President coming out and saying, tonight is different,” she added. 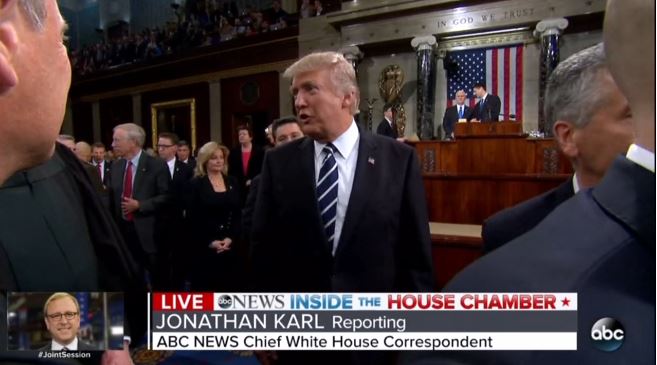 I was thinking as I was watching this, particularly the end of the speech, is this the same Donald Trump that we saw give that speech on the western front of the Capitol for the inauguration, where he talked about American carnage and where he lashed out at the political class, both parties? This was an entirely different message.

“But to hear Donald Trump say dream big, bold — you know — big things, to reach out. And you mentioned the lyrical moments, I mean, when we reached out to Carryn Owens, the widow of Ryan Owens, the Navy SEAL killed in Yemen. It was one of the — one of the more powerful moments I have seen in a State of the Union,” Karl told a similarly-perplexed George Stephanopoulos.

Republican strategist Alex Castellanos was also a part of ABC’s coverage, ruling that “Donald Trump was inaugurated on January 20th, but I think he became President tonight” due to “the long-awaited pivot” and “not a change in positions” but a change “from politics to governing.”

A frequent topic here on NewsBusters, political analyst Matthew Dowd blamed Trump for being the reason Americans are so divided. However, Dowd appeared to be forced begrudgingly into giving Trump some credit where it was due:

I’ll give the President. That was the most deliberate, disciplined speech I've ever seen him give in all the time we’ve been watching. The most disciplined, on message, on his thing, met the marks, did it all night long. It was much more celebratory than carnage. But I think the rubber is going to have to hit the road after tonight for a number of things.

Finally on CBS, CBS Evening News anchor Scott Pelley was moved by Trump’s address, commenting that it was “[a] profoundly different speech from the President” delivered “without anger or blame.”

“After his inaugural address in January that spoke of shuttered factories scattered like tomb stones and American carnage, tonight's speech rested on words, including rebirth, hope, opportunity, and common good. Also, the fewest personal pronouns of any Trump speech we've ever heard, a speech more about ‘we’ instead of a speech about ‘me,’” Pelley proclaimed.

Pelley turned to CBS This Morning co-host Norah O’Donnell and admitted that Trump’s recognition of Carryn Owens “was one of the most moving of any address like this that I can ever remember.” O’Donnell pointed out that “the most solemn responsibility of the commander-in-chief is to honor and to take care of veterans and he did that tonight.”

“It was just a very different speech for Donald Trump. He repeatedly reached across the aisle to Democrats. And you mentioned it. He talked about unity. He said why not join forces to finally get it done? It's a speech like I've not heard from him before,” opined O’Donnell. 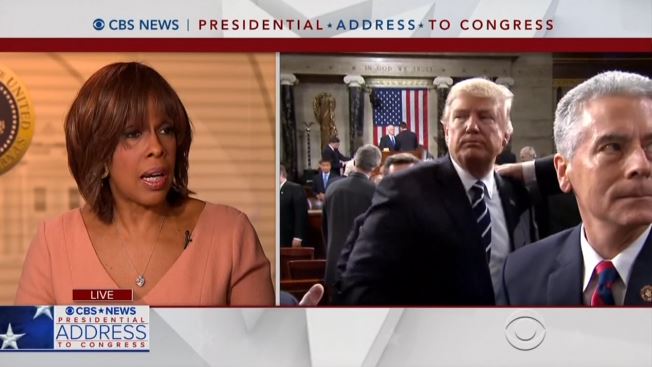 Even Obama family friend Gayle King had some praise for Trump:

When he said, listen, everything that's broken in this country can be fixed, and he proceeded to tick off all the things that can be fixed, that we are all the same, that we all bleed the same. And I really did feel he made an effort, like I've never seen Donald Trump before. He was talking to his base, but he was also appealing to people, I thought, for the first time, that there is something here for all of us, and that we need to do this together. I haven't heard him speak that way before.