Providing more reasons why it was an abomination he was allowed to moderate a GOP presidential debate, CNBC’s John Harwood took to Twitter on Tuesday where he offered Republican opposition to ObamaCare and racism as reasons why President Obama’s Democratic Party lost so many seats nationwide during his administration. Part of one tweet: "Obama's race amid white fear of cultural change."

Harwood’s argument began as a coherent one, as he noted that the “last 5 presidents have left both houses of Congress in opposition hands,” but that’s all I’ll grant him as he prefaced this accurate and unbiased statement by whining that this statistic was “for those making silly argument that Obama hurt Democratic Party.”

The next two tweets exposed his liberal bias and absurdity as he first cited “depth of financial crisis/Great Recession” and “accumulated angst over 30-year income stagnation” as two reasons the Democrats hemorrhaged power both on the state and federal levels.

Of course, Harwood made no attempt to explain how Democrats failed to ameliorate these problems despite having eight years in the White House and two with complete control of Congress. Further, he provided no explanation as to why these factors hurt Democrats in the long run, but still led to Obama’s reelection in 2012.

The CNBC correspondent’s latter tweet served up more liberal spin by alluding to racism stymying the President’s agenda (as opposed to policy disagreements or ObamaCare simply being a complete failure): 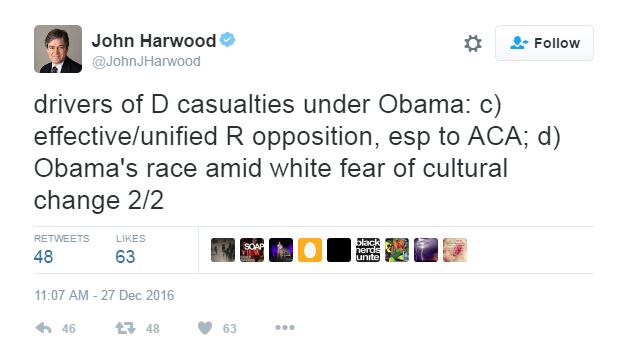 While Harwoods historical point is true, the losses the Democratic Party witnessed in the last eight years have sent the party careening to its lowest level of state legislative seats and resulted in, according to The Hill, Republicans “hav[ing] captured control of 27 state legislative chambers Democrats held after the 2008 elections.”

As for seats in Congress, Stephen Dinan of The Washington Times reported this following the November 8 election:

The past several years under Mr. Obama have not been kind to Democrats. When he took office in 2009, Democrats had an effective 58-seat majority in the Senate, had a staggering 256 seats in the House and held 28 governorships.

They lost the House and ceded the majority of governorships in 2010, held serve in 2012 with Mr. Obama’s re-election, then lost control of the Senate in 2014 and control of the White House this year. All told, Democrats have shed 63 House seats, 10 Senate seats and 12 governorships.

Here is a screen-cap of Harwood’s relevant tweets from December 27: 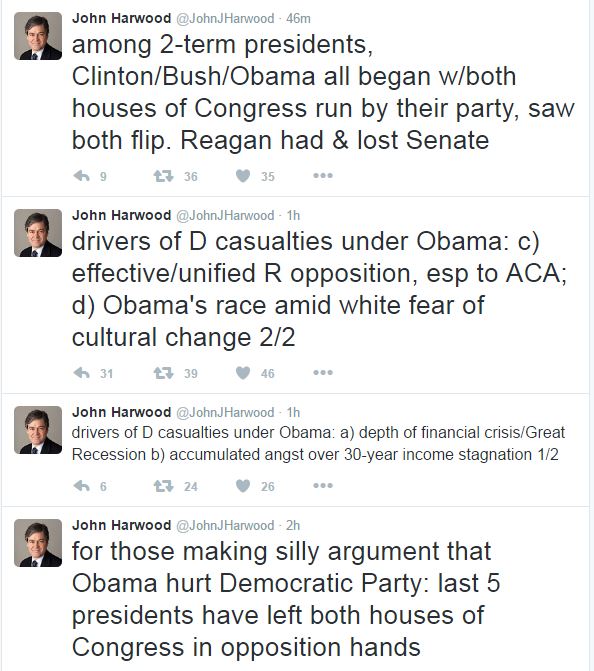