With little time left between the conclusion of Monday’s presidential debate and the late local newscasts, ABC, CBS, and NBC used the roughly 20 minutes before 11:00 p.m. Eastern to offer emotions ranging from complimenting Hillary Clinton as “pleasant” and hitting Donald Trump as “condescending” and “rude” to even wondering why Clinton’s e-mails were barely mentioned.

Going first to NBC, former NBC Nightly News anchor Tom Brokaw conceded that “[i]t was not a knockout evening” for either candidate but quickly touted Clinton for having “composure” in exhibiting “her mastery of the detail was consistent throughout and she was pleasant throughout.”

Brokaw added that Trump “started in a more organized fashion than we've seen in the past, but then he resorted to the kind of bombast that he's used now” and didn’t succeed in gaining any additional voters.

As Brokaw complimented Clinton, ABC/NPR analyst Cokie Roberts used one of her statements to go after Trump. Roberts lamented at the onset that on birtherism and Iraq, Trump “started in one of his rants” and thus drew concerns to some voters about whether they “are ready to accept that and see it as something that they can imagine in the White House.”

She bemoaned and played the gender card in hitting Trump’s posture: “[H]is facial expressions throughout were condescending and in ways, just rude and early in the debate, he was also bullying, so, I think there are a variety of things here that did not work for him.”

Over on the more timid CBS, CBS Evening News anchor Scott Pelley turned to Republican vice presidential candidate/Indiana Governor Mike Pence and blasted the lack of decorum: “It broke down there at the end. There was a lot of name calling. I think people would find that disappointing in a presidential debate.” 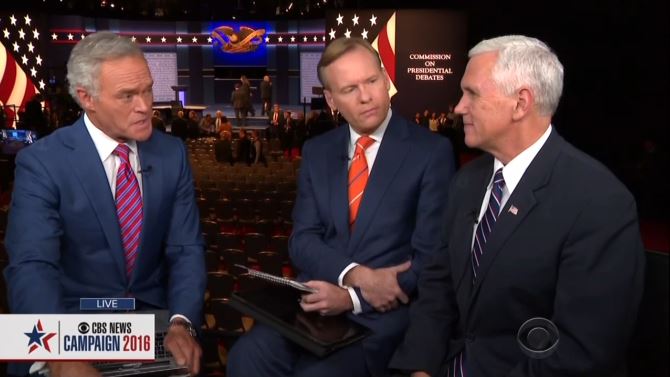 When Pence explained that he “was disappointed to see the way Hillary Clinton, frankly, was casting insults through most of this debate,” Face the Nation host John Dickerson followed up:

DICKERSON: What did you find offensive? You said she said things that were offensive. What was offensive?

PENCE: Well, I just think — all throughout, John, what we saw Hillary doing, I thought, was making demeaning comments and making comments that you know, what you heard coming into this there might be some attempt to try to provoke Donald Trump.

Two intriguing moments of the post-debate coverage on the networks involved Clinton’s e-mail scandal on both ABC and CBS. After Today co-host Matt Lauer was panned for simply questioning Clinton about the massive scandal at a town hall, the crew on ABC seemed befuddled it barely came up.

ABC’s World News Tonight anchor David Muir wondered if Clinton truly did “anything to help herself on honesty and trustworthiness” and chief anchor/Clinton Foundation donor George Stephanopoulos wondered: “That's one of the big questions and Martha Raddatz, tonight, e-mails didn't really come up. Hillary Clinton gave one of her shortest answers yet, didn’t really hear much about the Clinton Foundation either. Yeah.”

Raddatz pointed out that after initially bringing them up, Trump “didn’t come back to them which was very surprising” and neither did “no one” else (i.e. Hillary Clinton or debate moderator Lester Holt).

“She gave that very concise answer, saying it was a mistake, and that seemed to end it. I think we'll probably hear more about that in the coming days from the Trump campaign,” she added.

A few minutes before this on CBS, Pelley also expressed confusion at the lack of time spent on Clinton’s e-mails:

What was also interesting about that moment is that was the first time, perhaps the biggest time that the crowd erupted when he mentioned the e-mails and even with that support from the crowd here at Hofstra, he didn't go back to the issue of the e-mails. It never came up again.