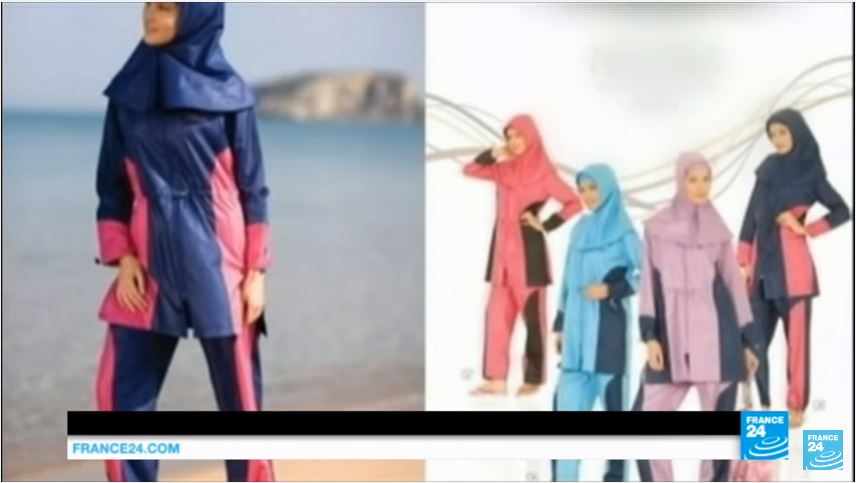 The New York Times on Friday offered a one-two punch when it came to defending French Muslims and particularly women wearing “burkinis” that allow them to comply with Islamic laws of women staying completely covered and lambasting those raising concerns about women’s rights as “farcical” and downright “bigotry” preventing French women from “widen[ing] their sense of identity.”

Naturally, the paper’s editorial board was the most direct in Friday’s print edition with the title “France’s Burkini Bigotry” that bemoaned how “France’s perennial problem with Muslim women’s attire has taken its most farcical turn yet with a new controversy over the ‘burkini,’ body-covering swimwear whose name is an amalgam of burqa and bikini.”

Using the strawman argument that somehow “burkinis” are seen by some government officials as “a new weapon of war,” the paper also smeared Christians appeared suddenly concerned that “[t]his hysteria threatens to further stigmatize and marginalize France’s Muslims at a time when the country is listing to the Islamophobic right in the wake of a series of horrific terrorist attacks.”

It then argued that the designer of the suit didn’t particularly intend of this to happen but rather have something for “women who did not want to expose their bodies — for whatever reason — the freedom to enjoy water sports and the beach” (and not, you know, anger their overbearing husbands and imams).

The piece then concluded that very sinister motives were at hand on the part of French citizens raising red flags about women being devalued:

[A]t the heart of the dispute is something far darker: French politicians’ paternalistic pronouncements on the republic’s duty to save Muslim women from enslavement — by dictating to them what they can and can’t wear. The burkini rumpus is also a convenient distraction from the problems France’s leaders have not been able to solve: high unemployment, lackluster economic growth and a still very real terrorist threat.

Back in the news section, a column by reporter Amanda Taub was part of The Times’s “The Interpreter” series took a similar line smearing the questions as “inherently head-spinning” creating “[t]he obviousness of the contradiction” that she diagnosed as “something deeper going on” and most chiefly a symbol of colonialism.

“This, of course, is not really about swimwear. Social scientists say it is also not primarily about protecting Muslim women from patriarchy, but about protecting France’s non-Muslim majority from having to confront a changing world: one that requires them to widen their sense of identity when many would prefer to keep it as it was,” fretted Taub.

As mentioned a few lines above, Taub chalked up this debate to the French looking to exert new forms of oppression upon the Muslims who either directly came from or were family of Muslims in former French colonies:

Colonialism set France up for the identity crisis it is experiencing today by ingraining a sense of French national identity as distinct from and superior to Muslim identities — and, at the same time, holding out the promise of opportunity to colonized Muslims, who began migrating in large numbers to France. The resulting clash has often played out in debates over clothing.

The veil remained a potent symbol of difference as colonialism collapsed after World War II and Muslims from colonized countries flocked to France. But now, that difference was within a country trying to sort out its own postcolonial identity.

Of course, Taub concluded by laying out what her solution:

The veil is an especially potent symbol of anxiety over assimilation because wearing it is a choice. Whereas fixed characteristics like race or skin color do not imply any judgment on French culture or values, clothing implies a decision to be different — to prioritize one’s religious or cultural identity over that of one’s adopted country.

France does have another choice: It could widen its national identity to include French Muslims as they are. This may feel scary to many French, more like giving up a comfortable “traditional” identity than gaining a new dimension to it.