No Surprise Here: NYT Backs Hillary as ‘One of the Most...Deeply Qualified’ ‘Candidates in Modern History’ 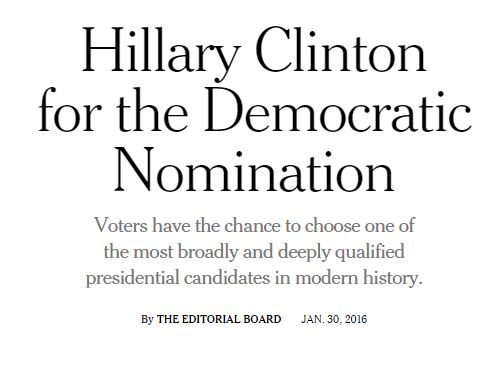 In what should come as a shock to no one, The New York Times editorial board endorsed Hillary Clinton in the Democratic primary Saturday afternoon (for Sunday’s print edition) in a glowing piece that gushed in the subhead that Clinton is “one of the most broadly and deeply qualified presidential candidates in modern history.” Additionally, it only mentioned her e-mail server once with nothing on Benghazi or the Clinton Foundation scandal.

The editorial began the over 1,100 word piece by talking not about Clinton but lambasting Republicans for having spent “the past painful year....bombarding Americans with empty propaganda slogans and competing, bizarrely, to present themselves as the least experienced person for the most important elected job in the world.”

Marginalizing the GOP candidates as illegitimate, The Times hyped that liberals have been having “a substantive debate over real issues” and, with Clinton, they “have the chance to nominate one of the most broadly and deeply qualified presidential candidates in modern history.”

The paper explained why it didn’t endorse socialist Senator Bernie Sanders by affirming that he “does not have the breadth of experience or policy ideas that Mrs. Clinton offers” and his policy proposals “aren’t realistic, while Mrs. Clinton has very good, and achievable, proposals in both areas.”

It also slammed Sanders as “relatively weak” on gun control but surprisingly ruled that Clinton would be better at furthering leftist economic policies despite her ties to Wall Street than the “comical” GOP:

Mr. Sanders has scored some rhetorical points against Mrs. Clinton for her longstanding ties to Wall Street, but she has responded well, and it would be comical to watch any of the Republican candidates try to make that case, given that they are all virtually tied to, or actually part of, the business establishment.

Touting Clinton as someone who’d “support the well-being and rights of working Americans,” the ultra-liberal paper hailed her as the most credible in improving the lives of working families despite being in the political and financial elite for decades. On abortion, it applauded her devout devotion to abortion and the repeal of the Hyde Amendment.

After going on for four paragraphs about Clinton’s supposed accomplishments as secretary of state without a hint about what transpired in Benghazi, The Times excused her flip-flop on the Trans-Pacific Partnership (TPP) before barreling toward a fawning conclusion extolling her “steeliness that will serve her well in negotiating with a difficult Congress” and dealing with Republicans:

It will also help her weather what are certain to be more attacks from Republicans and, should she win the White House, the possibility of the same ideological opposition and personal animus that President Obama has endured. Some of the campaign attacks are outrageous, like Donald Trump’s efforts to bring up Bill Clinton’s marital infidelity. Some, like those about Mrs. Clinton's use of a private email server, are legitimate and deserve forthright answers.

Hillary Clinton is the right choice for the Democrats to present a vision for America that is radically different from the one that leading Republican candidates offer — a vision in which middle-class Americans have a real shot at prosperity, women’s rights are enhanced, undocumented immigrants are given a chance at legitimacy, international alliances are nurtured and the country is kept safe.

The editorial board also offered a so-called “endorsement” for the Republican race in a piece that was only roughly 600 words and backed moderate Republican Governor John Kasich (Ohio).

However, readers of the piece would have to scroll down to paragraph six out of eight to even get to the part when they mention Kasich’s name as the first five paragraphs were spent tearing down his opponents ranging from Donald Trump to a Ted Cruz that they deemed as running a campaign not “about constitutional principles” but “ambition.”

After shots at Jeb Bush, Marco Rubio, Ben Carson, and Chris Christie, it finally brought up Kasich and his moderate positions as “the only plausible choice for Republicans tired of the extremism and inexperience on display in this race.”

“Still, as a veteran of partisan fights and bipartisan deals during nearly two decades in the House, he has been capable of compromise and believes in the ability of government to improve lives,” The Times lamented.