Networks Hail Hillary ‘On the Attack’ Against Bernie, But Continue E-Mail Scandal Blackout

The major broadcast networks offered on Thursday night five minutes and 15 seconds on the Democratic presidential race between Hillary Clinton and Bernie Sanders, but made no effort to mention the new details that broke this week pertaining to the highly classified nature of some e-mails found on her private server and instead trumpeted her “on attack” and “unloading” on Sanders.

On NBC Nightly News, anchor Lester Holt proclaimed in one of the opening teases that Clinton was “on the attack” with “11 days to Iowa” as “Hillary Clinton unloads on Bernie Sanders.”

Moments later before a report from Clinton correspondent and MSNBC host Andrea Mitchell, Holt hyped that Clinton had “fir[ed] off her most direct attacks yet at Bernie Sanders as their race grows increasingly tight.”

The ever reliable Clinton stenographer in Mitchell gushed that with the fight between the two candidates close, the former secretary of state “went after Bernie Sanders with her toughest attacks yet...hammer[ing] Bernie Sanders, claiming he can't deliver on his promises.”

ABC’s World News Tonight did little better but noted the new CNN/ORC poll that has Sanders with a eight-point lead in Iowa. Nonetheless, Democratic campaign correspondent Cecilia Vega explained that Clinton was “not giving up” on first place and “turned up the heat” on the socialist senator as she told CNN’s Wolf Blitzer that her allies “are concerned” that he’s unelectable.

Over on the CBS Evening News, congressional correspondent Nancy Cordes offered only a slightly tamer analysis: “Hillary Clinton went after Bernie Sanders' commander-in-chief credentials today, calling him naive for wanting to normalize relations with Iran, and she claims the long-time lawmaker hasn't thought his ideas on diplomacy through.”

Overall, none of the evening newscasts have yet to utter word on news from Tuesday that some of Clinton’s e-mails contained some of the country’s most secretive and highly classified programs. On the morning show front, only ABC’s Good Morning America and CBS This Morning provided mere seconds to the bombshell.

With ABC, CBS, and NBC out to lunch, the Fox News Channel (FNC) evening newscast Special Report has offered extensive coverage with it serving as the lead story on Tuesday and Thursday. Thursday’s segment started with host Bret Baier setting the scene by explaining that:

What was once referred to as a drip-drip of damaging information in the Hillary Clinton email scandal has now become a cascade. The biggest question now resides with the FBI and its expanding investigation, a decision about the next moves, that clearly threatens Clinton's presidential campaign. We are learning tonight just how far above top secret some of Clinton's unsecured emails were and White House aides are weighing in on Clinton's startling accusation against one of the President's appointees.

As for what transpired on Thursday, Herridge noted that “[t]he White House seemed to distance itself from both Hillary Clinton's attack on the intelligence agencies reviewing her emails and their conclusion that some were beyond top secret...Nonetheless, Secretary Clinton questioned the motives and the findings.”

Citing two separate sources, Herridge revealed that “not even senior lawmakers with oversight of the State Department are permitted to read the emails from highly classified special access programs without additional permission from the intelligence agencies who ran them.”

The relevant portions of the tease and segment from January 21's NBC Nightly News can be found below. 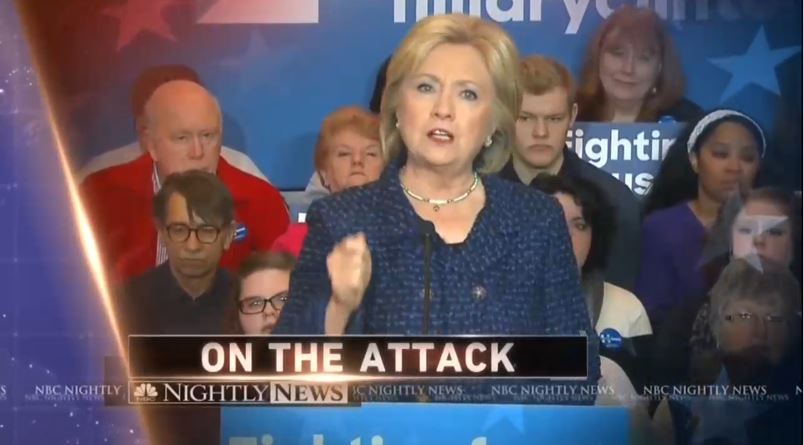 [ON-SCREEN HEADLINE CAPTION: On the Attack]

[ON-SCREEN HEADLINE CAPTION: On the Attack]

HOLT: Let's turn to the battle for the White House. Hillary Clinton firing off her most direct attacks yet at Bernie Sanders as their race grows increasingly tight...We’re covering both races beginning with NBC's Andrea Mitchell in Des Moines. Andrea?

ANDREA MITCHELL: Good evening, Lester. With that race getting tighter on the Democratic side, Hillary Clinton went after Bernie Sanders with her toughest attacks yet. At a small private college in Iowa, Clinton hammered Bernie Sanders, claiming he can't deliver on his promises.

HILLARY CLINTON: I'll tell you, I'm not interested in ideas that sound good on paper but will never make it in the real world.

INDEPENDENT SENATOR BERNIE SANDERS (Vt.): They’re not pipe dreams. Virtually every plan we have brought forth is supported by the American people.

CLINTON: He suggested we invite Iranian troops into Syria. That is like asking the arsonist to be the firefighter

MITCHELL: Touting her own experience after 9/11 and as secretary of state in a new TV ad.

NARRATOR OF CLINTON AD: The one candidate for President who has everything it takes.

MITCHELL: But the ad Iowa is buzzing about is Sanders, using powerful images set to Simon and Garfunkle's iconic anthem America, aimed at inspiring the students who have been flocking to Sanders' rallies, like college sophomore Gabe Shabelian, who’s attended events for both candidates several times.

GABE SHABELIAN: My vision for the future of America is definitely what Bernie Sanders wants to have happen here, but I believe that there are steps leading up to that vision that need to take place and I think Hillary can probably help construct that vision. 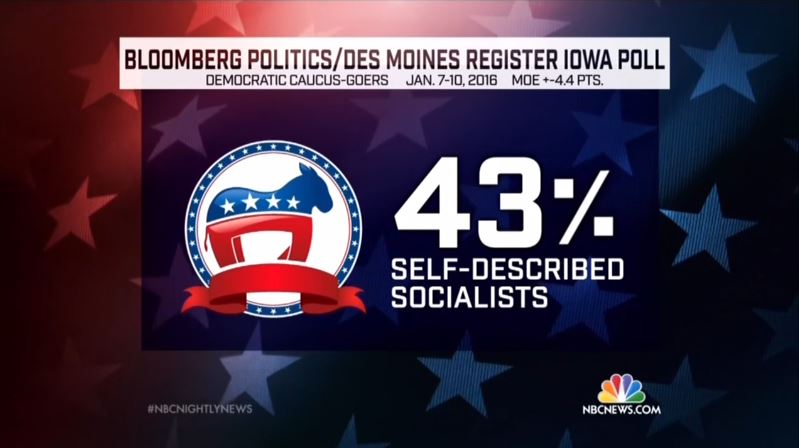 MITCHELL: It's your head versus your heart on caucus night?