With New Year’s Eve upon us, NBC’s Today dedicated a segment in its 9:00 a.m. hour on Thursday to looking back at the year in news, politics, and entertainment. Not surprisingly, the liberal network made no mention of the Planned Parenthood baby parts video scandal, Hillary Clinton’s private e-mail server, the Clinton Foundation scandal, and Benghazi to name just a few.

Speaking with Rolling Stone’s Joe Levy, co-hosts Natalie Morales and Dylan Dreyer started with the year in news by not mentioning the scandal concerning Levy’s publication and the University of Virginia but instead first talked about Bill Cosby and what’s transpired concerning the sexual misconduct allegations made against him in the past year.

Turning to the numerous tragedies and terror attacks that happened in 2015, Dreyer lamented that “it was such a sad year, with all the shootings and the gun violence we saw.”

Levy agreed, stating that “we had far too many shootings to talk about” whether it was Emmanuel AME Church in Charleston, South Carolina, the shooting on live TV in Roanoke, San Bernardino, and Paris (both in January and November).

Morales and Levy rounded out the news category by reflecting on the “symbol of peace” that was seen with Pope Francis’s visit to the United States. They moved onto politics where the conversation was dominated by Donald Trump’s candidacy and his sustained lead in the polls over rivals like Senator Ted Cruz.

As for the Democrats, the trio made no mention of Hillary Clinton’s pitfalls this year and Morales instead gushed that the former secretary of state is “looking pretty good, as she's putting her husband, former President Bill Clinton to work on the campaign trail. He’s going to head out and do a couple of events for her coming up in the new year.”

Concluding the entertainment block, Levy hyped that it was “a big year for Caitlyn Jenner” with the Vanity Fair cover and award at the ESPYs.

“At the ESPYs, she said, you know, a few months ago, I never met a trans person. She was actually giving that opportunity to a lot of America right then. It was really a wonderful and amazing thing,” gushed Levy.

Looking back to this date last year, this writer happened to find the same censorship when each of the network morning shows (ABC’s Good Morning America, CBS This Morning, and NBC’s Today) aired year in review mash-ups and completely ignored topics such as Jonathan Gruber, bad ObamaCare news, sagging poll numbers for President Obama, and the pro-democracy protests in Hong Kong.

DYLAN DREYER: 2015 saw its fair share of highs and lows, especially in a lot of the news stories that grabbed headlines.

DYLAN DREYER: And it was such a sad year, with all the shootings and the gun violence we saw.

LEVY: Unfortunately, we had far too many shootings to talk about. Far, far too many. In Charleston, South Carolina, nine killed in a church. On live TV in Virginia, a cameraman and a news reporter killed. Just —

LEVY: San Bernardino, of course, Colorado Springs, three killed there. The Paris attacks, as well, both in January and then recently. Just this month.

MORALES: Sadly, it seems, it's not going to end either. That’s the way it continues.

MORALES: Moving over now to — actually, a symbol of peace. The Pope's first visit to the United States. Uplifting moment.

LEVY: He stopped in Washington, D.C. where he described himself as the son of immigrants. He was here in New York, celebrated Mass for 20,000 in Times Square. Then on to Philadelphia where he talked about America as a land of religious tolerance and freedom.

MORALES: That was a moment we needed. Absolutely. Uplifted our year. 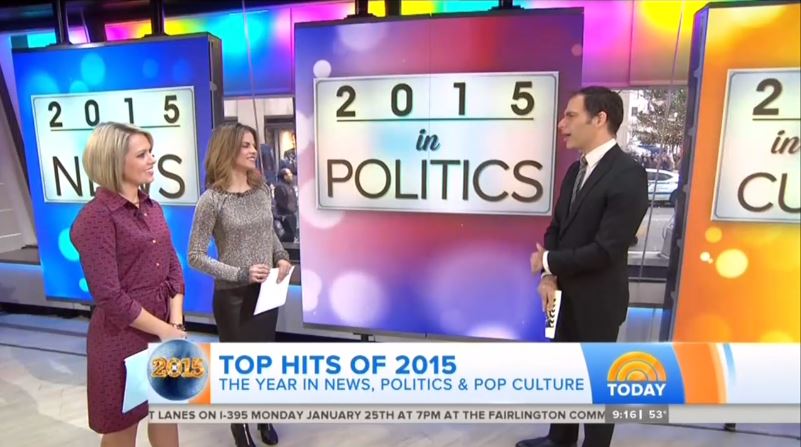 DREYER: So, a lot of politics. A shy man by the name of Donald Trump took headlines.

LEVY: I'm unfamiliar with who you mean. He did take headlines. He announced his candidacy descending on his escalator. We didn't take it quite seriously then. We were waiting for it to end. Still ahead in the polls. A recent CNN poll of Republicans puts him ahead of Ted Cruz. 39 percent to 18 percent for Cruz. We'll see what happens in February when we finally get to Iowa and New Hampshire.

MORALES: Huge. Also, Hillary Clinton looking pretty good, as she's putting her husband, former President Bill Clinton to work on the campaign trail. He’s going to head out and do a couple of events for her coming up in the new year.

LEVY: That’s right and guess who had something to say about that? Donald Trump.

MORALES: As we've heard here on our program.

LEVY: Hillary has said recently that Donald Trump has a penchant for sexism. He insulted Hillary and Donald Trump has a, I'm rubber, you're glue philosophy. He's turned that around, saying, well, you're married to Bill Clinton. I'm not quite sure what it means but let's look for it to heat up in 2016.

MORALES: Oh, even more so. Absolutely.

DREYER: This was a huge year for girls.

MORALES: We love that.

DREYER: And women, I guess. We should call them women.

LEVY: Let's call them women. Let's call them powerful women on television, in the movies, in music. We're talking about Jamie Alexander on the breakout hit, Blindspot. Melissa Benoist on Super Girl. Taraji P. Henson in Empire and of course, Amy Schumer jumped to the big screen with Trainwreck and unknown singer named Adele, who made an impression this year, breaking records, shattering records. It took her three days to have the biggest selling record in 2015. That's amazing.

MORALES: And just quickly, we have to mention, Caitlyn Jenner.

LEVY: Of course, a big year for Caitlyn Jenner. On the cover of Vanity Fair, getting a courage award at the ESPYs. It was a breakthrough moment. At the ESPYs, she said, you know, a few months ago, I never met a trans person. She was actually giving that opportunity to a lot of America right then. It was really a wonderful and amazing thing.