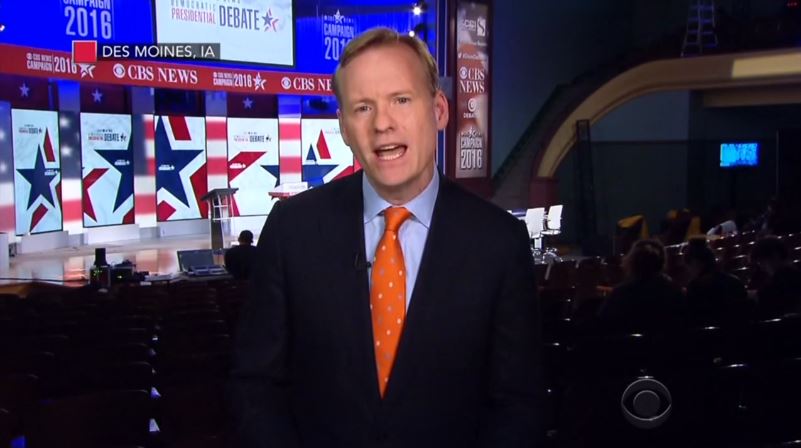 According to Politico’s Hadas Gold and Annie Karni, Saturday night’s Democratic presidential moderator John Dickerson of CBS News met privately with each of the three campaigns for separate, private meetings to preview the debate and tried to innocently be billed as “informational in nature.”

The pair spun the revelation as merely CBS “tak[ing] advantage of the smaller pool by doing some intense research” with Dickerson sitting down with representatives from the Hillary Clinton, Martin O’Malley, and Bernie Sanders campaigns “to discuss the major issues at play in the race.”

“[Dickerson] and his team were very interested in getting to better know the senator's stand on a wide spectrum of issues, what he would do about income inequality in this country,” said Bernie Sanders spokesman Michael Briggs. He said they discussed issues where there are real differences between the candidates -- including gun control, the death penalty and raising taxes on the middle class. “John Dickerson's a smart, impressive guy who cares a lot about the issues,” Briggs said. “I'm sure we'll see a smart, issues oriented debate.”

It should be noted that, for the last debate, Gold and Karni reported that the moderator in CNN’s Anderson Cooper did not meet with then-five campaigns to talk strategy.

This liberal pandering by the Face the Nation anchor is nothing new and should come as no surprise for readers of this space. My colleague Geoffrey Dickens compiled on Friday morning a thorough and expansive set of examples in which Dickerson flaunted his liberal bias from his time as the anchor of the CBS Sunday political talk show to appearances on CBS This Morning and CBS Evening News to his career as a writer for Slate.

Borrowing a page from NewsBusters contributing writer P.J. Gladnick, here’s a exit question for readers: Would you expect the Republican candidates to ever be given this courtesy ahead of a debate if it aired on CBS (or any of the other liberal networks)?