Syndicated columnist and FNC contributor Charles Krauthammer was Bill O’Reilly’s first guest on the 11:00 p.m. Eastern edition of The O’Reilly Factor after Wednesday’s CNBC debate and tore into the moderators for a “most appalling performance” in which they were “obnoxious,” “interrupting,” and “disorganized.”

Asked by O’Reilly for his “headline” from the third Republican presidential debate, Krauthammer started by declaring that it was “the most appalling performance by the moderators that I can remember seeing in a debate” as “[t]hey were, in the end, obnoxious.”

While it was almost certainly unintended, Krauthammer pointed out that: “I think what they did was they were able to set themselves up as a foil for the Republicans, so I think it actually strengthened the field and made them look better.”

>> Find all of NewsBusters‘ coverage of the 2016 presidential election here <<

He added moments later that moderators John Harwood, Becky Quick, and Carl Quintanilla “were all flaming liberals” who showed that they’ll never be voting in a Republican primary based on their “lack of self-restraint, the arrogance, interrupting and it was also disorganized” and “not well done.”

Along those same lines, Media Research Center President Brent Bozell issued a statement after the debate in which he ruled that this debate will go down as an “encyclopedic example of liberal media bias” for the ages.

The relevant portions of the transcript from the 11:00 p.m. Eastern edition of FNC’s The O’Reilly Factor on October 28 can be found below. 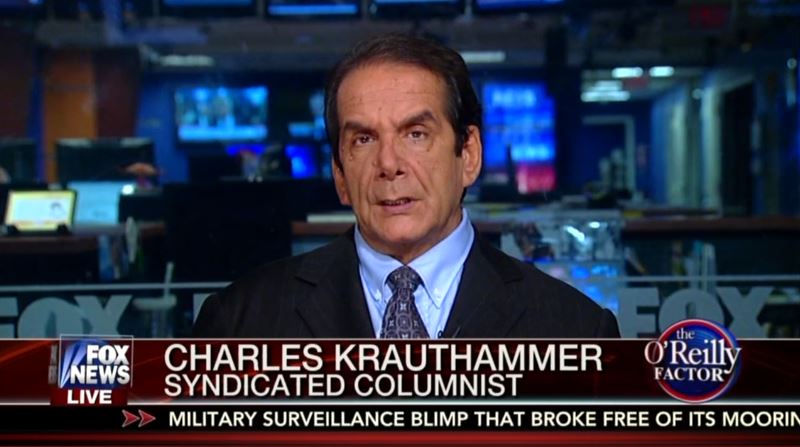 CHARLES KRAUTHAMMER: Well, I think the headline for me is the one for you. This is the most appalling performance by the moderators that I can remember seeing in a debate. They were overreaching, they were getting in the way. They were, in the end, obnoxious and I think what they did was they were able to set themselves up as a foil for the Republicans, so I think it actually strengthened the field and made them look better. The second headline, I think, was is that Trump — it was the first non-Trump-centered debate. It wasn't about him, it didn’t revolve around him. I thought Trump did okay. He made no mistakes. I thought he restrained himself in a good way. It probably helped himself somewhat. Because of that, this is the first time that you got to see this for the field. I thought it was very impressive, as a group, the way that the group performed. The third headline is the winners and the winners, I thought, going away, the winner was Rubio, with the Chris Christie surprisingly strong, and Cruz. I thought that was the gold, the silver and the bronze.

BILL O’REILLY: Here’s my question. Do you believe that CNBC, an arm of NBC News, which is a liberal concern, went in trying to denigrate the Republican candidates?

KRAUTHAMMER: I don’t think this is a corporate position. I think the panelists were all flaming liberals. I don't know who it said none of you is going to be a voter in the Republican primary and it showed. I mean, this is just the bias and also the lack of self-restraint, the arrogance, interrupting and it was also disorganized. It was not well done, but I thought Rubio was on the defensive, but this is why he did so well. No one pivoted. He knew he was going to be hit with that and it came from Bush, who obviously had prepared it and I think Rubio came off that very strong. He got the first, I think, applause from the audience as a result of that and Christie also, I thought, was a guy who pivoted. The best question of the night was the most unexpected. It was an innocuous one about fantasy football. It went to bush. He showed he's a good man, he was a good governor but he ain't nimble and he just fumbled around, well, it ought to be regulated but, then again, I don't think the feds ought to regulate it and Christie said wait a minute. We've got these troubles and ISIS, we’ve got the debt and we’re doing — I mean, I thought, what he did there, he came off attacking big government idea. The second nemesis of conservatives is big media and that’s where Rubio scored and that’s why I thought they got such a strong response.