While some of the questioning could have obviously gone farther or been more substantiative, it was a start and clean break from the gooey Clinton infomercial that viewers on NBC had to endure on Monday’s Today with Clinton and co-host Savannah Guthrie.

Woodruff began with a series of questions allowing Clinton to state her opposition (and latest flip-flop) to the Trans-Pacific Partnership (TPP) before she stepped in to wonder if it means President Obama is “wrong” and cited Asian experts in emphasizing that a rejectionof the deal could “decrease the influence of the U.S. in Asia.”

Your private email server. The Washington Post fact-checker Glenn Kessler wrote this weekend that when you speak publicly about how you handle the disclosure requests, you don't include the fact that the first request came just to you from the State Department based on the congressional inquiry. 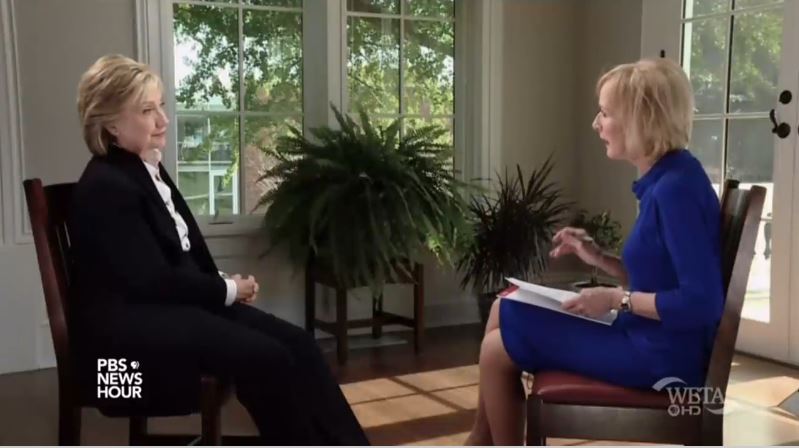 After a non-answer from the former secretary of state, Woodruff followed up:

But the first request came to you alone in response to the committee and I guess Glenn Kessler's point is this is the indication that the State Department did not realize before that that you were conducting government business on your – solely on your private server.

In one of the few questions that pandered to Clinton from the left, Woodruff posed this hypothetical that she argued might have staved off critics:

Why wouldn't it have been better at the very beginning of all this to simply say, I did this, I wanted a private server because I have been through this kind of thing before, I didn't want Republican congressmen rifling through my personal e-mails. Wouldn’t that have done away with the controversy, done away with people now saying they don't trust you?

As for a more compelling exchange, the PBS host pushed Clinton on whether the administration failed to spot the reemergence of Vladimir Putin as President in 2011 and his subsequent aggressive moves since on the world stage:

WOODRUFF: You’ve dealt President Putin. You favored the so-called reset with Russia in 2009. My question is, did you and others in the administration misread Putin and underestimate what he was capable of doing? 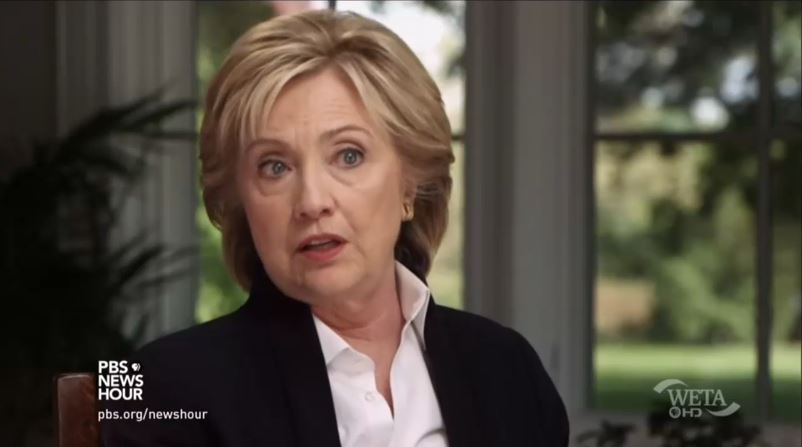 CLINTON: Remember, when President Obama came into office, Putin was not president. Medvedev was president and Medvedev turned out to be a good partner.

WOODRUFF: But Putin was always in the background.

CLINTON: He was, but he was letting Medvedev make the decisions backed up by him. Now, when Putin decided in fall of 2011 that he wanted to be president and basically announced it, we knew that we were going to have a lot tougher time because he was taking back the presidency to assert himself and, therefore, Russia.

WOODRUFF: Doesn't that add up to misreading what was going on?

Woodruff moved away from foreign policy back to domestic issues for the final portion of the interview with a short section prodding Clinton on how much her views of gun control contrast with those of Sanders. In the last chunk, however, things grew testy again when the NewsHour co-anchor pointed out that super PACs backing Clinton have begun attacking Sanders with one reportedly to be producing opposition research to attack Biden if he enters the race.

Woodruff asked Clinton at one point if she would “call on them to cease and desist and stop criticizing Senator Sanders” with a quick interruption to demand that she explain whether or not she’s content with Biden being attacked already. When Woodruff tried to ask a fourth question on this, Clinton grew flustered and snapped:

WOODRUFF: But, for you, you're saying you weren't aware they were doing this and you don't approve of it, but the fact they're doing it isn't that really an effort to intimidate the Vice President against getting into the race?

CLINTON: Judy, I have no – I don't know anything about it. I can't comment on it any further than I have.