Networks Fret Conservatives Posed ‘a Thorny Obstacle’ to Boehner; Will Force Him to be ‘More Confrontational’

On Tuesday night, each of the major broadcast networks devoted time to covering the swearing in of the 114th Congress and the race for House Speaker that saw John Boehner retain his post, but not without 25 conservatives voting in dissent against the incumbent Republican.

Overall, the networks lamented how the group presented “a thorny obstacle to Boehner's leadership” and, in turn, will force him to be “more confrontational with President Obama” instead of "working with the President on some issues, including tax reform and trade." [MP3 audio here; Video below]

ABC’s World News Tonight with David Muir first teased its segment by stating that there was a “behind the scenes gamble” and “the coup that fell apart” on the House floor. Later during the story, ABC’s chief White House correspondent Jonathan Karl stated that it “was quite a rebellion” of conservatives who believe that Boehner “has been too easy on President Obama.”

Karl added that, with the breaking off of “25 tea party Republicans,” there exists “a significant faction of conservatives in the House that are going to be pushing Boehner to be even more confrontational with President Obama.”

The CBS Evening News with Scott Pelley featured two segments on the 114th Congress, with a report from congressional correspondent Nancy Cordes in addition to the re-airing of CBS This Morning co-host Norah O’Donnell’s interview with freshman Republican Congresswoman Elise Stefanik (N.Y.).

During her report, Cordes chose to characterize the voting against Boehner for Speaker as such: “It was a warning shot to GOP leaders as they consider working with the President on some issues, including tax reform and trade.”

However, to her credit, she was the only network reporter to mention that, despite a veto threat from President Obama, the proposed bill to pass the Keystone XL oil pipeline does have Republican and Democratic support.

The last remaining network, NBC, had by far the most biased coverage during its evening newscast, NBC Nightly News. Right from the beginning, anchor Brian Williams took a subtle dig at the makeup of the new Congress and ignored the fact that Congress is growing younger in age, more women and minorities are serving then ever, and more Senators are in the first term since 1981.

Instead, he said this: “The Washington Post has compiled these stats about your new Congress. It’s 80 percent white, 80 percent male and 92 percent of its members are Christian.”

After mentioning the fact that Senate Minority Leader Harry Reid was not present after being injured in an exercise accident, NBC News Capitol Hill correspondent Kelly O’Donnell opined that “[a] different kind of bruising awaited John Boehner” as “[a] small but noisy conservative rebellion of two dozen Republicans attempted to knock him out.”

Despite having enough votes to keep his job,  O’Donnell reported that the “conservative opposition remains a thorny obstacle to Boehner's leadership.”

The relevant portion of the transcript of ABC’s World News Tonight with David Muir on January 6 can be found below. 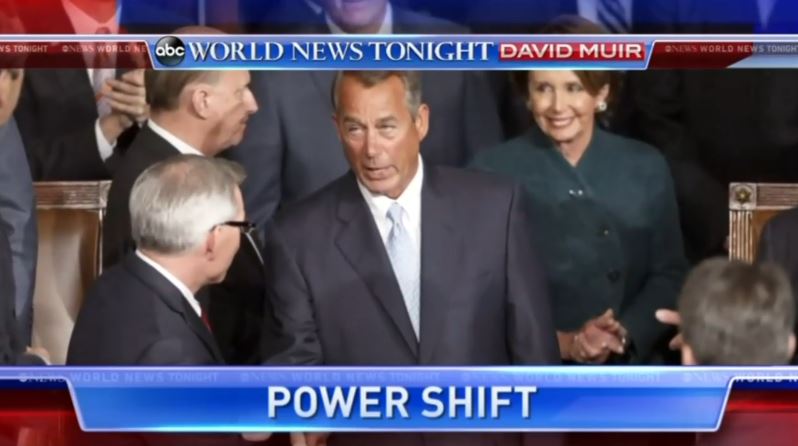 DAVID MUIR: The power shift in Washington. The behind the scenes gamble. The coup that fell apart.

DAVID MUIR: We're going to turn now to the power shift in Washington tonight. New members of Congress sworn in today. Republicans now controlling not only the House but the Senate, too and tonight, House Speaker John Boehner re-elected, holding onto his post, despite an effort – an attempt in what some have dubbed a conservative coup. So, let's get right to ABC's Jonathan Karl. Jon, Speaker Boehner holding on, but what was behind this? 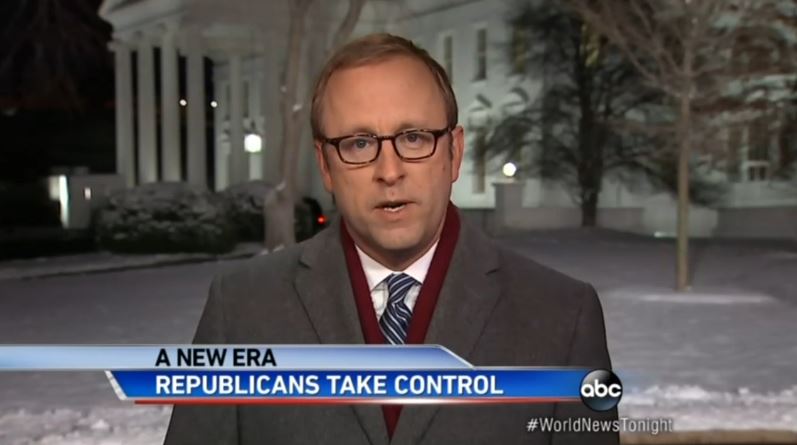 JONATHAN KARL: David, this was quite a rebellion. Speaker of the House John Boehner faced more defections from his own party than any Speaker in more than 150 years.

25 tea party Republicans tried to oust him because they believe he has been too easy on President Obama. So, he ultimately won, but what this means, David, is that you have a significant faction of conservatives in the House that are going to be pushing Boehner to be even more confrontational with President Obama.

The relevant portions of the segment from the CBS Evening News with Scott Pelley on January 6 are transcribed below. 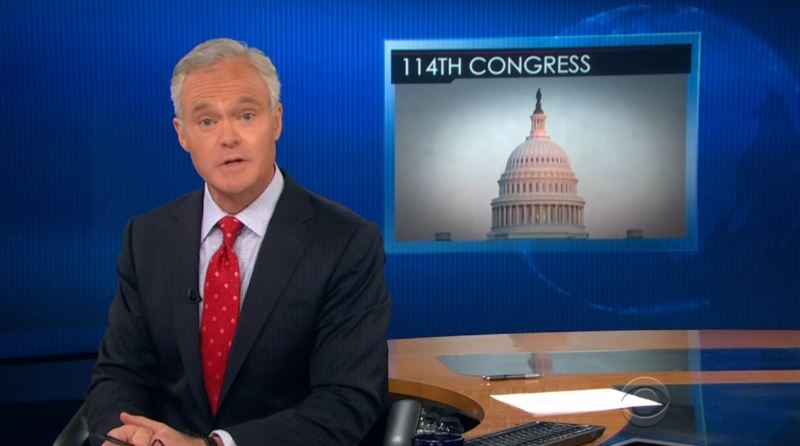 SCOTT PELLEY: In Washington, the new 114th Congress convened today with the Republicans now in charge of both Houses. They have a 246 to 188 seat advantage in the House of Representatives, and in the Senate, they have eight more seats than the Democrats, but for at least one moment today, Washington gridlock was replaced by lip lock. Yes, that is the Republican House Speaker planting one on the Democratic Minority Leader, but he's still holding that hammer in his hand.

CORDES: Republicans immediately introduced Senate Bill One, a bill to expedite construction of the Keystone XL oil pipeline, followed by a bill altering a key ObamaCare provision, requiring companies to cover full-time workers. Both bills have some Democratic support. Still, the White House promptly threatened to veto them, A taste of what's to come in Washington's new balance of power. 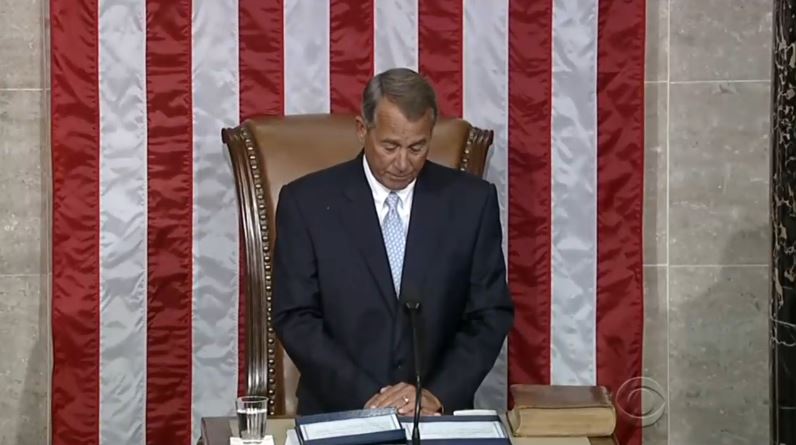 CORDES: And it's not just Democrats versus Republicans. In the House, Ohio's John Boehner was reelected Speaker, but two dozen of his fellow Republicans defected, voting for members they consider more conservative.

CORDES: It was a warning shot to GOP leaders as they consider working with the President on some issues, including tax reform and trade.

The transcript of the segment that aired on NBC Nightly News on January 6 can be found below. 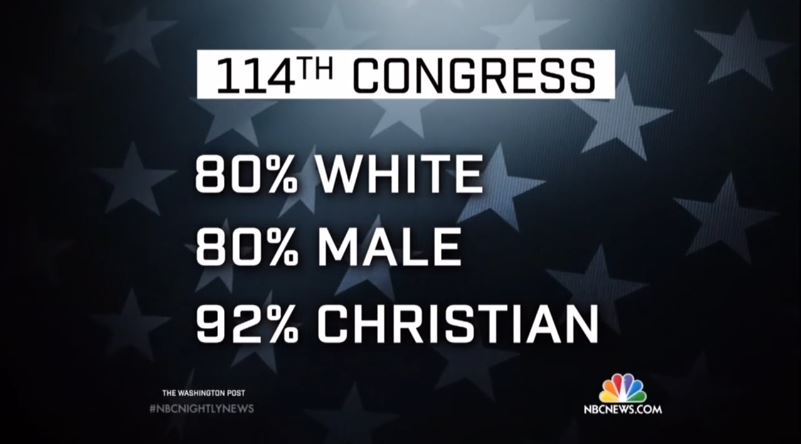 BRIAN WILLIAMS: A major shift took place in Washington today. Republicans have officially taken control of both houses in Congress with John Boehner re-elected House Speaker, though not without some trouble from his right flank that had to be put down and The Washington Post has compiled these stats about your new Congress. It’s 80 percent white, 80 percent male and 92 percent of its members are Christian.

SENATE MINORITY LEADER HARRY REID (Nev.): I didn't go bull riding. I wasn't riding a motorcycle. I was exercising in my new home.

O’DONNELL: A different kind of bruising awaited John Boehner today. A small but noisy conservative rebellion of two dozen Republicans attempted to knock him out as Speaker, but in a dramatic floor vote, Boehner had more than enough support to keep the gavel.

HOUSE SPEAKER JOHN BOEHNER (Ohio): As Speaker, all I ask and, frankly, expect, is that we disagree without being disagreeable. 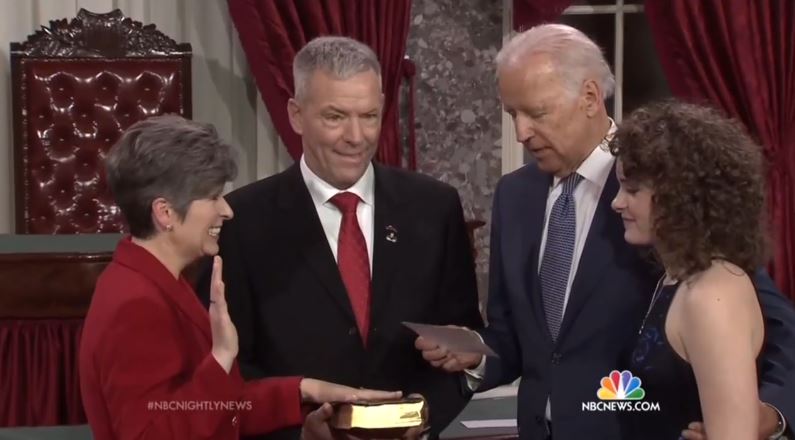 O’DONNELL: Today was all about ceremony and spectacle. The Speaker zipped back and forth to appear in hundreds of official member photos, and Vice President Joe Biden swore in the new class of Senators. In the Biden way, he hugged and mugged for Senate family selfies and even called the grandmother of Colorado Republican Cory Gardner.

O’DONNELL: Getting down to business, Republicans vowed to quickly pass the Keystone oil pipeline project that environmentalists oppose, setting up a showdown with the White House, Brian, which says the President will block that with his veto power.