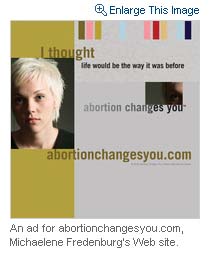 That was the message Susan Dominus conveyed in her March 26 New York Times article, "In Subway Ads on Abortion, a Pretense of Neutrality."

Dominus attacked recent ads for abortionchangesyou.com, a Web site in which anybody touched by abortion can anonymously share their feelings and learn that they are not alone. Dominus began her story by noting the innocuous nature of the advertisement, but turns on the Web site after revealing its association with Project Rachel, a Catholic initiative.

After describing the advertisement, Dominus disparaged all pro-lifers by saying, "as anti-abortion strategies go, it is relatively oblique - a far cry from a brick in the window or a death threat to a member of Congress."

Michaeline Fredenburg, founder of the site, told Dominus, "We feel it's really important for women and their families to have a safe place to experience their own range of emotions, apart from the controversy and debate" surrounding abortion.

And yet, this did not prevent Dominus from belittling the effort as "propaganda masquerading as therapy."

"The numerous grim testimonials on the site" led Dominus to conclude "it seems patently against women having abortions." But her primary complaint was the affiliation with pro-life Catholic organizations.

"Nowhere on the site does abortionchangesyou.com mention an anti-abortion agenda," Dominus noted. "But when I clicked the ‘Find Help' button and typed in a Manhattan ZIP code, the first thing that popped up was Project Rachel, an initiative of the Roman Catholic Church, to ‘present the truth of the impact and extensive damage abortion inflicts on the mother, father, extended family and society."

Dominus also quoted an attack from Cristina Page, author of "How the Pro-Choice Movement Saved America: Freedom, Politics and the War on Sex." Page said she "found the abortionchangesyou.com campaign all the more disturbing for Ms. Fredenburg's pretense of not taking sides."

But Dominus took a side, praising pro-abortion groups and forums instead. She directed readers dealing with the emotional fall-out of abortion to sites with liberal affiliations including Exhale.

According to Dominus, Exhale's site states that emotions like "happiness, sadness, empowerment, anxiety, relief or guilt are common," and noted that "of the five founders, most support abortion rights and some have had abortions."

She also promoted the Doula Project, an organization based in New York City, that Dominus said "offers free emotional support and information both to women who want to continue with their pregnancies and to those who choose to undergo an abortions." She failed to point out that both Exhale and the Doula Project link to abortion provider Planned Parenthood on their sites.

But what Dominus did not say, was that, despite her assertion that "the site seems to convince women that there's only one appropriate emotional response (to abortion), exquisite pain", there are stories on the AbortionChangesYou Web site from women who did not regret their decisions to have an abortion. Granted, there were fewer of those stories than those that depicted long-term emotional suffering, but they were present and indicated Fredenburg's forum is safe for either viewpoint.

"I have had to make the difficult decision to abort a pregnancy and although the decision was incredibly difficult and I have never forgotten the experience, I truly believe that were I not to have made that decision, my life and my family would have been negatively altered," wrote one woman.

Another woman related the depression she felt at first about her abortion, but how she no longer feels that what she "did was wrong." "I'm glad I don't have a 3-year-old running around the house right now, I'm glad I'm a university student, getting my degree and getting married to a man I don't already have children with," she elaborated. "If I'm supposed to feel guilty for that, then I'm sorry but I don't."