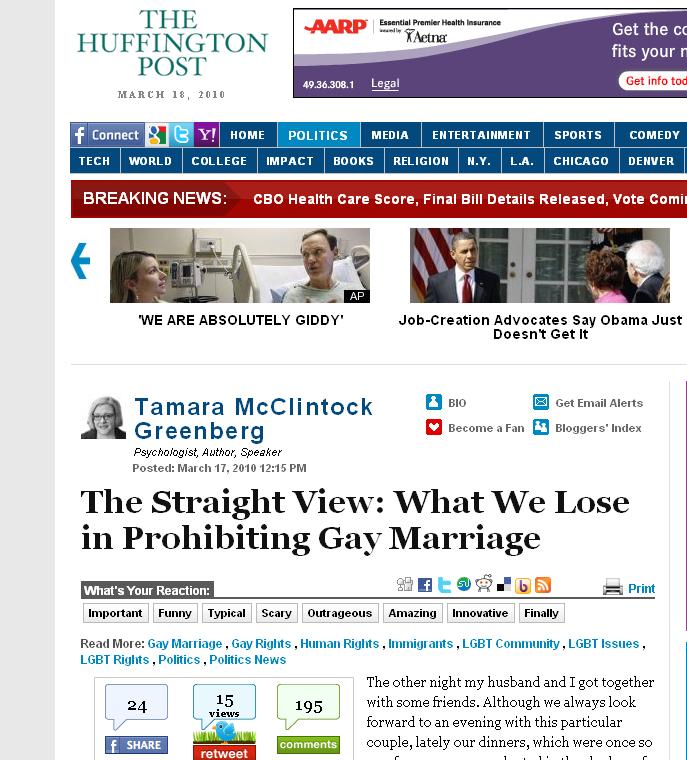 Huffington Post blogger Tamara McClintock Greenberg gave one more reason in support of same-sex marriage - without it, her friends "might be forced to leave the country."

Greenberg lamented her friends' situation: "As same-sex partners, not only do they lack the basic rights of any couple in love to marry, since one person is an immigrant on a student visa, they may have to move to another country that acknowledges gay rights and marriage."

With that unique argument out of the way, the rest of Greenberg's post was a textbook-perfect liberal screed against those standing in the way of marriage for gay and lesbian couples. She was ashamed of America and compared it to countries where atrocious human rights violations are committed everyday. She blamed Christianity for our intolerance, and argued that homosexual couples are no different than heterosexual couples.

Greenberg's wrote, "Pretending that gay partnerships are different from our own is not only false, but threatens our sense of being a dignified society." In fact, we're really no better than third-world tyrannies.

"In order to deny basic civil rights, one has to deny the humanness of the ‘other,'" she argued. "We see this all the time in countries where basic human rights are not valued and where civil war destroys communities, from the Republic of Congo to Iraq, in which one group views another as non-human and where crimes of humanity are allowed to occur."

She continued, "We have also seen this in our own country with slavery and the oppression of African Americans. When a particular group can be viewed as ‘non-human,' basic rights can easily be denied; this lack of consciousness can occur without detriment."

Greenberg did note that she does not believe barring same-sex couples from marriage is "equivalent to ethnic cleansing, tribal wars, and killing in the name of religion," but she still concluded, "that the idea of opposing gay marriage is rooted in Christian beliefs, espoused by a fraction of our diverse nation, suggests that we are not more virtuous than those countries we condemn for lacking basic human rights."

It's difficult not sympathize with Greenberg, carrying as she does The Liberal's Burden - her shame "about living, working and loving [her] husband in a country that does not allow equal rights regarding marriage." She explained that while visiting with her friends, "I felt pressured to come with an explanation for the shameful practice of not allowing our friends to marry. But U.S. polices in this regard are not rational."

Greenberg sprinkled jabs at Christians throughout her post like, "Christian religion and ideas about marriage are just as destructive as any other views that have kept people from entitled equal rights," and that "though Christian values were a part of our country's origins, such values don't quite hold water in a society in which we all reside relatively peacefully given different values and religions."

But Greenberg ignored a glaring fact about those "values" that "don't quite hold water." Voters have turned out in favor of traditional marriage - a union between one man and one woman - every single time the issue has been brought to the ballot. Obviously those "Christian values" and "ideas about marriage" still carry quite a bit of water.

As far as human rights go, the democratic process is open to American gay and lesbians. They are not jailed for simply living a lifestyle many people find immoral. Laws are in place to ensure they have the same protections and access to employment and housing opportunities as any other citizen.