A long, overheated New York Times Sunday editorial, “The Republican Party and the Scourge of Extremist Violence,” was part of the paper’s hysterical editorial series The Danger Within, condescendingly “urging readers to understand the danger of extremist violence.” (Translated from Times-speak: “Keep voting Democrat!”) 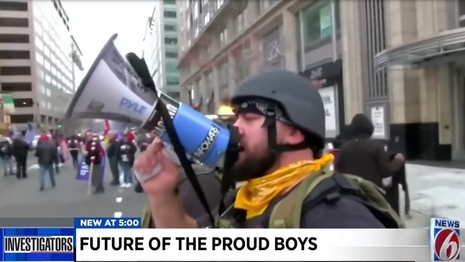 The paper extrapolated wildly from an appearance by the Proud Boys founder at a Republican club in Manhattan in 2018, after which there was a violent confrontation with left-wing protesters and some arrests.

From there the Times launched into one of its tiresome “Democracy Is At Stake” lectures and urged Republicans to purge their party, while sounding like a more-paranoid Paul Krugman column.

It has happened before. The Republican Party successfully drove the paranoid extremists of the John Birch Society out of public life in the 1960s. Party leaders could do so again for the current crop of conspiracy peddlers. Voters may do it for them, as they did in so many races in this year’s midterm elections. But this internal Republican Party struggle is important for reasons far greater than the tally in a win/loss column. A healthy democracy requires both political parties to be fully committed to the rule of law and not to entertain or even tacitly encourage violence or violent speech. A large faction of one party in our country fails that test, and that has consequences for all of us.

Meanwhile, they ignored the violent rioting at Black Lives Matters rallies over the summer of 2020, which the Left tacitly encouraged as a "reckoning."  Somehow only Republicans wake up and choose violence.

Own a gun? You too may be part of the conspiracy!

It is impossible to fully untangle the relationship between conspiracy theories and violence. But what Americans do know should sound alarms: A survey this year found that some 18 million Americans believe that the 2020 election was stolen from Donald Trump and that force is justified to return him to power. Of those 18 million, eight million own guns, and one million either belong to a paramilitary group or know someone who does. That’s alarming because violent people who belong to communities, online or offline, where violence is widely accepted are more likely to act. A portion of the G.O.P. has become such a community.

….In a speech in September, President Biden did his part, when he identified the threat that the dominance of specifically “MAGA Republicans” poses not just to the Democratic Party but to the entire country….

Again the Times tried to extrapolate standard Republican rhetoric as “speech that has been linked to violence,” no actual evidence of Republican responsibility needed.

….They depicted gay and transgender people as “groomers”; they helped spread the racist so-called great replacement theory that has inspired numerous mass shootings; they promoted the QAnon conspiracy theory, not to mention ubiquitous lies about fraud and the 2020 election, which led to the Jan. 6 attack.

Even the perfectly sound democratic ritual of Republican primary voters in Wyoming voting out Rep. Liz Cheney, who had pretty much ignored her constituency while pursuing the white whale of Donald Trump, was somehow an example of Trump’s “brand of authoritarianism.”

Two prominent Republicans who have been outspoken about right-wing extremism and baseless lies, Representatives Liz Cheney and Adam Kinzinger, have been driven out of office. Meanwhile, the spread of conspiracy theories that have already inspired violence continues unabated from politicians and conservative media.