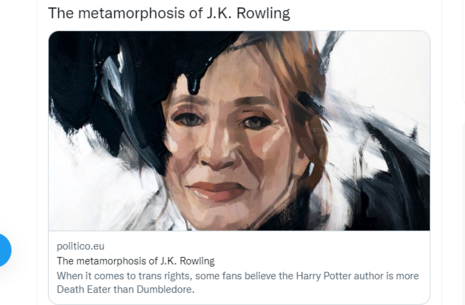 For the crime of believing in human biology and that women are women, Harry Potter author J.K. Rowling has been excoriated by the left and their media allies.

Now it’s Politico’s turn. Journalist Sarah Wheaton’s 5,000-word cover story for the European edition of Politico, “The metamorphosis of J.K. Rowling – When it comes to trans rights, some fans believe the Harry Potter author is more Death Eater than Dumbledore.”

In other words, Rowling is a real-world villain. Why not just call her Voldemort?  Spoiler alert: They were saving that clever slam for later.

When it comes to J.K. Rowling, even some of the children’s author’s biggest fans are finding it increasingly necessary to separate the work from the creator.

Wheaton seemed perturbed that Rowling wasn’t suffering guilt or fear for her outspokenness and the resulting abuse.

….If anything, as the criticism has mounted, Rowling has only become more combative, cheerfully retweeting her detractors to trigger pile-ons from fellow thinkers.

Rowling, who has received many death threats, is accused in classic liberal fashion of “punching down.” Rowling is even quoted saying she’s received “so many death threats I could paper my house with them.” But Wheaton followed through on only one example and actually sympathized with the Twitter user who issued the threat.

Rowling’s interactions that day also foreshadowed another aspect that would become apparent as she engaged with her online opponents: a willingness to use the power of her platform against relatively powerless detractors. By directing her then-8 million followers toward “fairly anodyne critics,” Rowling “behaved irresponsibly,” Guardian columnist Ellie Mae O’Hagan wrote in 2016.

Rowling objected to an article headlined “Creating a more equal post-COVID-19 world for people who menstruate,” an ignorant headline that erased women, but one which Wheaton defended as “an example of language intended to be an inclusive catchall for both biological women and trans men.” That’s a premise a century of feminism would reject.

“‘People who menstruate,’” Rowling mused. “I’m sure there used to be a word for those people. Someone help me out. Wumben? Wimpund? Woomud?”

Wheaton at least let Rowling explain her concern about the “huge explosion in young women wishing to transition and the increasing numbers who seem to be detransitioning.” Still, she wasn’t forgiving.

For those on the other side of the debate, what [gender-critical feminist Suzanne] Moore describes as “steel” can very often look like cruelty. While Rowling’s critics haven’t held back in their attacks, the Harry Potter author hasn’t hesitated from responding in kind -- at least when it involves punching down.

Wheaton then came to the video threatening to put Rowling “in a hearse” -- and blamed the victim, Rowling.

However, in April, Rowling responded to an amateur music video with lyrics “J.K. hope you fit in a hearse” by tweeting a public complaint -- eliciting a howl of protest from the original poster (whose video was taken down by Twitter).

“The most powerful TERF in the world (billionaire, lives in castle, 14.1M followers) sent a mob after me (broke, lives with mom, 1.1k followers),” tweeted Faye Fadem, the bedroom producer behind the video and a trans woman….

She ended with a “drag king” named Francisca Escobar who compared Rowling to Voldemort, after the author’s signature villain: "Hey, are you Voldemort, or what?" 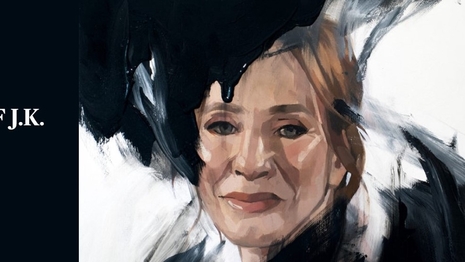 The article concluded with an astonishing explainer from “trans woman” cover artist Cat Graffam, bragging about how she made Rowling’s photo look threatening.

….I composed a black mass that envelops her from all sides, creating a sense that she is being overwhelmed by darkness. Trans people in the United States and the United Kingdom are seeing an escalating assault on our rights, and Rowling’s rhetoric and that of those who side with her are causing genuine harm….