The New York Times’ hostility toward Florida’s Republican Gov. Ron DeSantis, a potential presidential candidate in 2024, was on sorry display in a news story over the second attempt by the left to (literally) cancel a DeSantis speech at a Jewish conference in New York City. 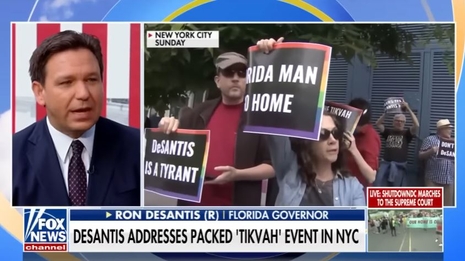 For the second time this spring, a New York City institution is facing a backlash over a conservative Jewish conference, long in the planning, because of one of its featured speakers: Gov. Ron DeSantis of Florida.

In May, the Museum of Jewish Heritage backed out of a tentative rental agreement to host the event. Now, Chelsea Piers, a recreation complex with a large event space at its Manhattan location and which hosted the conference on Sunday, is being widely criticized by elected officials and activist groups who say that Mr. DeSantis should not have spoken at a site that has played an important role in New York’s L.G.B.T.Q. history.

Earlier this year, Mr. DeSantis signed legislation that prohibited classroom discussion of gender identity and sexual orientation for some age groups in Florida schools, known by opponents as the “Don’t Say Gay” bill.

The event, the Jewish Leadership Conference, was organized by the Tikvah Fund, a conservative Jewish organization, which said it invited Mr. DeSantis to deliver a speech about the vibrancy of Jewish life in Florida.

The Museum of Jewish Heritage pulled out upon learning DeSantis would speak.

Now, facing the threat of boycotts and protests outside the event on Sunday, the recreation complex finds itself at the center of a pitched dispute that touches on issues of identity, inclusivity, religion and free speech. And it has left Chelsea Piers in a quandary that is in many ways emblematic of the tense -- and intensely political -- national conversation around whether people with views that some consider abhorrent or dangerous should be given a platform.

“The bottom line is Chelsea Piers is providing a venue to propagate hate toward the L.G.B.T.Q. community and that is unacceptable on many levels, including that it is Pride and that it is in Chelsea, the heart of the community,” said State Senator Brad Hoylman, the Manhattan Democrat who represents the area. He helped lead calls for Chelsea Piers to cancel the event….

Chelsea Piers said that it would not cancel the event but would donate the money from the event to “groups that protect L.G.B.T.Q.+ communities.” Of course, that didn’t work: “The decision by Chelsea Piers to donate money to L.G.B.T.Q. groups has not mollified critics….”

Stack glossed over the cancel-culture vibes while warning “Other groups are canceling upcoming events at Chelsea Piers." One was (gasp!) the New York City Gay Hockey Association.

Stack gave the campaign a paragraph of rebuttal, while giving a conga line of enraged would-be censors ample space and the final word. Just like his journalism on "transphobic" author J.K. Rowling.

Stack’s religion reporting has been shaky. In 2016 he notoriously twisted an objective religion study to mock Christians as “less educated” than practitioners of other religions, though the gap was wholly explained by U.S. policy that favored highly educated immigrants. The bizarre headline: “Christians in U.S. Are Less Educated Than Religious Minorities, Report Says.” The Federalist’s John Daniel Davidson wrote: “The primary purpose of its coverage is to convey the idea that Christians in America are uneducated rubes.”