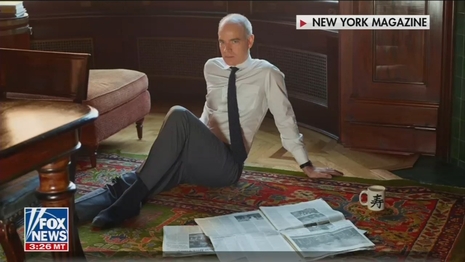 If you didn't know from his creepy and suggestive pose in a photo shoot for New York magazine, Joseph Kahn is the new executive editor of the New York Times, replacing current editor Dean Baquet, who is retiring. Kahn was the paper’s Beijing bureau chief in the 2000s, and won two Pulitzers for his reporting there. He has served as Managing Editor since 2016.

Times media reporters Michael Grynbaum and Jim Windolf outlined what Kahn was getting into, but left out some of the paper’s unflattering recent history. Coverage of Baquet’s tenure cartoonishly avoided the paper’s left-wing woke meltdowns of recent years and even suggested the paper was annoying liberals:

An award-winning podcast, “Caliphate,” was found to have fallen well short of the paper’s journalistic standards. In 2021, the reporter Donald G. McNeil Jr. left under pressure after complaints about his use of a racist slur during a Times-sponsored trip for high school students. Newsroom employees called for a more aggressive commitment to diversifying the staff. The newspaper, traditionally accused of bias by some conservatives, faced criticism from some liberals about its coverage.

Both of those incidents were mentioned in the actual New York magazine profile of Kahn by Shawn McCreesh, who worked at the paper for four years as clerk for columnist Maureen Dowd. McCreesh was rather tough on his former employer and its leftward shift (unlike the bizarre suggestion in the Times's own story that the paper had drifted rightward).

McCreesh even used French Revolution and Maoist metaphors to describe the paper’s staff, and included a fuller account of the travesty over the firing of Donald McNeil -- because who needs a veteran science reporter during a worldwide pandemic.

The tumbrels didn’t stop there. Last year, longtime science writer Donald McNeil was pushed out for an incident that had occurred years prior in which he quoted the N-word while discussing an anecdote on a camping trip with a bunch of rich kids on a field trip to South America sponsored by the Times….The right-wing media and enemies of the Times everywhere were gleeful at the never-ending spectacle. The place kept spitting people out, and all the important journalism seemed to be the last thing anyone was focused on. Roving subgroups of freaked-out news reporters and columnists had banded together and were emailing Sulzberger, begging him to get a grip.

Around this time, someone who had studied in China remarked how similar it all seemed to a Maoist struggle session. Did it ever resonate with Kahn that way?

(Kahn answered in the negative.)

She even torched The Times’s soft Hunter Biden coverage:

The paper has been dragged leftward by its liberal staff and subscriber base. It drew a fresh round of criticism recently after reporting in the 24th paragraph of a news story how it “authenticated” a cache of emails from Hunter Biden’s laptop. (It all seemed a little rich for the Times to be authenticating something everyone always knew was real, more than a year after barely touching the story at election time.)….

Near the end, Kahn defended the quest for “objectivity” in journalism, waxing poetic about how “the journalistic process needs to be objective and transparent, and we need to challenge ourselves and our readers to understand all the facts and explore a wider range of perspectives.”