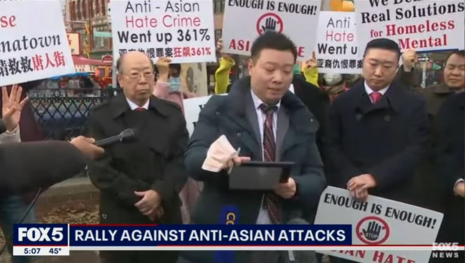 Instead, Donald Trump was blamed. Reporters Jeffery Mays, Dana Rubinstein and Grace Ashford deflected from the obvious racial angle to the killings in their evasive piece Monday, instead blaming reliable Donald Trump, who was out of office for many months when the assaults occurred.

She was attacked as she swept up in front of her Queens home in November, beaten in the head with a rock so viciously that she was in a coma for weeks.

As GuiYing Ma battled for her life, other attacks on Asian women followed. A mentally ill man pushed Michelle Alyssa Go to her death at Times Square subway station in January. The next month, Christina Yuna Lee was followed to her apartment in Chinatown and fatally stabbed more than 40 times.

After each instance, Asian American groups and elected officials from across the political spectrum came out in force, demanding that more be done to address violence against members of their community.

But when it comes to strategies for fighting crime against Asians, unity has been much harder to find.

The Times reported that younger liberals have argued “against tougher policing and endorsing more progressive measures to address mental illness and homelessness.” Politically correct as always, the paper didn’t identify the race of the individual killers.

The violence is part of an increasing trend. In 2020, the New York Police Department reported 28 bias incidents against Asians and made 23 arrests. In 2021, the police made 58 arrests and recorded 131 incidents -- including the death on Dec. 31 of Yao Pan Ma, a Chinese immigrant who was attacked while collecting cans in East Harlem last year.

The reporters allowed some pungent pushback from a member of a local Chinese group.

“We don’t care about your social experiment,” Mr. Yu said. “We need our safety back.”

The story went off on an odd tangent about “the oversexualization of Asian women,” before launching into knee-jerk anti-Trump idiocy.

The pandemic, too, is viewed as a driver of the uptick in attacks against Asian Americans; the coronavirus originated in China, and some, including former President Donald J. Trump, blamed the Chinese for the virus’s spread.

“I’m not going to let Donald Trump off the hook for the drastic increase in incidents that happened literally weeks after he began using words like ‘kung flu’ and ‘Chinese virus,’” said Representative Grace Meng, a Queens Democrat who in 2012 became the first Asian American elected to Congress from New York.

News update: Donald Trump left office 14 months ago. Yet the Times would prefer to somehow blame his old rhetoric for the killings of Asians in New York City today, rather than the actual killers who committed the actual crimes.

What most Asian Americans leaders seem to publicly agree on is denouncing the impulse to view the crimes as a Black-on-Asian pattern. Racial divisions and stereotypes can “strain the community relationships that have been built,” said Vanessa Leung, who is co-executive director of the Coalition for Asian American Children and Families.

It’s odd for the reporters to finally raise the racial angle at the end, since they were pathetically careful to avoid saying “black” the entire piece, even though two of the killings they mentioned were committed by African-Americans with suspected mental health problems.

Of course, the Times avoided mentioning the disproportionate number of blacks that instigated “hate crimes” against Asians, though the numbers are readily available.