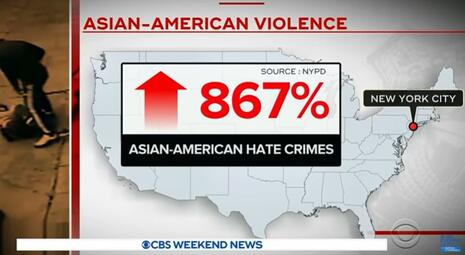 How lame can The New York Times be in addressing the recent spate of black-on-Asian hate crimes? Pretty lame. Take their Monday story, headlined “In Fight Against Violence, Asian and Black Activists Struggle to Agree,” by Kellen Browning and Brian X. Chen, reporting from Oakland. They burned off 1,500 words about racial activists' failure to communicate instead of addressing hate crimes head-on.

This spring, Black political leaders and civil rights activists delivered a message to Asian Americans: We stand with you.

Yet “the results of that pledge are hard to find.” Why? The left-wing drive to “defund the police” was the sticking point, although that politically toxic phrase was only used once, in a quote.

…the tensions boiled down to one main disagreement: policing. While Black Lives Matter activists have called for reducing police budgets and decreasing cities’ reliance on law enforcement officers, Asian leaders say that police are crucial to preventing attacks.

They evaded the elephant in the room.

The contrasting attitudes underline how drastically the relationship with law enforcement can differ depending on race. Black Americans have been disproportionately killed by the police, while Asian Americans are among the least likely to be harmed in police encounters, according to multiple studies.

Hate crimes against Asian people rose 73 percent in 2020, according to the F.B.I. The police killed 192 Black people in the United States this year, compared with 249 last year, according to data from the Mapping Police Violence research and advocacy project.

So who committed those hate crimes against Asians? The Times neatly avoided mentioning the disproportionate number of blacks that instigated “hate crimes” against Asians, though the numbers are readily available in the same place the paper found its other data. How can one write about black and Asian relations without mentioning those statistics?

The reporters passed on without condemnation or comment the anti-police radicalism from black-led anti-police groups.

In August, Carl Chan, the president of the Chinatown Chamber of Commerce in Oakland, urged Gov. Gavin Newsom to deploy California Highway Patrol members on city streets so that local officers could spend more time patrolling neighborhoods like Chinatown.

But Cat Brooks, the co-founder of the Anti-Police Terror Project, a Black-led group, said adding more officers created a “totally oppressive environment” that was dangerous for people of color.

“For Carl Chan to be able to call in the wrath of agencies that have historically brutalized Black and brown communities is terrifying,” she said, adding that many Asian progressive groups agreed with her.

And equating Korean store owners “wrangling” with “poorer Black residents” in Los Angeles to Korean-owned businesses being “looted and burned” by black rioters is an offensively asymmetrical comparison. Yet the Times seems to think they’re equivalent, tucking both examples under the euphemism of “clashes.”

…there have been clashes. In the 1990s, Korean business owners in South Central Los Angeles wrangled with the poorer Black residents in the area. Tensions there peaked in 1992, after four police officers who had beaten Rodney King were acquitted, leading to riots. More than 2,300 Korean-owned business were looted and burned.

While the Times avoids directly addressing black-on-Asian violence, even hinting at blaming the Asian victims for being too financially successful, the outlet eagerly spotlights instances of unproven hate crimes by whites against Asians. It's a gross double standard.