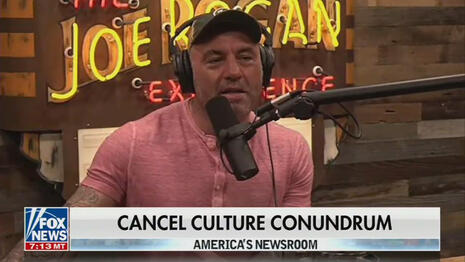 New York Times tech reporter-columnist Kevin Roose took on the controversy between hugely popular podcaster-interviewer Joe Rogan and the music-media streaming provider Spotify over supposed misinformation Rogan spread about Covid vaccines in an interview with a controversial doctor. The story dominated the front of Tuesday’s Business section: “Staying Power Of an Uproar.”

It wasn’t hard to spot Roose was setting Rogan up for a fall. His jittery fear of conservative “misinformation” online has only increased during the COVID era and the Black Lives Matter riots:

Stop me if you’ve heard this one before:

A popular internet personality, beloved by millions for his irreverent, anti-establishment commentary, becomes the subject of a heated backlash after critics accuse him of promoting dangerous misinformation.

The controversy engulfs the creator’s biggest platform, which has rules prohibiting dangerous misinformation and now faces pressure to enforce them against one of its highest-profile users.

….the backlash intensifies. Civil rights groups organize a boycott. Advertisers pull their campaigns. A hashtag trends. The platform’s employees threaten to walk out. Days later, the chief executive is forced to choose between barring a popular creator -- and face the fury of his fans -- or being seen as a hypocrite and an enabler of dangerous behavior.

How many times can Roose accuse Rogan of dangerous misinformation without quite saying so?

Now, it’s Spotify’s turn. The audio giant has faced calls for weeks to take action against Joe Rogan, the mega-popular podcast host, after Mr. Rogan was accused of promoting Covid-19 misinformation on his show, including hosting a guest who had been barred by Twitter for spreading false information about Covid-19 vaccines. This month, a group of hundreds of medical experts urged Spotify to crack down on Covid-19 misinformation, saying Mr. Rogan had a “concerning history” of promoting falsehoods about the virus.

Roose marshalled methods to attack Rogan under the guise of reporting:

After arguing that Spotify’s exclusive rights to Rogan’s show “gives the company more responsibility for his show than others it carries,” he pivoted to the threat of music stars withdrawing their hits: “…in theory, musicians with enough firepower could force change simply by threatening to remove their albums. (As a viral tweet last week put it: “Taylor Swift could end Joe Rogan with a single tweet at Spotify.”)…”

So, how will Mr. Rogan’s backlash cycle end? It’s hard to say.

It’s clear how Roose wants it to end, given his obsession with “misinformation.” As if Rogan is purposely spreading lies (and who decides what is “misinformation” on Covid anyway?), as opposed to drawing out controversial figures in interviews.

The reporter was certainly casual about people he doesn’t like, even presidents, being permanently banned from online public spaces:

One possibility is that it will end like those of Mr. Jones and Mr. Trump, whose behavior was so outrageous (and who continued to flagrantly violate the rule even after being called out) that Twitter and Facebook had no real choice but to shut them down permanently.

Roose doesn’t think it’s going to “simply fizzle out…given that boycotts have already begun and appear to be snowballing.” He ended with this encouragement to the ban-Rogan brigade:

Spotify may think it’s gotten past the worst of the Rogan backlash. But we know from recent history that what looks like the end of a content moderation controversy is often just the warm-up act.

Roose has been a long-time foe of conservative speech online and seems to lack both a sense of proportion and a sense of humor. He even finds the Christian satire site Babylon Bee “misinformation.”