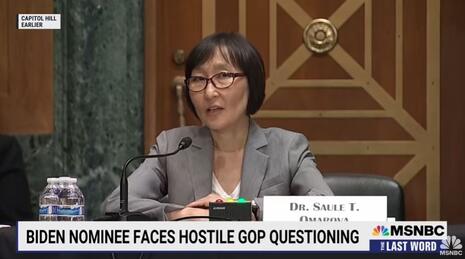 Even in defeat, the New York Times coverage of the Biden Administration’s nomination of Saule Omarova for Comptroller of the Currency (which charters, regulates, and supervises national banks) whitewashed the nominee’s radicalism.

Omarova withdrew from consideration in the face of opposition from the banking industry, as well as moderate Democrats and all Republicans. Her admiration of aspects of her native land, the totalitarian USSR, and her ideas about federalizing bank accounts were virtually ignored in the Times coverage, which preferred knee-jerk insinuations of “McCarthyism” against a native of the Soviet Union.

Saule Omarova, a Cornell Law School professor whom critics painted as a communist after President Biden picked her for a key banking regulator job, withdrew from consideration for the post on Tuesday.

Some lobbyists, including the incoming chairman of a group representing community bankers and the chief executive of another group that focuses on big banks, also shared a Wall Street Journal editorial suggesting that Ms. Omarova’s Soviet childhood meant that she could not be trusted.

The Times failed to mention the nominee’s appearance at a “social wealth seminar” in 2021 when she said: “What I'm thinking about primarily is primarily the coal industry and the oil and gas industry. A lot of the smaller players in that industry are going to probably go bankrupt in short order. At least we want them to go bankrupt if we want to tackle climate change, right?”

Flitter skipped that in 2019, the nominee bragged that the USSR (a murderous regime) at least had no “gender pay gap.” She wrote her graduate thesis (at Moscow State University) on “Karl Marx’s Economic Analysis and the Theory of Revolution in The Capital," and mysteriously, the only copy has disappeared. The reporter instead focused on the Democratic talking point of painting Republicans as intolerant practitioners of neo-McCarthyism.

There was much more to the opposition than ethnocentrism, no matter how Flitter characterized it.

Republicans in Congress mimicked the lobbyists’ criticisms, saying Ms. Omarova’s academic work and her Soviet origins should disqualify her. In an exchange that drew gasps from Democrats during Ms. Omarova’s hearing before the Senate Banking Committee on Nov. 18, Senator John Kennedy, Republican of Louisiana, demanded to know whether Ms. Omarova had ever resigned from a communist youth group that Soviet children were forced to join, adding, “I don’t know whether to call you ‘professor’ or ‘comrade.’”

“In a relentless smear campaign reminiscent of red scare McCarthyism, they have shamefully attacked her family, her heritage and her commitment to American ideals,” [Dem. Sen. Sherrod Brown] said.

Flitter's story from the hearings continued to push the two-bit McCarthyism implications allegedly being sown by Republican senators.

Ms. Omarova, President Biden’s pick to lead the Office of the Comptroller of the Currency, has faced steep opposition from industry groups and Republican lawmakers, with critics at times suggesting that her birthplace -- the former Soviet republic of Kazakhstan -- and her education in Moscow were reason to be suspicious of her.

Again, Flitter is leaving a lot out, while whitewashing the radical nature of Omarova’s ideas.

In her testimony, Ms. Omarova said that her writings were intended to be “part of an ongoing academic debate” and that it was not right for readers of her work to assume she was endorsing every idea she explored….

This is the same newspaper that whipped on Jeff Sessions before his confirmation as Attorney General in 2017 as a radical wrecker of civil rights, a man who "speaks to a disenchanted electorate that includes the white, nationalistic fringes of his party....Mr. Sessions’s views have made him a target of critics who say he works too closely with people who have racist, xenophobic views."