New York Times: John Kerry’s ‘Pitch to Save the Planet’ After the ‘Damaging’ Trump 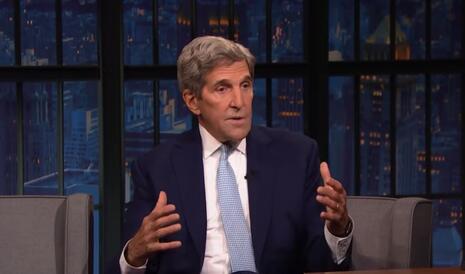 After fawning over "movie star" Dr. Fauci, the New York Times has issued another utterly obsequious profile of a liberal hero: John Kerry.

Times reporter Lisa Friedman -- the definition of a reporter on the "climate beat" who is just as devoutly "pro-planet" as the left -- treated the failed Democrat presidential candidate turned climate scold as an environmental savior on Thursday under the headline “Kerry Hits the Road With U.S. Sales Pitch To Save the Planet.”

The text box painted the long odds against him thanks to Donald Trump: “A tough task after the previous president’s go-it-alone approach.”

Kerry is Biden’s “special climate envoy,” and is still burning up the miles flying internationally to stop climate change, while probably burning more fossil fuel than we do in a lifetime.

The lanky figure lugging a green Orvis carry-on was instantly recognizable as he paused on the jetway after his overnight flight from the United States.

“Mr. Kerry,” waved a fellow passenger. “Are you here to save the climate?”

John Kerry, the former United States senator and secretary of state, is now a kind of pedigreed traveling salesman for the environment, shuttling from country to country, with an urgent pitch to save the planet.

He’s visited 14 countries in nine months, some of them more than once. He flies commercial these days and, at 77, the travel is tiring. But President Biden’s special climate envoy is under mounting pressure.

With just 40 days before leaders from around the world gather in Glasgow, Scotland, for a pivotal United Nations climate summit, Mr. Kerry needs to convince other countries to commit to sharply turn away in this decade from burning coal, oil and gas and cut the resulting carbon emissions, which are heating the planet to dangerous levels.

His sales approach is simple. “We’ve got to do what the science tells us to do,” he said.

But his task is enormous…

"Enormous" -- after the damage President Trump did to American credibility. Friedman allowed Republican Sen. John Barrasso of Wyoming to call Kerry a “disaster” and to warn that Kerry’s approach risked economic ruin. That was it for critics.

She quoted the impossibly er, "ambitious" Paris accords, then said that's not enough (what is?)

....a new analysis released last week by the United Nations found that the Paris commitment is insufficient; even if countries carry through on the promises they made in 2015, the global average temperature will rise 2.7 degrees Celsius above preindustrial levels by century’s end. “The world is on a catastrophic pathway,” United Nations Secretary General António Guterres said.

Kerry sounds like a nightmare boss, though of course that's not the paper's spin. 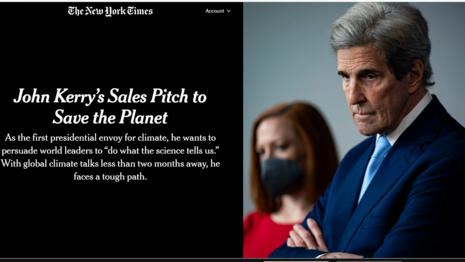 Aides say he is focused on details, texting his staff late into the night to seek a country’s solar capacity statistics or economic data or with more obscure questions, like Mr. Modi’s stated spiritual connection to environmental issues.

Retirement never suited Kerry, who wants to be in the arena, said Thomas Vallely, a longtime friend who is a senior adviser for Mainland Southeast Asia at Harvard University’s Ash Center. “This is like bullfighting. He’s addicted.”

Upon his return to government, Mr. Kerry said he found that the Trump years damaged America’s credibility, saying it “was chewed up and spat out” after Mr. Trump’s decision to withdraw from the Paris agreement.

“You know, right now, everything’s a question mark,” Mr. Kerry said. But, he added, “I think the world is coming around.”