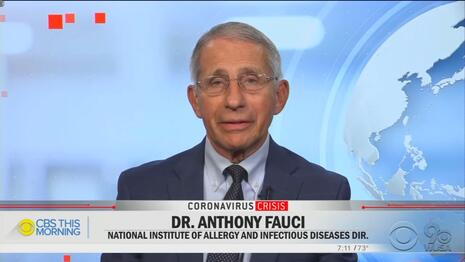 The New York Times’ Sheryl Gay Stolberg made a rare appearance in the Arts section in Thursday’s edition with a worshipful profile of liberalism's current reigning icon of science and reason, Dr. Anthony Fauci, upon the release of a hagiographic documentary, Fauci.

It was not quite noon on a sunny Saturday in Washington, and Dr. Anthony S. Fauci, the renowned infectious disease specialist and top medical adviser to President Biden, was worried about what shirt to wear.

He had just wrapped up a White House call, his third Zoom of the day. He popped out onto his back deck in jeans and a red T-shirt under a long sleeved blue crew neck, wondering aloud if he should change. The last time he had been photographed at home, in sunglasses beside his backyard pool, he said, he faced “a firestorm of the crazy far right” accusing him of “trying to be a movie star.”

Now Dr. Fauci -- arguably the nation’s most famous, and suddenly most polarizing doctor -- is a movie star, in a manner of speaking. A new documentary titled, simply, “Fauci,” had a limited run this month in 11 cities (in theaters that required proof of vaccinations and masks) and will begin streaming in early October on Disney+.

“Fauci,” the movie is, for the most part, a lot like Fauci the man: straightforward and no nonsense….

He did not mince words about the “extreme far right QAnon jerks” who have threatened him and his family….

This was a surprise: The paper’s chief Covid reporter, Apoorva Mandavilli, whose reporting tends toward the alarmist, was actually one of the few voices of dissent featured in the documentary.

The lone critical voice among those interviewed comes from Apoorva Mandavilli, a science reporter for The New York Times who writes about the coronavirus and who suggests Dr. Fauci’s conservative critics may have a point when they accuse him of flip-flopping by initially advising the public not to wear masks, and later reversing himself. (Dr. Fauci says he did so because masks were in short supply at the time, and evidence that they curbed the spread of the disease did not come until later.)

When the pandemic hit, Dr. Fauci’s likeness was suddenly everywhere -- on socks, coffee mugs, prayer candles, cupcakes. His fans tried to nominate him to be People magazine’s 2020 “Sexiest Man Alive.” Only later would the downside of stardom emerge.

Few people navigate Washington’s nexus of media, science, policy and politics as artfully as Dr. Fauci. Having advised seven presidents, he is equally at home on the set of “Meet the Press” or the star-studded White House Correspondent’s Dinner, as he is in the lab. Mr. Bush notes in the movie that Dr. Fauci is “not a politician.”

The Times' tweet publicizing the story was even more embarrassing.

“Fauci,” a new documentary, follows the renowned infectious disease specialist's work in two health crises: AIDS and the coronavirus pandemic. Dr. Fauci agreed to participate as long as it didn’t interfere with his work.

As if Fauci isn’t always interfering with his own work through his constant appearances on television.