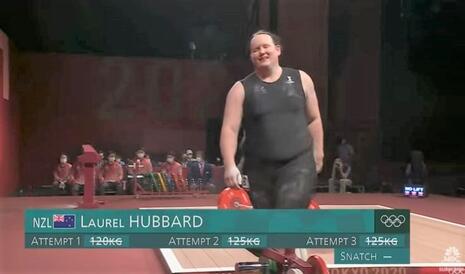 Laurel Hubbard, a biologically male weightlifter who represented New Zealand in the female weight lifting category at the Tokyo Olympics (depriving an actual female, Roviel Detenamo, of a spot) was glorified on the front of the New York Times sports section Tuesday: “No Medal, No Matter: Competing Was No. 1.”

Although Hubbard came in last after failing to complete any of "his" three lift attempts and having to withdraw from competition, reporters Ken Belson and Tariq Panja did some heavy lifting on Hubbard’s behalf, claiming the biological man actually made history while actually accomplishing nothing, and dutifully insisting that Hubbard was a “her.”

A niche sport in the best of times, weight lifting has in recent years often made news for the wrong reasons, including doping scandals and widespread corruption.

On Monday, it made news for an entirely different reason: Laurel Hubbard, a weight lifter from New Zealand, became the first openly transgender woman to participate in the Olympics. She failed to complete a lift in the first half of the competition and bowed out of the second half, leaving as quietly as she arrived.

The reporters briefly recognized that “some advocates for women’s sports, fair-sport campaigners and some athletes have questioned whether she has an unfair advantage.” Then on to the soft soap.

Against her will and out of sight, she remained a spectacle in Tokyo….

Hubbard stopped weight lifting in her 20s because, she told an interviewer, “it just became too much to bear” as she struggled to cope with her identity. She resumed competing in 2012, five years after she transitioned. When she won three titles in 2017, her performances triggered a firestorm on social media.

That would be three titles while competing in the female category.

Panja followed up with a disingenuously headlined story, “A Lifter Had Her Moment. Now She Wants Her Privacy.” Is talking to the New York Times the best way to achieve that?

Laurel Hubbard fulfilled a lifelong dream by taking part in the Olympic weight lifting competition. She also found the whole experience excruciating, an ordeal that the 43-year-old Hubbard said Tuesday she was glad was over.

Hubbard was catapulted to worldwide acclaim simply by being present at the Tokyo Games. As the first openly transgender female to participate in the Olympics, Hubbard, who for years has intensely guarded her privacy, received the type of attention usually reserved for the Games’ biggest names, towering sporting figures like the gymnast Simone Biles and the Japanese tennis star Naomi Osaka.

Panja offered nothing but sympathy to Hubbard, who faced no questions about depriving a female of an Olympic dream.

Since her place at the Olympics was confirmed, Hubbard has found herself at the center of a global conversation, a lightning rod for a deeply polarizing debate over gender, inclusivity and fairness in sports. By participating in the weight lifting competition, Hubbard became the history maker, a title that weighs heavy on a woman who says she wants nothing more than to disappear back into obscurity in her native New Zealand.

Because when you really want to disappear, the first thing you do is talk to the New York Times.

But to Hubbard -- the reluctant history maker -- her trip to the Games has only ever been about sports.

Yet more crazed insistence that Hubbard just wants to be left alone (with journalists?).

And with that, she was gone. She was headed back to New Zealand immediately, she said, retreating into the privacy she cherishes with one wish: that her achievements will be surpassed by the athletes that follow her.