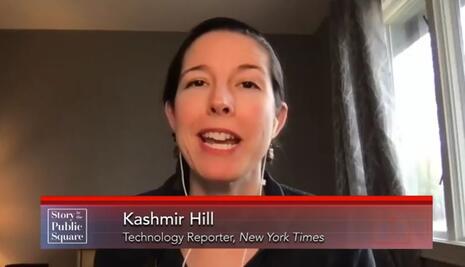 Tech reporter Kashmir Hill made the front of the New York Times Sunday Business section with a long, out-of-nowhere story purportedly about the dangers of global surveillance technology, lamenting that for an arsonist accused of setting a fire in a school and other spots during the riots in Minneapolis, “2,000 Miles Was Not Far Enough” to escape surveillance. The text box summarized mildly: “In the aftermath of the killing of George Floyd, someone set a fire at a Goodwill in St. Paul. That led to an arrest in Mexico and exposed a growing system of global surveillance.”

While leftists have no qualms about going through Capitol Hill security footage and turning in familiar faces to the FBI, when arsonists in the service of a left-wing cause are targeted with video surveillance by the ATF, it suddenly becomes disturbing to the New York Times.

A local headline from the Minneapolis Star-Tribune was less forgiving: “Rochester couple suspected in torching of St. Paul school, stores during civil unrest are caught in Mexico.” The school serves disadvantaged youth, a detail the Times skipped.

The ATF requested Mexico use the country’s facial recognition software (from China) to help track down riot arsonist Jose Felan and his helper, wife Mena Yousif. And the Times devoted 3,500 words to worrying about the alleged arsonist couple’s freedom from not being tracked.

The couple had driven an hour north from Rochester to Minneapolis to join a crowd down the street from the State Capitol. It was three days after George Floyd had been killed by a white police officer; the couple was part of a growing protest movement that would send people into the streets across America to express their anger, frustration and pain over Mr. Floyd’s death.

She noted mildly that “Mr. Felan, 34, had bounced between Texas and Minnesota for most of his life, and had run afoul of the law in both places.”

Felan was seen “carrying a thin white bag, sheer enough that, according to a criminal complaint, three canisters of diesel fuel were visible inside after he walked into a Napa Auto Parts store on University Avenue in St. Paul.” He and his wife next entered a Goodwill, “where Mr. Felan allegedly took one of the diesel fuel canisters out of his bag, poured its contents onto a stack of cardboard boxes, and set them on fire.”

In other words, a strong case.

Federal authorities assert that Mr. Felan also helped set fires at a school across the street and at a gas station, which were among over 1,500 buildings damaged that week. The surveillance footage from that day set off a nearly yearlong, international manhunt for the couple, involving multiple federal agencies and Mexican police. The pursuit also involved a facial recognition system made by a Chinese company that has been blacklisted by the U.S. government.

The reporter sympathized with those sympathizing with the vandals and arsonists:

….To prosecutors, the pursuit of Mr. Felan, who was charged with arson, and Ms. Yousif, who was charged with helping him flee, was a routine response to a case of property destruction. To fellow protesters, it’s part of an extreme crackdown on those who most fervently demonstrated against America’s criminal justice system.

“They were anti-racist protesters and not being searched for ‘terrorism’ in the U.S. but for acts of vandalism,” Mr. Villoro said. He was disturbed to see the technology being used that way, and mentioned it in his article….Part of what bothered Mr. Villoro was that the company that made the surveillance system, Dahua, had been blacklisted by the U.S. government in 2019.

After all that, the ATF found the couple the old-fashioned way.

The cutting-edge system was in use, searching for signs of the couple in Mexico, but it does not appear to be what led authorities to them. A spokeswoman for the ATF said the agency paid the $20,000 to someone who had information on the couple….

In this case, U.S. citizens were subject to a real-time tracking system that the U.S. government itself had deemed abusive in China.

Hill showed the same double standard in her May 2021 story on cancel culture, uncovering two Democratic victims while conveniently leaving out myriad examples of  “cancellation” of conservatives.