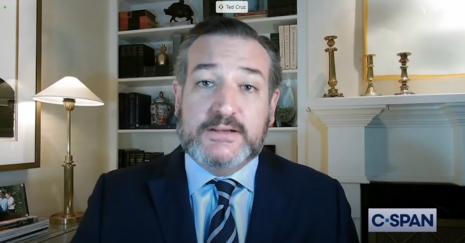 Frank Bruni’s last column for the New York Times (he’ll continue writing a newsletter) sported the provocative title, “Ted Cruz, Did I Do You Wrong?”

The former White House correspondent (covering George W. Bush) turned liberal columnist offered an apology to a rather unlikely recipient, while offering his concerns about the state of the anti-Trump press today.

I owe Ted Cruz an apology.

Though, really, it’s readers to whom I should say I’m sorry.

One day in 2015 when I had a column due in hours and couldn’t settle on a topic, I took the easy route of unloading on Cruz, who was one of many unappealing contenders for the Republican presidential nomination. He was fair game for rebuke, no question there. But did I illuminate his dark character, enlighten my readers or advance any worthwhile cause by comparing him -- repeatedly -- to the unstoppable entity in the horror movie “It Follows”?

No. I just swam with the snide tide.

I did that too often. Many columnists do.

I worried, and continue to worry, about the degree to which I and other journalists -- opinion writers, especially -- have contributed to the dynamics we decry: the toxic tenor of American discourse, the furious pitch of American politics, the volume and vitriol of it all.

Bruni’s focus on columnists is fair enough, but it could apply even more pertinently to so-called objective journalists who collectively lost their mind during the Trump years, lashing out at Trump, his supporters, and anyone who asserted conservative principles in public.

He assured readers that Trump is “an amoral, dangerous man who was unfit to be president" while revealing his misgivings about the extremes of the left.

Take the overlapping issues of cancel culture and free speech. Much of what I read is absolutist: Agonized laments about cancel culture are a cynically overblown right-wing diversion from grave injustice. Or woke zealots are conducting a quasi-religious purge.

I think either can be true -- depending on the circumstances and the details, which vary from case to case and prevent any summary judgment. So I haven’t written about cancel culture, not much. Yes, that’s cowardice. But to cut myself a bit of slack, it’s also a reasoned response to a marketplace that isn’t big on reason.

I think that campuses have gone way too far in quashing speech they don’t like, but I also think that some speech is so intentionally injurious and flamboyantly cruel that refusing to showcase it isn’t the defeat of constitutional principles; it’s the triumph of empathy. No single edict can govern all exigencies. But that’s a milquetoast column.

In other words, Bruni kept his head down so the online woke mob wouldn’t chop it off in their endless revolution.

Too many columnists generalize too broadly. I know I did when I wrote, in August 2019, about the tenacity of hate and I asserted that Americans who still opposed same-sex marriage “cannot bear the likes of me” and other gay people. A reader called me out on it, saying that there’s a difference between disagreeing with a position and detesting a person. He was right. But that distinction was lost in my excited prose.

So, one cheer for Bruni, though there’s quite a bit of anti-Republican vituperation to forgive over his decade as columnist.

He circled back to his crude Cruz column at the end (which Newsbusters also tagged at the time, for its portrayal of Cruz as a 'menacing, stalking, relentless” horror movie villain):

Its useful observations -- about his nullifying lack of collegiality, about his noxious self-righteousness -- were undercut by its hyperventilation. And I can’t chide politicians for ungracious manners and unsubtle minds if those inadequacies are also my own.