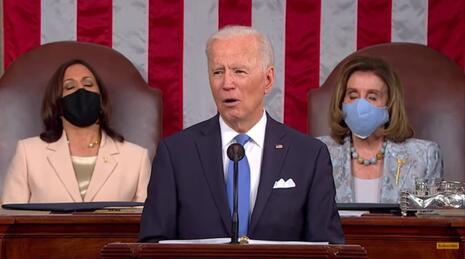 President Biden delivered his first State of the Union address, proposing three vast spending plans adding up to a $6 trillion dollar price tag, and the New York Times was awed by the historic nature of his “ambitious plans” that “could make him a transformational figure in American history,” according to White House reporter Annie Karni.

Economics reporter Jim Tankersley’s front-page “news analysis” strangely suggested Congress was once governed by “austerity politics” in “Betting a Country Tested by Crisis Is Ready to Invest in Itself.”

President Biden’s $4 trillion economic agenda might have seemed unthinkable as the United States was emerging from its last recession, when austerity politics still ruled the Capitol and even a Democratic president was reluctant to push huge tax increases on corporations and the rich.

But Mr. Biden has a significant chance of signing at least a large chunk of his plans into law this year, partly because of a pandemic that reminded many Americans that big government could deliver money to help sustain them and speed efforts to end the crisis.

What the president is promising from the government in the years to come is a long list of tangible improvements in Americans’ daily lives: smoother roads, cheaper child care, cleaner and more reliable electricity, more years of free schooling for toddlers and young adults, paid leave for workers whose lives are upended by illness and faster internet service in rural areas and elsewhere.

Those sweeping spending plans, which Mr. Biden made the centerpiece of his first address to a joint session of Congress on Wednesday, would be paid for by raising $4 trillion in tax revenue from high earners and corporations. While Republicans have begun complaining about that price tag, they have yet to galvanize a public backlash like the Tea Party movement that engulfed President Barack Obama’s administration a few months after he took office in 2009.

They also saw, in the depths of the coronavirus pandemic, a stark reminder of longstanding inequalities and fragility in the American economy.

Baker wasn’t starry-eyed about the legislative prospects of the “succession of costly proposals,” given the Democratic Party’s narrow margins in the House and Senate, but he also harped on “inequality.”

But as striking as anything else in the speech was Mr. Biden’s vision of a profound pivot in America’s eternal debate about the role of government in society. Four decades after President Ronald Reagan declared that government was the problem, not the solution, Mr. Biden aimed to turn that thesis on its head, seeking to empower the federal state as a catalyst to remake the country and revamp the balance between the richest and the rest.

In the midst of the paper’s ongoing fixation with “income inequality,” it’s odd to read accusations that the Republican Party is “fixated” on the remarkable success of Trump’s vaccine development strategy, Operation Warp Speed. In a real-time "fact-check” during Republican Sen. Tim Scott’s rebuttal to Biden, health reporter Noah Weiland proved incapable of giving Trump credit:

Senator Scott’s point that President Trump delivered the nation’s success with vaccines is one that Republicans have fixated on since President Biden took office. Many of the officials who helped develop, regulate and plan distribution of the vaccines are career employees. They worked for Trump and now work for Biden. This was a triumph of the American government.