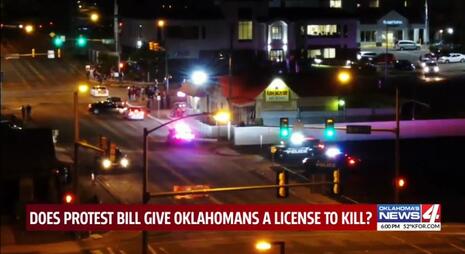 Republicans are proposing bills with tougher penalties for rioting and threatening protests. But the online headline of the New York Times story was designed for liberal clicks: “G.O.P. Bills Target Protesters (and Absolve Motorists Who Hit Them).” The print headline on Thursday’s front page was more sedate: “Republicans Sharpen Penalties For Protesters in Flurry of Bills.”

Reporters Reid Epstein and Patricia Mazzei warn of a "wave of new anti-protest legislation." These two never question the morality of blocking public roadways. Given that cars have been swarmed and vandalized and even had their passengers attacked by protesters, it would seem reasonable to protect the actions of threatened drivers who react out of fear. But that doesn’t stop the Times from portraying blocking thoroughfares as reasonable protest, and all the other Republican ideas as racist treachery encouraging violence against peaceful protesters.

The following paragraphs are straight Democratic talking points unleavened by scrutiny, accepting Democratic charges of “racism in policing and other forms of social injustice” as 100% true (although we’ll give them a half-point for a rare “Democrats seized” sighting).

But while Democrats seized on Mr. Floyd’s death last May to highlight racism in policing and other forms of social injustice, Republicans responded to a summer of protests by proposing a raft of punitive new measures governing the right to lawfully assemble. G.O.P. lawmakers in 34 states have introduced 81 anti-protest bills during the 2021 legislative session -- more than twice as many proposals as in any other year, according to Elly Page, a senior legal adviser at the International Center for Not-for-Profit Law, which tracks legislation limiting the right to protest.

Some, like Mr. DeSantis, are labeling them “anti-riot” bills, conflating the right to peaceful protest with the rioting and looting that sometimes resulted from such protests.

….The overwhelming majority of last summer’s nationwide Black Lives Matter protests were peaceful -- more than 96 percent involved no property damage or police injuries, according to The Washington Post, which also found that police officers or counterprotesters often instigated violence.

Most of the people who protested on Capitol Hill on January 6 didn’t actually commit violence against law enforcement officers, but no one in the press would argue the “overwhelming majority” of them were peaceful.

Most of the protests held across Florida last summer were also peaceful, though a few in Miami, Tampa and Jacksonville produced some episodes of violence, including the burning of a police car and a sporting goods store….

Epstein and Mazzei found a couple of respondents to call the proposals in Oklahoma and Florida racist (of course), then found a hysterical voice to condemn the Florida Bill.

….Moné Holder, senior director of advocacy and programs for Florida Rising, a social justice organization, said her team had spent a lot of time informing activists of their rights under their new law.

“It’s a tactic to silence our voices,” she said.

After the verdict was announced, she remained concerned about how the police would deal with community members if they chose to gather outside, to be together after an emotional year.

For most of 2020 the Times was hostile to protesters who “chose to gather outside, to be together” against overreaching lockdown edicts. But now Times reporters are passing metaphorical tissues to their left-wing interviewees.