New York Times liberal columnist Michelle Goldberg displayed some laugh-out-loud ignorance in her Tuesday tirade about election protests by Trump supporters in Michigan, “No One Expects G.O.P. Civility.” (And no one expects New York Times balance.) The text box gave the flavor: “Election officials are terrorized, and everyone shrugs.”

Perhaps you remember the terrible ordeal suffered by the White House press secretary Sarah Huckabee Sanders at the Red Hen in 2018. She was awaiting her entree at the Virginia farm-to-table restaurant when the co-owner, appalled by Sanders’s defense of Donald Trump’s administration, asked her to leave. This happened three days after the homeland security secretary at the time, Kirstjen Nielsen, was yelled at for the administration’s family separation policy as she tried to dine at a Mexican restaurant in Washington.

These two insults launched a thousand thumb-suckers about civility....

Somehow, though, few are asking the same question of Republicans as Trump devotees terrorize election workers and state officials over the president’s relentless lies about voter fraud. Michigan’s secretary of state, Jocelyn Benson, described her family’s experience this past weekend: “As my 4-year-old son and I were finishing up decorating the house for Christmas on Saturday night, and he was about to sit down and to watch ‘How the Grinch Stole Christmas,’ dozens of armed individuals stood outside my home shouting obscenities and chanting into bullhorns in the dark of night.”

So far, what happened to Benson doesn’t appear to be turning into a big cultural moment. There’s no frisson of the new about it; it’s pretty routine for Trumpists to threaten and intimidate people who work in both public health and election administration.

The radically different way the media treats boundary-pushing on the left and on the right is about more than hypocrisy or double standards. It is, rather, an outgrowth of the crisis of democracy that shields the Republican Party from popular rebuke. There’s no point asking if the G.O.P. can control its right. It has no reason to.

One can only conclude that Goldberg gets all her news from the New York Times. Does she really not remember the assault on Republican Sen. Rand Paul after the Republican National Convention? Or the Bernie Sanders’ supporter who shot up a ballfield of Republican congressmen in Alexandria, Virginia in 2017? The obnoxious protests outside the home of Senate Majority Leader Mitch McConnell’s house during BLM protests, or the home of Republican Sen. Lindsay Graham during the Supreme Court fight over Amy Coney Barrett? 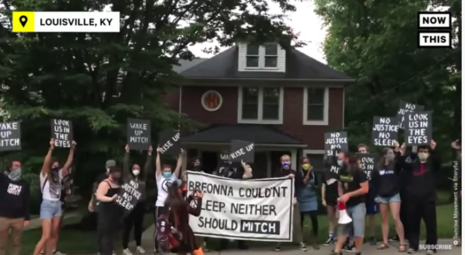 The Federalist in 2018 found plenty of threats to Republicans, and Breitbart gathered footage of left-wing thugs harassing and attacking attendees departing the 2020 Republican National Convention.

Blissfully ignorant of this, Goldberg then made up stuff about how alleged Republican “extremism” was covered.

Republican extremism tends to become a major story only when there are clear electoral consequences for it. Pat Buchanan’s demagogic culture war speech at the 1992 Republican National Convention was seen, at the time, as shocking, and elite Republicans later believed it helped George H.W. Bush lose the election….

Really? The press has found every Republican presidential administration or candidacy since Ronald Reagan to be extreme or racist, as the Media Research Center has documented.

As a result, the effect of right-wing fanaticism on mainstream public opinion has become a non-issue. It doesn’t matter if Biden voters don’t like paranoid militants, many of them armed, menacing civil servants….

Goldberg saw hope in a potential Democratic sweep of the Senate runoff in Georgia. Otherwise:

But unless and until that happens, few will be able to muster much surprise when Republicans condone the most outrageous right-wing thuggery, because few will expect anything else.

More hypocritical bias by omission came in a Wednesday news story, “Threats Against Election Officials Grow Alongside Trump’s Legal Losses.” The online headline: “As Trump Rails Against Loss, His Supporters Become More Threatening.” Those reporters also pretended that protests and loathsome death threats were invented by Trump fans. The article repeated the beef of Michigan’s secretary of state, Jocelyn Benson about protesters in her “very private, quiet residential neighborhood.”

It’s a good thing that left-wing/antifa-linked groups never invade “quiet residential neighborhoods,” huh? But even when they do, depend on the Times to ignore it.