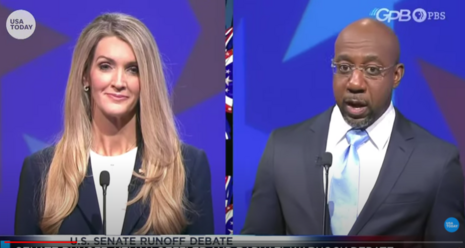 A “Political Memo” filed by New York Times political reporters Jonathan Martin and Astead W. Herndon slimed Trump voters as racists for focusing on radical Democrat U.S. Senate candidate Raphael Warnock. It's the latest attempt by the paper to push the Democrats to victory in the two vital Senate runoffs coming up in January in Georgia: “G.O.P.’s  Strategy? Attack Warnock.”

When Senator David Perdue of Georgia didn’t show up for a debate on Sunday night, he ensured two outcomes: Jon Ossoff, Mr. Perdue’s Democratic opponent, would enjoy free airtime unencumbered by attacks from his rival, and the other Senate debate that night would draw far more attention.

Handing Mr. Ossoff an open microphone, Republicans determined, was well worth the bargain.

As Georgians prepare to vote in two runoffs next month that will decide control of the Senate, there is little mystery as to which of the two Democratic candidates G.O.P. officials want to elevate as a target as they try to rouse their base: the Rev. Raphael Warnock, who is running against Georgia’s other Republican senator, Kelly Loeffler.

Ms. Loeffler made plain the Republican strategy when she called Mr. Warnock a “radical liberal” 13 times in their debate on Sunday evening. She repeatedly invoked his past criticism of police officers and a sermon in which he once said that “nobody can serve God and the military,” a theme that has roots in biblical passages.

Her plan of attack followed a similar portrayal by President Trump during his rally on Saturday in Valdosta, Ga., where Republicans played a video that likened Mr. Warnock to the Rev. Jeremiah Wright, the Chicago pastor whose comments drew scrutiny to his relationship with Barack Obama in the 2008 campaign. The video included footage of Mr. Wright famously saying “God damn America.”

Previously the Times ignored Rev. Wright, when he threatened to make trouble for Barack Obama's presidential campaign. Martin and Herndon can't avoid him, but did some mind-reading in Tuesday's piece and declared the Georgia GOP strategy of targeting Warnock and his radical allies as racist.

Making Mr. Warnock, the pastor of Atlanta’s storied Ebenezer Baptist Church, the face of the opposition for the Jan. 5 election -- rather than Mr. Ossoff, a young white documentary filmmaker -- represents a two-pronged strategy.

Spotlighting a Black candidate and linking him to the state’s most prominent African-American Democrat, Stacey Abrams, amounts to a strategy to motivate turnout among white conservatives, especially those who harbor racist views and are uneasy about Black leadership. Mr. Warnock would be the first Black Democratic senator from the South.

As if the Times and other outlets haven’t been promoting Abrams every week.

The run-against-Warnock approach, though, also takes a page out of the national Republican Party’s playbook for the 2020 campaign. Republicans found great success in down-ballot races, against mostly white candidates, by tying them to the most liberal figures and ideas in the Democratic Party -- like defunding the police, which Mr. Warnock does not support.

They defended Warnock in knee-jerk fashion, citing with approval his purposefully content-free ads.

Mr. Warnock recognized the onslaught coming his way and quickly released an ad previewing the attacks, suggesting Republicans would even claim he didn’t like puppies.

“I love puppies!” he declared as he stroked one in the commercial.

The reporters tried hard to paint radical Warnock as moderate.

Mr. Warnock emphasized his commitment to unity -- “I have worked my whole life to pull people together,” he said -- and sought to reassure voters in what is still a right-of-center state that he supported police officers.

Even if the Georgia Republicans can fully present themselves as checks on Mr. Biden, there are still risks in making Mr. Warnock their singular target. If the attacks have an air of bigotry, Republicans may turn off the coalition of moderates they are trying to win over in the runoffs. Many Georgians across racial lines are proud to claim a New South identity and may recoil from anything that smacks of overt race-baiting.

Martin and Herndon concluded by putting Loeffler on the defensive (“….Ms. Loeffler insisted she was not turning to racist appeals”) and closed with an overtly religious quote from Warnock they would have surely mocked if uttered by a GOP candidate:

Mr. Warnock hit back: “She’s lied, not only on me, but about Jesus.”