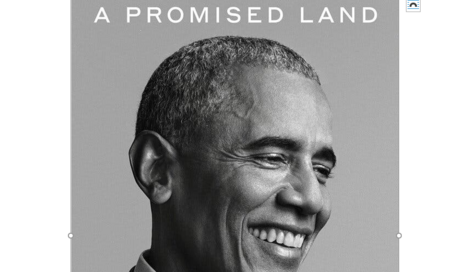 The New York Times Sunday Book Review led off with a lengthy, almost reverent take on Barack Obama’s latest autobiography A Promised Land: “Legacy of Hope,” a review by Nigerian-born novelist Chimamanda Ngozi Adichie. Her obeisant take took up five full pages of the section, devoting a stunning 4,500 words to what is admittedly itself an enormous book – (just south of 800 pages, and it’s only Part One).

A Promised Land even made the paper’s Ten Best Books of the Year list, accompanied by predictable fawning: “A Promised Land is the first of two volumes -- it ends in 2011 -- and it is as contemplative and measured as the former president himself.”

One can tell right away that Adichie’s take won’t be a merciless dissection of the subject or his self-referential work:

Barack Obama is as fine a writer as they come. It is not merely that this book avoids being ponderous, as might be expected, even forgiven, of a hefty memoir, but that it is nearly always pleasurable to read, sentence by sentence, the prose gorgeous in places, the detail granular and vivid. From Southeast Asia to a forgotten school in South Carolina, he evokes the sense of place with a light but sure hand.…

….His language is unafraid of its own imaginative richness. He is given a cross by a nun with a face as “grooved as a peach pit.” The White House groundskeepers are “the quiet priests of a good and solemn order.” He questions whether his is a “blind ambition wrapped in the gauzy language of service.” There is a romanticism, a current of almost-melancholy in his literary vision….

And what of that Nobel? He is incredulous when he hears he has been awarded the prize.

So accomplished, yet so modest!

Obama’s thoughtfulness is obvious to anyone who has observed his political career, but in this book he lays himself open to self-questioning. And what savage self-questioning….

This tendency, darker than self-awareness but not as dark as self-loathing, seems to have fed in him something charitable, a wholesome humanity, a deep generosity; it is as though he is both freed and ennobled by having dealt himself the severest hand. And so he is lavish with forgiveness and with praise, giving the benefit of the doubt even to those barely deserving….

The determined and deliberate Republican opposition to Obama feels astonishingly reckless in retrospect -- members of Congress oppose bills they haven’t fully read, merely because they are Obama’s bills. It does not matter to them what the consequences might be for the country. One cannot help wondering if Obama imagines what his administration would have been without the Republican rancor. What if the billionaire conservative ideologues David and Charles Koch had not convened their sinister-sounding conclave of some of America’s richest conservatives with the singular goal of strategizing how to fight Obama? What if the Republican hostility had not shaped the way the media, and consequently the public, viewed his administration?....

Yes, that hostile anti-Obama media. Also, how is it sinister for political activists to organize and fight for what they believe in!

This part doesn’t ring true with what we’ve learned about how he got his start in politics in 2004, with the incredibly convenient unsealing of his opponents’ divorce records -- twice.

There is, from the beginning, a sense that he is above the muck of politics. In the Illinois State Senate, a colleague doesn’t pressure Obama to support a less-than-ethical deal, because “Barack’s different, he’s going places.” 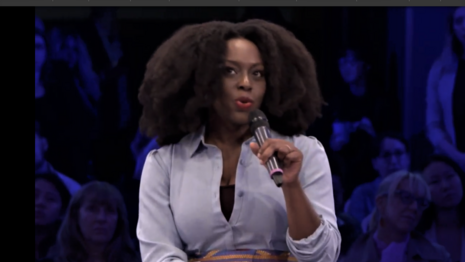 When Adichie does glimpse feet of clay, it’s when Obama isn’t sufficiently respectful of anti-American extremists like his own pastor, the Rev. Jeremiah (“God damn America!”) Wright. But any aggressive opponent of Obama is smeared as racist.

To reset the debate on the health care bill, Obama addresses a joint session of Congress. As he corrects the falsehood that the bill would cover undocumented immigrants, a little-known congressman named Joe Wilson, red with fury (racist fury, in my opinion), shouts “You lie!,” and in that moment he is partaking in that age-worn American tradition of a white man disrespecting a Black man even if that Black man is of a higher class….