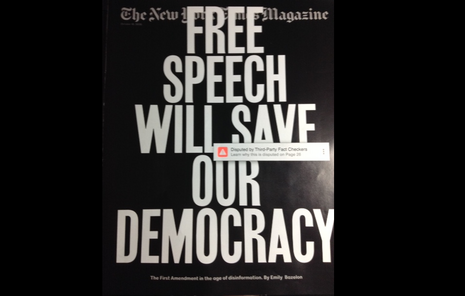 Emily Bazelon, staff writer for the New York Times Sunday magazine and a professor at Yale Law School, earned the Sunday Magazine’s newest cover story – an 8,000-word jeremiad against free speech. The cover itself was ironic and oh-so-clever: “Free Speech Will Save Our Democracy,” with an online-style warning label overlaid that suggests such thinking is naive: “Disputed by Third-Party Fact Checkers.”

Bazelon’s screed is more relevant and sinister now, after both Twitter and Facebook proudly censored a New York Post expose about alleged emails from Hunter Biden showing his father Joe had met with Vadym Pozharskyi, an adviser of the Ukrainian natural gas firm Burisma Holdings. That’s the firm that paid Hunter $50,000 a month to serve on the company’s board while his father served as vice president.

Bazelon saw a right wing using conspiracies and lies to steal the election for Trump.

The conspiracy theories, the lies, the distortions, the overwhelming amount of information, the anger encoded in it -- these all serve to create chaos and confusion and make people, even nonpartisans, exhausted, skeptical and cynical about politics. The spewing of falsehoods isn’t meant to win any battle of ideas. Its goal is to prevent the actual battle from being fought, by causing us to simply give up….Trump’s election put him in the position to operate directly through Fox News and other conservative media outlets, like Rush Limbaugh’s talk-radio show, which have come to function “in effect as a party press,” the Harvard researchers found.

While virtually every other news network and media outlet is part of the anti-Trump “resistance.”

It’s an article of faith in the United States that more speech is better and that the government should regulate it as little as possible. But increasingly, scholars of constitutional law, as well as social scientists, are beginning to question the way we have come to think about the First Amendment’s guarantee of free speech….

After laying out the “fundamentally optimistic vision” of the First Amendment, the author fully reveals the revised mindset, now popular at the paper, that the First Amendment at present is just a cudgel used by the rich for in their own self-interest. A peculiar position for a business that relies on the First Amendment, but in this case political ideology trumps journalistic principle.

The Supreme Court has also taken the First Amendment in another direction that had nothing to do with individual rights, moving from preserving a person’s freedom to dissent to entrenching the power of wealthy interests. In the 1970s, the court started protecting corporate campaign spending alongside individual donations. Legally speaking, corporate spending on speech that was related to elections was akin to the shouting of protesters….

If Trump’s deeply conservative third Supreme Court nominee, Amy Coney Barrett, is confirmed, the court will most likely become more committed to its path of using the First Amendment to empower corporations. Somewhere along the way, the conservative majority has lost sight of an essential point: The purpose of free speech is to further democratic participation….

Or so sayeth Bazelon.

The dearth of competition for factual accuracy among conservative outlets leaves their audiences vulnerable to disinformation even if the mainstream news media combats it….

As usual, it’s all Ronald Reagan’s fault, with media mogul Rupert Murdoch as his sidekick.

But public trusteeship for broadcast and diverse ownership began to unravel with the libertarian shift of the Reagan era. In the mid-1980s, the administration waived the F.C.C. rule that barred a single entity from owning a TV station and a daily newspaper in the same local market to allow Rupert Murdoch to continue to own The New York Post and The Boston Herald after he bought his first broadcast TV stations in New York and Boston.

She pushed back a little near the end, bringing up cancel culture and posing a good question aimed rather too politely at a shameful free-speech squelching incident at her own paper:

Why is Tom Cotton’s Op-Ed beyond the pale but not an October Op-Ed by Regina Ip, a legislator in Hong Kong, who defended police officers’ filling the streets and arresting hundreds of pro-democracy demonstrators?

But then she’s back to praising “authoritative sources” on the coronavirus pandemic, “like W.H.O. and the Centers for Disease Control and Prevention….” The disgraced World Health Organization covered up for Communist China and didn’t recommend mask-wearing until June.

Bazelon notoriously earned a reporter byline during the paper’s sordid coverage of sexual assault allegations against a teenage Brett Kavanaugh, despite clearly betraying her hostility toward the nomination on Twitter. Her scoop? Kavanaugh allegedly threw ice during a brouhaha at a Yale University bar in 1985.