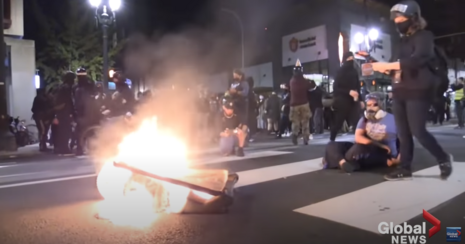 New York Times reporter Nellie Bowles has again committed journalism, on the front-page of Tuesday’s edition, no less. She’s a San Francisco-based tech reporter who has managed to provide close-up pictures of the real-time, real-world consequences of the often violent, destructive, anti-American “protests” taking place in Northwest U.S. cities. Her latest: “Protesters Pressure Bystanders to Choose a Side.” The text box captured more of the gist: “Movement Divided by Aggressive Approach Outside Homes.”

She even mentioned some of the pamphlets at one rally: “Why Break Windows”; “I Want To Kill Cops Until I’m Dead”; “Piece Now, Peace Later: An Anarchist Introduction to Firearms”; “In Defense of Smashing Cameras”; and “Three-Way Fight: Revolutionary Anti-Fascism and Armed Self Defense.”

In August, Bowles documented the thuggish threats against small business owners by Seattle antifa and other “protesters.” Now she’s turned her attention to the ongoing anarchist occupation of downtown Portland with anecdotes that capture the anti-American flavor of the movement:

Terrance Moses was watching protesters against police brutality march down his quiet residential street one recent evening when some in the group of a few hundred suddenly stopped and started yelling.

Mr. Moses was initially not sure what the protesters were upset about, but as he got closer, he saw it: His neighbors had an American flag on display.

“It went from a peaceful march, calling out the names, to all of a sudden, bang, ‘How dare you fly the American flag?’” said Mr. Moses, who is Black and runs a nonprofit group in the Portland, Ore., area. “They said take it down. They wouldn’t leave. They said they’re going to come back and burn the house down.”

Nearly four months after the killing of George Floyd by the Minneapolis police, some protesters against police brutality are taking a more confrontational -- and personal -- approach. The marches in Portland are increasingly moving to residential and largely white neighborhoods, where demonstrators with bullhorns shout for people to come “out of your house and into the street” and demonstrate their support.

These more aggressive protests target ordinary people going about their lives, especially those who decline to demonstrate allegiance to the cause. That includes a diner in Washington who refused to raise her fist to show support for Black Lives Matter, or, in several cities, confused drivers who happened upon the protests.

The same night the protesters came to the [flag-flying] couple’s door last month, they marched into Kenton’s commercial district and used restaurant picnic tables as fuel for fires. They collected the colorful wooden dividers the neighbors had recently built for outdoor dining and set those ablaze as well. Mr. Moses and others in the community ran into the protests with fire extinguishers.

Some residents in Portland say the tactics are escalating as the protests become increasingly dominated by white people, including anarchists and supporters of antifa, the diffuse collection of militant left-wing activists that has a strong presence in the region.

Bowles looked in on a BLM Portland event described as “an autonomously organized direct action march.”

They gathered in an unlit park in a residential neighborhood around 8 p.m. Everyone wore black, including some protesters who had on body armor and motorcycle helmets. They hastily set up picnic tables and supply booths in the dark, using cellphones for light to showcase their goods. There was a food table overflowing with protein bars and Monster energy drinks.

A small free literature selection was set up on the grass and overseen by three people in ski masks. It was a popular offering, and people crowded around, craning to see the pamphlets.

Titles included “Why Break Windows”; “I Want To Kill Cops Until I’m Dead”; “Piece Now, Peace Later: An Anarchist Introduction to Firearms”; “In Defense of Smashing Cameras”; and “Three-Way Fight: Revolutionary Anti-Fascism and Armed Self Defense.”

Bowles closed with an anecdote equal parts revealing and pathetic.

One white man stepped onto his patio clapping and hollering in support of the passing march. The group called for him to join. He smiled and waved them on, still clapping. They began to chant that he was spineless. He looked worried. But the march moved along, and he went back into his house.

“You’ll never sleep tight, we do this every night,” the protesters chanted.