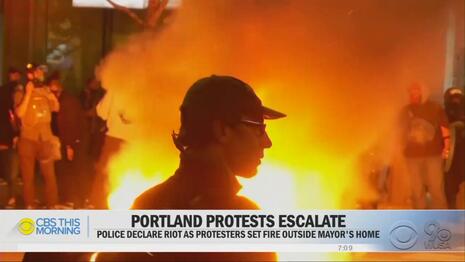 The New York Times’ front-page “news analysis” by Peter Baker and Maggie Haberman, “Fanning Strife With Kenosha In His Sights,” continued the paper’s pathetic pivot from ignoring violence at the “mostly peaceful” demonstrations in U.S. cities to blaming it on Trump, who is visiting Kenosha, Wisconsin, cite of the latest rioting, on Tuesday. The distortions started in the lead sentence.

President Trump has been throwing accelerant on the fire the nation’s social unrest rather than trying to put it out, seeking confrontation rather than calm at a volatile moment his advisers hope will help salvage his campaign for a second term.

Other presidents in times of tumult tried to settle down communities convulsed by racial and cultural divisions, but Mr. Trump has encouraged one side against another. He has threatened to deploy federal forces, condoned freelance actions by his own armed supporters, conflated peaceful protesters with violent rioters and used the strife to undercut his political opponents.

He plans to fly Tuesday to Kenosha, Wis., uninvited and unwelcome by local authorities in a state pivotal to the November election, to condemn what he calls “left-wing mobs” that are “marauding through our cities.” In his goal to cement his desired image as a “law-and-order president,” he will meet with the police and tour businesses damaged by rioting.

In Times-land, only newly roused Trump supporters have malign intent, not the leftist thugs who have been in the streets for three months:

Mr. Trump has hardly discouraged his own supporters, who have been traveling to protests itching for a fight. On Twitter over the weekend, the president justified the actions of his backers who fired at protesters with paintballs and pepper spray in Portland, Ore., calling it the natural response to the mayor’s failure to crack down.

The strategy is consistent with the president’s lifetime of provocation. From his time as a celebrity real estate developer, Mr. Trump has never been a conciliator, and he has long gravitated toward conflict and sought to escalate it. As president, he often plays to and amplifies racial divisions in the country.

Tuesday’s lead story by Katie Glueck took the other side of the coin, defending Trump’s November opponent in “Biden Confronts Trump On Chaos And Leadership -- Blames Him For Unrest -- Vehement Rebuttal in Pittsburgh as Contest Gains Momentum.”

Joseph R. Biden Jr. on Monday issued a forceful rebuttal to President Trump’s claim that the former vice president would preside over a nation overwhelmed by disorder and lawlessness, asserting that it was Mr. Trump who had made the country unsafe through his erratic and incendiary governing style.

Mr. Biden condemned the violence that has occasionally erupted amid largely peaceful protests over racial injustice, and noted that the chaos was occurring on the president’s watch. He said Mr. Trump had made things worse by stoking division amid a national outcry over racism and police brutality.

The address was Mr. Biden’s most prominent effort yet to deflect the criticism that Mr. Trump and Republicans leveled against him at their convention last week, when they distorted his record on crime and policing. And in a fusillade of tweets over the last 48 hours the president suggested Mr. Biden was tolerant of “Anarchists, Thugs & Agitators.”

Glueck indulged in offensive labeling of bigot Al Sharpton as a “civil rights leader,” who she found fit to cite warning Biden not to go too far criticizing rioters.