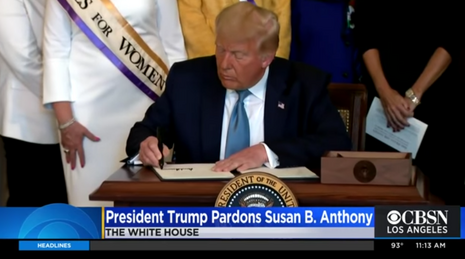 Donald Trump registered quite the achievement on Wednesday: He managed to make the avowedly feminist New York Times criticize renowned suffragist Susan B. Anthony in “With Eye on Election, Trump Plans to Pardon Women’s Suffrage Icon,” after the president announced he would mark the 100th anniversary of the 19th amendment, giving women the right to vote, by pardoning Anthony, who was arrested and fined for voting illegally in 1872. Maggie Haberman and Katie Rogers sniffed:

Unlike other people the president has pardoned, Anthony is not someone whose work Mr. Trump has spoken of during his campaign or his presidency.

She is also an increasingly divisive figure, adopted by anti-abortion forces and criticized for relegating Black suffragists to the sidelines. On Tuesday, Marjorie Dannenfelser, the president of the Susan B. Anthony List, an anti-abortion political group, and Cleta Mitchell, a lawyer who represents conservative groups, were in attendance as Mr. Trump made his announcement.

The day before, reporters Lisa Lerer and Jennifer Medina found another anti-Trump, pro-woman angle, hailing the “Wall of Moms” supposedly protecting peaceful protesters against racist policing in Portland: “Mothers Are Fed Up, and Democrats Aim to Get Their Vote.” (Mostly rage-filled left-wing mothers, evidently.)

With millions of American families facing an uncertain start to the school year, the struggle for child care, education and economic stability is fueling a political uprising, built on the anger of women who find themselves constantly -- and indefinitely -- expected to be teacher, caregiver, employee and parent.

Now, the rage moms are railing in Facebook groups about school shutdowns and in teacher union meetings about reopening without proper protection from the virus. They’re also packing virtual town halls with frustrations about schools, child care and the lack of leadership.
….

The pandemic is the spark but the backlash against Mr. Trump has been burning since the day after his inauguration, when millions of women joined protests across the country. Their fire has endured through #MeToo, waves of teachers’ strikes led by predominantly female unions, the outcry against school shootings, and Black Lives Matter demonstrations, a movement started largely by female racial justice activists....

The story is confused, asking readers to feel angry both on behalf of mothers who must act as teachers – and teachers’ unions who refuse to go back to the classroom, thus putting those mothers in that position in the first place!

The paper’s “Woman Wednesday” continued, as the paper led still more cheers for Joe Biden’s supposedly “barrier-breaking” pick of liberal Kamala Harris as his running mate, in a report by Audra D.S. Burch, Jennifer Medina, and Evan Nicole Brown: “Women Cheering Harris as One of Their Own: ‘Finally the Country Sees Us.’” Add “Left-wing” to the headline and it would have been accurate, given that the interviewees include a “Chicana consultant” (?) and an “Asian-American union organizer,” perhaps not a cross-section of America or even the Democratic Party.