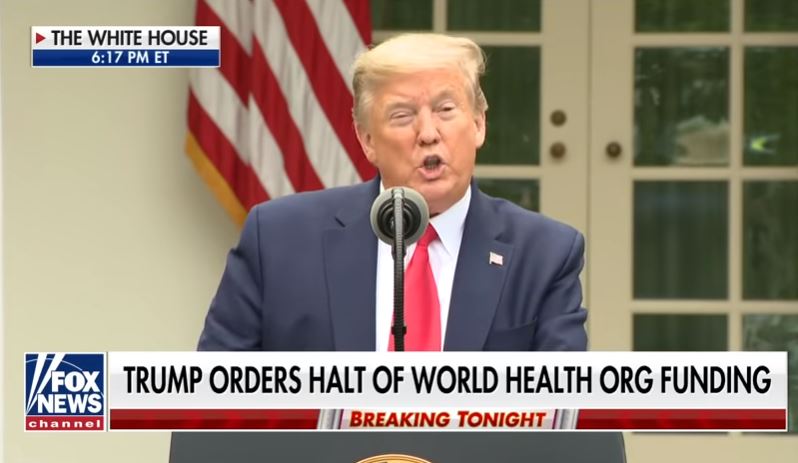 The liberal New York Times can be relied on for knee-jerk defenses of any international organization, so the headline over a story about President Trump ordering the United States to defund the World Health Organization was unsurprising: “W.H.O., Now Trump’s Scapegoat, Warned About Coronavirus Early and Often -- The World Health Organization, always cautious, acted more forcefully and faster than many national governmens. But President Trump has decided to cut off U.S. funding to the organization.”

What did surprise: Not all of the actual content of the Thursday morning story fit the headline’s predictable framing. Unflattering facts kept spilling out, although reporters Richard Pérez-Peña and Donald McNeil Jr. made excuses for W.H.O. and tried to shift the blame back on Trump.

With limited, constantly shifting information to go on, the W.H.O. showed an early, consistent determination to treat the new contagion like the threat it would become, and to persuade others to do the same. At the same time, the organization repeatedly praised China, acting and speaking with a political caution born of being an arm of the United Nations, with few resources of its own, unable to do its work without international cooperation.

Mr. Trump, deflecting criticism that his own handling of the crisis left the United States unprepared, accused the W.H.O. of mismanaging it, called the organization “very China-centric” and said it had “pushed China’s misinformation.”

But a close look at the record shows that the W.H.O. acted with greater foresight and speed than many national governments, and more than it had shown in previous epidemics. And while it made mistakes, there is little evidence that the W.H.O. is responsible for the disasters that have unfolded in Europe and then the United States.

The W.H.O. has drawn criticism for being too close to Beijing -- a charge that grew louder as the agency repeatedly praised China for cooperation and transparency that others said were lacking....

This bit was grimly amusing -- a claim that W.H.O.'s hesitance to call out individual nations is a frustrating “fact of life for United Nations agencies, which...have usually avoided even a hint of criticizing nations directly."

That would certainly surprise Israel.

They tried to neutralize the hits on the pro-China W.H.O. by turning things back on Trump, finding a Canadian professor to say that, even though W.H.O. flattered China:

“That in no way supports Trump’s accusation,” he added. “The president is scapegoating, dishonestly.”

The reporters even made a weak effort at “whataboutism.”

Whether or not China’s central government intentionally misstated the scale of the crisis, incomplete reporting has been seen in every other hard-hit country....

A running coronavirus update noted “Trump’s move to freeze aid to the W.H.O., supported by conservatives, draws criticism.” The paper did one of its obsessive content analyses which only ever targets Fox News.

Since mid-February, the Fox News Channel has published 49 stories about the W.H.O. on its website....